Plato’s Diotima as a Symptom of Psychosis by Stuart Dean

As I mentioned in my January 30, 2016 post, Grace Jantzen in Foundations of Violence makes a compelling case that Diotima is a fictional figure.  She does not, however, adequately distinguish her from the poetizing female figures Parmenides and Boethius portray as instructing them in their respective works.  If nothing else, the quality of the poetry of Parmenides and Boethius betrays the influence of a very real woman: Sappho.

By contrast, Plato essentially portrays Diotima as the personification of his philosophy–his metaphysics–and it is hard to believe there was such an ancient Greek woman.  Although the term ‘metaphysics’ derives from a neologism coined in Greek centuries after Plato and Aristotle lived, its meaning (‘beyond’ (meta) the ‘natural,’ or ‘embodied’ world (physics)) appropriately characterizes what Diotima and hence Plato’s philosophy is all about.  A key passage is where she characterizes the most intense love as “gazing at and being with” the beloved, without even the need to “eat or drink.”  That leads her to ask rhetorically whether it would not be best to gaze at what is not “infected” by flesh and blood (Symposium (211 d-e)). 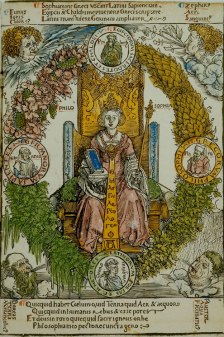 There is no precedent or parallel for what Diotima says in what is known of ancient Greek goddess worship, that is, what actual ancient Greek women believed and practiced.  Such worship emphasized (i) the priority of personal experience, (ii) the unique importance of each and every sense, including sexual feelings, and thus the entire body, to appreciating fully the significance of such experience and (iii) the interrelationship of different forms of communicating (participating in) such experience through poetry, dance, music, the visual arts and even the culinary arts.

While such worship also correctly recognized humans reproduce by the equal contribution of the male and female “seeds” (the “two seed theory”), nevertheless it recognized the unique importance of women with respect to what today would be a sophisticated medical practice comprised of various specialties (as discussed in my 11/5/2015 post on Phaenarete).

By contrast, Diotima’s portrayal of the true lover as not needing to “eat or drink” essentially echoes what is attributed to Socrates by Plato regarding the philosopher ignoring “eating and drinking” (Phaedo, 64d).  Her disparagement of physical love is consistent with Plato’s misogynistic characterization of women as a subaltern species of humanity (discussed in my 6/22/2014 post), who epitomize how mere matter (feminine in Greek as in Latin, matter is a derivative of mater) can never adequately reproduce the ostensibly masculine ideal.  Hence, seemingly ex nihilo appeared the “single seed” theory of human reproduction of Plato’s student Aristotle (discussed in my 5/3/2014 post), which also effectively justified men taking exclusive control of the practice of medicine away from women.

The abrupt and comprehensive reversal that Diotima thus constitutes from what is known of what real Greek women such as her putative contemporary Phaenarete believed and practiced is inexplicable.  Therefore, it would seem that whoever coined the term metaphysics to characterize Plato’s philosophy had a motive analogous to that of Plato in portraying Diotima as he does.  For absent at least the semblance of the logical progression to which metaphysics seems to refer, or the endorsement of Greek female spirituality that Diotima ostensibly provides, Plato comes across as just plain crazy.  Diotima is a symptom of his psychosis.

Appreciating the implications of his psychosis requires, as a threshold matter, a consideration of three interrelated issues.  First, because Plato’s influence began at a formative point in human history, his psychosis has by now been incorporated in varying degrees into a wide range of secular and religious beliefs and practices in such a manner that many do not even know it is there.  Second, as is the case with many mental diseases, those suffering from this psychosis may be reluctant to recognize it or the need to do something about it.  Third, given the nature of this psychosis, which consistent with Jantzen’s thesis, can be characterized as necrophilia or the love of violence, resistance to its identification, not to mention its eradication, is likely to be violent.

These considerations might well lead to the conclusion reached by Heidegger late in his life: “only a god can save us.” He seems to have begun to realize just how “disastrous” the influence of Plato’s metaphysics has been in 1926 after he was sent a copy of the Schellings’ Freedom Essay (for details on that Essay see my 4/6/2016 post).  While that essay turned his attention towards pre-Platonic thought, he failed to appreciate the relevance of goddess worship to it.  If he had appreciated its relevance, then given his influence at the time, perhaps the trajectory Germany was then on might have changed.  In any case, had he ultimately appreciated its relevance he would have at least concluded that “only a goddess can save us.”

Goddess worship, however, was not and is not about passively awaiting a metaphysical apocalypse.  It is not about being there but being here (cf. Arendt, haecceitas, Vita Activa).  Vital to that way of being is tasting–eating and drinking–exactly what Diotima denied was of importance.  Confirmation that taste may be essential to being if not holy, at least healthy (cf. heilig in German), comes from recent neuroscientific research.  For details see Gordon Shepherd’s Neurogastronomy, ‘Why Taste Matters,’ pp165-241.  It is notable that Shepherd feels the need to present this as a “new science” that refutes what “[m]ost people” think (p.3 & 12).  In doing so he unwittingly demonstrates the insidious way Plato’s metaphysics, as represented by Diotima’s psychotic disdain for food and drink, has been incorporated for so long and to such a degree that most people are unaware of ‘her’ presence.

The ignorance of the importance of taste seems to have resulted in the hypertrophy (psychologically at least) of the senses of sight and sound (the two senses Plato grudgingly respected relative to the others (Phaedo, 65b)).  An obvious example of this is modern computer technology, which is literally, and in many ways figuratively, tasteless. Both as compensation for and as a distraction from its tastelessness those profiteering off it present each new enhancement in the technology of video and audio stimulation as if one’s life depended on it.  Yet, to the extent such technology draws one into the necropolis that is its virtual reality the more one becomes dead to the real world.  How this relates to Diotima is, to paraphrase Sappho (S.16), ‘easy to demonstrate’: are not the almost exclusively female virtual voices of technology her daughters?

Like Loading...
‹ I Used to Paint All the Time by Natalie Weaver
Dear Mum by Jassy Watson ›