Reflections on Researching the Goddess Movement in Britain by Kavita Maya 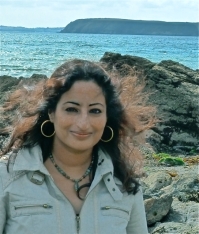 I’ve been asked by both academics and Pagans what inspired me to pursue doctoral research on the British Goddess movement: of the many ways that people first click with feminist politics, a story entwined with a ‘spiritual’ impulse might seem unusual, given the slow-to-change secular assumptions of mainstream feminism.

When I reflect on my history, two threads at the core of my early feminist identity leap out: one, the value of thinking and asking questions; the other, ‘feminist spirituality’, which for me describes a profound emotional, intellectual and creative investment in the struggle for a fairer, more inclusive world. Two early ‘click’ moments: as a child, asking persistent questions about the sexist gender roles modeled by those around me (and being told “You’ll understand when you’re older,” which I now recall with a grim irony), and—perhaps unusually—coming across the concepts of patriarchy, feminism and the Goddess by way of 1990s teen fiction about witches.

It was probably a combination of issues which inspired me, including the idea that women could be powerful even in the margins of a patriarchal society, and the importance of relationships between women in ritual circles and in ‘sisterhood’ (noticeably, queer/lesbian narratives seemed implicit but not openly represented). I remember feeling like I’d come across something uncannily important, signified by ‘the Goddess’. Retrospectively, it was no accident that the story which most fascinated me included women of colour: I didn’t come across many such stories without apparent stereotypes.

While exploring London’s Pagan scene and later during my fieldwork year among UK Goddess women connected to Glastonbury, I was often surprised when, after asking about my religious upbringing, people would sometimes say things like “But Hinduism already has goddesses” or “You’re lucky, your culture already has Goddess.” Surprised—because these were moments of misrecognition. I would explain that in my early discovery of Goddess feminism, it had not occurred to me to associate it with “Hindu goddesses” or “my culture”—whatever that is assumed to be. (As a native Londoner from a diasporic background, the phrase “your culture” always perplexes me.)

In fact I think it is important not to regard an imaginary traditional “Hindu Goddess culture” as somehow continuous with contemporary North American and European Goddess feminism, not least because this obscures the complicated manner in which representations of goddesses interact with gender, shaping femininity in conservative as well as empowering ways in different social and historical contexts, as interesting research into goddesses in Hindu nationalism points out.

I do think that Goddess feminism holds vital emotional and cultural resources for women who are drawn to it, and it has made an important contribution to my feminist consciousness. However, although I might prefer to think of goddesses in terms of feminist spirituality, this desire cannot not be imposed through Western or Eurocentric stories on a complicated world, nor pursued at the expense of a feminist politics which addresses the intersectional inequalities of gender, class, disability, race and (post)colonialism.

Such misrecognitions are examples of assumptions about ‘culture’, ‘religion’, ‘race’ and ‘the Other’ that people make in everyday encounters, in this case highlighting my identity as a non-white researcher in ways that could be uncomfortable. It isn’t possible to summarise all the issues at stake in this article, but some of the work in my doctoral thesis is an attempt to untangle the politics of these encounters and the social narratives which produce them, through the framework of feminist and critical race theory.

The work of critical theories of gender, class, disability, race and postcolonialism is, I think, about asking difficult questions of the various communities in which we participate, always connected to politics and social transformation, and is as much a mode of ethics as it is an intellectual framework. Engaging in questions about the politics of race within predominantly white communities has been challenging—both with Goddess women, during and after my fieldwork, and with members of other Pagan groups. Race in critical politics is not an essential quality (people have sometimes used the phrase ‘other races’ in unclear ways), but rather it is a product of racialisation, of histories of racism and colonialism. Critical race politics is concerned with how structural racism passes unseen, appearing ‘normal’—often through social mechanisms of resistance, silence and erasure. It continues to be a marginalised topic in Britain in spite of anti-racist movements, including black feminism.

In the 1990s, Goddess feminists Asphodel Long and Monica Sjöö wrote about feminism and began to address racial politics in Goddess spirituality. While they are remembered as ‘foremothers’, it seems to me that their political work within the early UK Goddess movement is being erased from its collective memory.

Recently, much-needed discussions have arisen among UK-based Pagan activists. A blog post by Léithin Cluan emphasises the need to listen to the voices of Pagans of colour (with links to PoC writing); a piece by Yvonne Aburrow on inclusive politics in Paganism responds to an article on the Pagan anti-Capitalist site Gods and Radicals by Rhyd Wildermuth, about the presence of ideas associated with the New Right within various Pagan traditions; and last year, doctoral researcher Jonathan Woolley, Druid activist Elizabeth Cruse and I co-organised an activist-academic workshop on the politics of contemporary Paganism at the University of Cambridge. These are only some first steps in what need to be ongoing conversations about gender, class, disability, race and colonialism in UK Pagan groups. We need to acknowledge the value of critical questions, and keep asking them—even at the risk of discomfort to ourselves and those in our networks.

Kavita Maya is a final-year PhD candidate at SOAS, University of London. Her doctoral thesis deals with a feminist and critical race analysis of the Goddess movement in Britain, based on fieldwork among the Goddess spirituality networks connected to Glastonbury, Somerset, the UK’s hub for countercultural spirituality. Her broader academic interests lie in the area of gender, religion and politics.