Home › Feminism › The Motherhood of God by Mary Sharratt

The Motherhood of God by Mary Sharratt

Doing a recent talk on pioneering woman writers, I like to do the Before Jane Austen test with my audience. Who can name a single woman writer in the English language before Jane Austen? Alas, because woman have been written out of history to such a large extent, most people come up blank. Then we talk about pioneering Renaissance authors, such as Aemilia Bassano Lanier, the subject of my recent novel, THE DARK LADY’S MASK, or her mentor, Anne Locke, the first person of either sex to write a sonnet sequence in the English language.

But my next question takes us even further back into history. Who was the first woman to write a book in English?

The answer is Julian of Norwich, who wrote Revelations of Divine Love.

We know very little about Julian. She was born in 1342 and died sometime after 1416. We don’t even know her real name. She was an anchorite–a religious recluse who was literally bricked into a cell behind the altar of Saint Julian’s Church in Norwich. She took her name from the church.

In patriarchal culture, male-dominated religion has served as a double-edged sword as far as women were concerned. On the one hand, mainstream religion relegated women to an inferior position. On the other hand, most of early women writers had a strong connection with religion and justified their writing as an expression of their sincere faith. Because they were writing about religion, they were allowed to write at all. And people listened to them.

Before Julian entered the anchorage, most historians believe she was an ordinary secular woman, who married, had children, and then become a widow. When she was 30, she became seriously ill and thought she was dying. As she lay in bed and prepared for her death, Julian had a series of sixteen mystical visions that she called showings. Then, seemingly miraculously, she recovered. After this had happened, she realized she could no longer go on with her ordinary secular life, and so she chose to become an anchorite.

After entering the anchorage, Julian spent the rest of her long life writing about her visions. She wrote two texts—first the short text and then the longer text, which became a substantial book of 63,000 words and 86 chapters. It was quite a radical and controversial thing to be writing a book of theology in English, rather than Latin, the official language of the Church. During Julian’s lifetime, John Wycliffe was declared a heretic for translating the Bible into English.

Julian’s book, Revelations of Divine Love, is very beautifully written and very accessible—direct and straightforward. As British cultural historian Dr. Janina Ramirez points out, if Chaucer was the grandfather of English poetry, then Julian is the grandmother of English prose.

He showed me a little thing, the size of a hazel-nut in the palm of my hand, and it was as round as a ball. I looked at it with my mind’s eye and thought, “What can this be?” And the answer came to me, “It is all that is made.” I wondered how it could last, for it was so small I thought it might suddenly have disappeared. And the answer in my mind was, “It lasts and will last for ever because God loves it.” 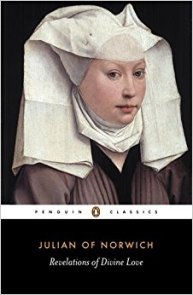 This is a very optimistic theology that is highly original and also radical. Julian wrote that God is mother as well as father, and that God is unconditionally loving and can never be angry at us. Most radically of all, she said no living thing will be damned to hell. That the only wrath that exists is in the minds of humans, not God. In Julian’s age, when the institutional Church so strongly emphasized sin and hell, her writings skirted the edge of heresy.

Revelations of Divine Love was copied by nuns and kept in various monastic libraries, but then suppressed in the English Reformation. It remained obscure for many centuries and was only rediscovered by a wider audience in the early 20th century when Grace Warrick, a Scottish suffragette, translated Revelations of Divine Love into Modern English and wrote a sympathetic, accessible introduction aimed at a secular audience. Only then was the book acknowledged as a literary masterpiece.

Today her best-known quote is widely known and as radically optimistic as it was in the 14th century:

Mary Sharratt is on a mission to write women back into history. Her acclaimed novel, The Dark Lady’s Mask: A Novel of Shakespeare’s Muse, drawn from the life Aemilia Bassano Lanier, is now in paperback. She is also the author of Illuminations: A Novel of Hildegard von Bingen, inspired by one of the most creative women of all time. Visit her website.

Like Loading...
‹ The Keepers and the Roman Catholic Church by Carol P. Christ
Let’s Talk About White Supremacy by Grace Yia-Hei Kao ›