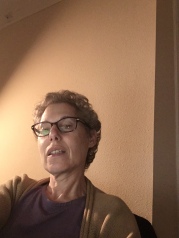 Intelligent and impish eyes took in my approach, and the little girl moved away from the post office doors. But not before I saw her sweet face with round cheeks still full of baby fat squished against the glass. With slightly messy, curly blond hair and wearing a shiny, deep purple, ruffled dress-up dress, she looked pretty, happy, and confident. This was her world, wherever she was. When I smiled, though, she turned away, shy of a stranger.

I got into the long line with my kid and listened to the little girl’s dad discuss gift card values with her older brother. The boy named an amount, and the dad commented about how expensive it was. “What a great way to teach a little economics and finance,” I thought.

I heard a new voice behind me, but I didn’t turn around to look. An older man coming into the post office, like me, admired the little girl in her purple dress. He told her how pretty her dress was and asked if she was getting married later in the day. Not like me, after all.

The dad continued talking with his son about the gift cards. Maybe he didn’t hear what the man said, or maybe he thought it wasn’t worth responding.

When I turned around and looked, I confirmed my guess. The speaker was an older, grandfather-aged man. I guess he was trying to compliment the little girl. At the same time, I wonder why he was perpetuating a cultural myth that limits women’s options. I’m sure he wasn’t doing this consciously. I hope he wasn’t. Regardless, I find the unthinking, unconscious nature of his teaching alarming.

We tell ourselves and each other stories all the time. These stories create our culture, reinforce it, even give it a reality and power beyond what is useful.

If women are going to have more opportunities and the ability to recognize and reach for those opportunities, we need to tell ourselves and our little girls new stories. And we—women and men, moms and dads, community elders of both genders—need to tell those stories in the face of elders perpetuating the old myths. Yes, even at the post office.

Marilyn R. Freedman is a freelance developmental editor and writer who practices Conservative Judaism and whose spiritual life is influenced by Buddhism. She holds a PhD in Experimental Psychology from Ohio University and a 2nd degree black belt in Taekwondo. She embraces a self-empowered approach to working with life challenges and most recently wrote I’m the Boss of Me: A Guide to Owning Your Career with author Jeanne Beliveau-Dunn. Marilyn blogs on social justice and spiritual issues on Medium @mrftr1.

Like Loading...
‹ Reclaiming Yourself From Domestic Abuse by Kitty Nolan
Honey: A Thousand Flowers by Mary Beth Moser ›