Part One of this post looked at connections between the cosmic dance and the Goddess Hera. To read it, click here.

Pythagoras was the first to call the universe by the Greek term kósmos, referring to the order, beauty and tranquility which are inherent in natural and universal geometric form and proportion. He described the cosmos as a single living being in which all things are related, including music, beauty, movement, and justice – much as the world was understood in the Neolithic Goddess cultures of Old Europe, of which more later.

The word kósmos (κόσμος) gives us the word kósmima (κόσμημα), jewellery – silver and gold like the moon and sun, with glinting gems like the stars and planets – as well as the word kosmitiká (κοσμητικά), cosmetics. These adornments were used by priestesses in classical Greece, not to emphasise their individual beauty, but rather to identify them in their public role as instruments of cosmic beauty, harmony, and order. This is the same role which dancers take on today when they don traditional costume to dance on ritual occasions such as Epiphany or Easter.
The principle of cosmic order, harmony and beauty is also known to us from Vedic philosophy, and this can help us understand the cosmic dimension of ritual dance. As I have written elsewhere, the words ‘rite’ and ‘ritual’ derive from the Sanskrit Ṛta, the principle of universal law or cosmic order.  Ṛta is the sacred principle of inherent goodness which provides the basis for moral order in society. It can also be translated as ‘ordered action’ or ‘that which has moved in a fitting manner’.

Ṛta is derived from the Sanskrit verb root ṛ- “to go, move, rise, tend upwards”, evoking the forward movement of growth, life, and progression which is the essential quality of dance itself. ‘The inherent goodness at the heart of the concept of Ṛta is another defining characteristic of traditional dance, which above all brings participants and onlookers a sense of joy and rightness, a body-based certainty that things in the world have their rightful place and all is unfolding as it should.'(8) The sacred task of upholding social order and correct behaviour was the domain of the Greek Goddess Hera, whom we discussed in the first part of this article.

This very strong sense of cosmic order, and human participation in it, may even be the reason why Balkan and Near Eastern circle dances move almost exclusively to the right. (9)  Of course there are many theories about this. For Armenians,  for instance, dancing to the right expresses happiness and joy, while movements to the left acknowledge grief, loss, drought, and war, and therefore are not danced at weddings or other joyful occasions. Others offer alternative explanations to do with the movement of the sun. Although we now use the terms clockwise/counterclockwise, deosil/widdershins, sunwise and against the sun to describe dance direction, personally, I am not convinced that Balkan and Near Eastern circle dances follow the movement of the sun; I think it more likely that it they follow the movement of the stars. If we return for a moment to our warm summer evening gazing up at the night sky, we in the northern hemisphere see the North Star, Polaris, as a fixed point or pivot around which the constellations revolve. The cosmos thus appears to rotate around the pole star in a circular movement towards the right – our dance direction. I think it is quite possible that ancient dancers of the Near East danced to the right as a reflection of this celestial movement. 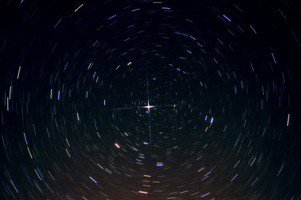 Because the cosmological year provided guidance for the agricultural year, knowledge of the celestial realm helped humans flourish in the earthly realm. We see this connection in the way that traditional dance is always accompanied by ritual food and drink. There is a similar custom in India, where blessed food known as prasad is given to pilgrims after a temple ceremony; not only nourishment for the physical body, prasad is also seen as the material substance which embodies the presence of the deity.

Thousands of years before the Vedic period, Neolithic people in Eastern Europe were making offerings of fruit and grain in connection with their sacred rituals. This practice continued through classical Greece and into our time. Each time a group of grandmothers offers a tray of little cakes and tiny glasses filled with homemade fruit liqueur, or each time the roasted chickpeas and sweet raisins – fruits of the earth mother Demeter – are passed around after the ritual fire-dancing of the Anastenaria, I am reminded of the ancient power of simple food to align the physical and human realm with the divine goodness and rightness of the cosmos. These are the gifts of the Goddess. 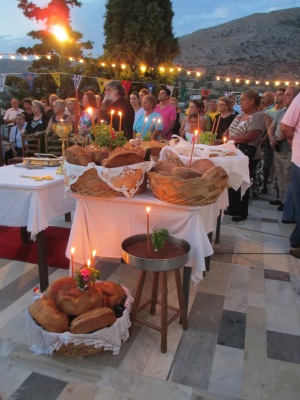 The shared feast may seem like a small thing, but it represents a profound philosophy: everyone is welcome in the circle, it is possible to transcend conflict and sit together peacefully, and we share what we have, so there is enough for all. This is the philosophy of the ancient Goddess culture of Neolithic Old Europe, in which I am convinced traditional circle dances have their roots. Feminist scholars including Gimbutas, Carol Christ, Riane Eisler, Heide Göttner-Abendroth and others have identified some of the core values of this culture as creativity, generosity, hospitality, connection, sustainability, mutual support, and peace. These are also the values of the dance.

As we come together to eat in this sacred tradition of hospitality, we affirm our place – however humble – in the wholeness of the cosmos. I am reminded of wise Grandfather Vasilis in the film Politiki Kouzina, who charmingly reminds us that the word gastronomy conceals the word astronomy. As above, so below, the ancient dances teach us, and everyone has their own unique place at the great cosmic table and in the grand cosmic plan. This is, for me, both the heart of my religious belief and the heart of my feminism.

My fervent wish this summer is that we will always have occasion to see each other as brothers and sisters in the human family, to help one another along the way, and to feast together under the stars. This year and every year, may we celebrate our connection with the cosmos, and drink a toast – in Jeremy Naydler’s lovely phrase – to the future of the ancient world.