Bees have been part of the human community since the days of prehistory. Cave paintings created by Neolithic people in Spain from between 6000 and 8000 BC show them gathering honey from wild bee colonies.

The earliest record of beekeeping in human-made hives dates back to Egypt of 2400 BC. 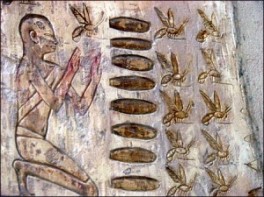 Bees themselves have been around for even longer than their association with humans. The oldest bee fossil was found in Myanmar enclosed in amber. It is 100 million years old.

Worldwide, Bee is a symbol of good luck, abundance, hard work and community. The ancients believed that the bees’ ability to make honey was a gift from the divine. Bees who give us their sweet honey –  used for food, drink and medicine – are found in myth and story all around the world. 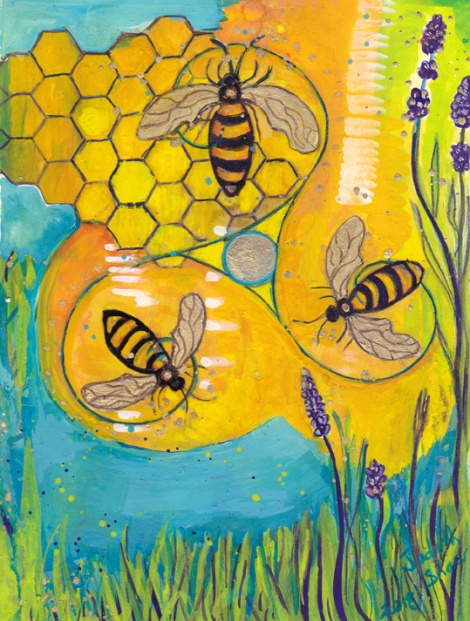 The Greeks, who knew only how to collect wild honey, inherited bee keeping from the Minoans, who

worked with and honored bees since the beginning of the Neolithic era. The Great Mother Goddess was often called “Melissa”, meaning “the Queen Bee.” In the myth and imagery of both cultures, associations of the Mother Goddess with the little honeybee are abundant.

The ancient Greeks also believed that bees were connected to the souls of the dead as they often made their hives in caves which were said to be the gateway to the underworld.

India’s ancient sacred text, the Rig-Veda, contains numerous references to bees and honey. The Indian Bee Goddess, Bhramari Devi, whose name comes from the Hindi word bramari, meaning ‘bees’, is said to make her home within the heart chakra. Here she emits the buzzing sound of bees. All across ancient India the humming of bees represented the essential sound of the universe.

To the ancient Celts bees were viewed as beings of great wisdom – messengers with the ability to travel to the Otherworld and bring back messages from the gods. The Scottish Celts of the western isles believed that bees reflect the knowledge of the druids. Highlanders believed that a person’s soul would leave the body in the form of a bee while sleeping or in a trance.

These ancient beliefs show the relationship between Bee and Inspiration. Bee calls you to be open to messages from the spirit world. Through Bee’s association with souls and their skill as messengers between the worlds Bee might be bringing you divine messages. When Bee appears let divine inspiration flow into and influence your life.

Bees are also sacred to the Celtic Goddess Brigid. The Celts believed that bees and their sweet nectar came to Earth from Brigid’s apple orchard in the Otherworld.

Attributes that are very important to consider when Bee appears to guide you are Hard Work/Productivity and Community. Bee speaks of focused energy. Hear Bee’s call to keep everything in order and everything will fall into place.

A bee colony is made up of one Queen, tens of thousands of female worker bees and several hundred male drones.

The Queen only leaves the hive once in her life which can last for up to five years. During her first spring of life she takes her “maiden voyage” in which her goal is to be impregnated by as many drones from other hives as possible. She returns to spend the rest of her life in the hive, cared for by the worker bees, as she lays millions of eggs – an average of 1500 per day and up to 2500 a day in the busy summer months.

The female worker bees, who live for about six weeks, do all the work. We’ve all heard the expression “busy as a bee.” They are diligent workers, focused on their many ongoing tasks. A single foraging honey bee flies up to 1.3 miles a day. They collect nectar and pollen to nourish themselves and their young. This process not only provides for the bee colony but also pollinates many flowering plants, allowing them to produce fruits,vegetables and seeds, which in turn nourishes our human community.

The male drone’s only purpose is to impregnate a queen from another colony. They live for up to four months and are never allowing to survive the winter in the hive.  Not all drones get to mate but the ones that do die in the act of mating.

The honey bee, originally from Europe and now in North America, can have colonies comprised of over 60,000 individuals. But the colony really exists as a community. No one individual could survive alone. And their community is based on hard work and productivity.

When Sweet Honey Bee calls your name take a moment to look at your own work ethic and productivity.  Now is the time to focus your energy and work hard to reach your goals.

Bee also calls you to remember that you are part of a community. It is not the time for rugged individualism; it is time to recognize that your strength lies partly in connection and community.

Another important aspect symbolized by Bee is communication. Honey bees communicate with each other by dancing. It’s called the Waggle Dance. With their figure 8 dancing movements they are able to communicate the exact location of a new food source. When Bee appears to you consider how well you are communicating your thoughts and ideas. Use your skills of communication to help reach your goals.

In addition bees do not like loud noises, quarreling or arguments. Remember that as you communicate – speak softly and seek a positive resolution for all.

When Bee calls to you know that it’s time to find your focus and commit energy to productive hard work and effective communication, allowing abundance and prosperity into your life. Be open to messages from the spirit world and to divine inspiration. May the little golden, buzzing bees bring you the blessings of hard work rewarded, community and inspiration.

Judith’s deck of Celtic Goddess Oracle Cards is available now.  You can order your deck from Judith’s website-click here. Experience the wisdom of the Celtic Goddesses! 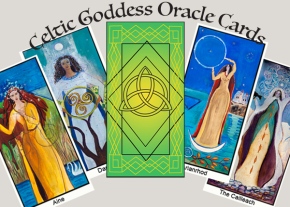 Judith Shaw, a graduate of the San Francisco Art Institute, has been interested in myth, culture and mystical studies all her life. Not long after graduating from SFAI, while living in Greece, Judith began exploring the Goddess in her art. She continues to be inspired by the Goddess in all of Her manifestations. In recent years Judith became very interested in the Goddesses of her own ancestors, the Celts. She is now working on her next deck of oracle cards – Animal Guides. Originally from New Orleans, Judith makes her home in New Mexico where she paints as much as time allows and sells real estate part-time. Give yourself the gift of one of Judith’s prints or paintings, priced from $25 – $3000.