Home › Earth-based spirituality › A Total Eclipse of the Moon by Carol P. Christ

A Total Eclipse of the Moon by Carol P. Christ 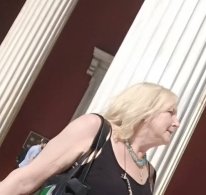 The morning after the July 27 total eclipse of the moon, I wrote:

I am a-mazed and still in awe. Last night I saw the eclipse and the blood moon from my favorite tavern in Pachia Ammos. We pulled the table out from the roof shelter and positioned our chairs so that we were looking at the high mountains where the moon came up, almost full, the night before. The mountains are sheer exposed rock that seems to have risen up from the sea. In the evening light they were bathed in the rose glow of the setting sun.

I read that the eclipse would last from 8: 22 until 2: 28, but at 8: 22 the moon was still hidden behind the mountains. Soon someone shouted, “it’s coming,” pointing to lacy clouds capping one of the peaks that had suddenly become luminescent. The clouds disappeared leaving only a faint light emerging from behind the mountain. When the moon finally rose about 9, the eclipse had already begun. It looked like someone had taken a small bite from the lower left side of a cookie. It was very white and there was no sign of the promised red moon. Mars was positioned to the lower right of the moon, so large and so bright I had mistaken it for Saturn a few nights earlier.

This eclipse was not to be sudden, partial, or fleeting. We watched for more than an hour as the little bite at the side of the moon grew larger. It was not until 10: 30 that the moon began to turn red, first light red and gradually darkening until it became orange red, the color of dried blood or rust. As the last silver of the white moon was covered, the moon hung in the sky, round and red, for another hour, not changing. Then without warning a white crescent reappeared at the top right of the orange red moon, gradually growing until the red moon disappeared into blackness.

We sat in silence transfixed for hours, not knowing what was being revealed to us, not wanting to miss a single moment. 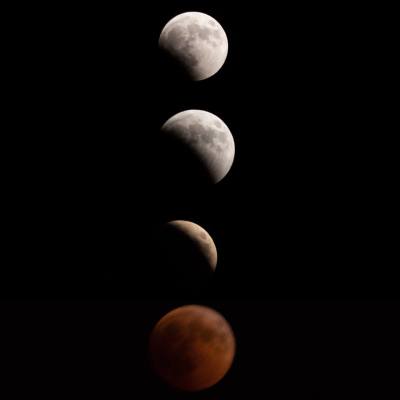 When I wrote about the eclipse, I knew there was a missing piece. It came in an email at the time of the next full moon, from the Oracle of Los Angeles who was on the spring Goddess Pilgrimage to Crete. She wrote:

I feel like this eclipse season has opened up a passage in you, to clear away old debris, old hurts and wounds. The peace settling in your heart and mind now, a result of your TRUE CONVICTION in your worthiness and lovability, has opened you like a flower.

The eclipse of the moon was mirroring a deep transformation within me.

Near the top of Mount Lasithi a month earlier, my body suddenly collapsed as I was coming out of the Dictean Cave. Minutes earlier at the bottom of the cave, I had been fine. All of a sudden I felt like I did not have the energy to climb the few remaining stairs. My nose began to bleed profusely. I did make it out of the cave, past the ticket booth and the waiting donkeys, to a shaded bench part way down the mountain, where I drank some water, but not before one of the donkey women, looking very concerned, offered me her donkey.

One of the women who helped me negotiate the slippery path near the donkeys is a healer. I asked if she could give me some energy. The hands she placed on my shoulders moved down my backbone where they stopped below my waist. She said I was releasing very old pain in the form of a dense energetic goo. She kept her hands on my lower backbone for some time, finally announcing that my energy was clear. My nose stopped bleeding. I dabbed my face with water and asked if I looked OK. I was told I looked radiant and shining with great beauty.

In her email, the Oracle continued:

Spirit sent me the image of a hibiscus, shivering with bees. She knows how alluring she is with her bright colors and sweet nectar. She knows that she will be showered with love; there’s nothing she needs to do. Spirit tells me this flower is YOU.

Like the moon, I journeyed into the darkness, covered myself in red blood, and returned, glowing more brightly than ever.

No wonder I was transfixed watching the moon’s journey.

Carol P. Christ is an internationally known feminist writer, activist, and educator currently living in Lasithi Prefecture, Crete. Carol’s recent book written with Judith Plaskow, Goddess and God in the World: Conversations in Embodied Theology, is on Amazon. A Serpentine Path: Mysteries of the Goddess is on sale for $9.99 on Amazon. Carol  has been leading Goddess Pilgrimage to Crete for over twenty years: join her in Crete. Carol’s photo by Michael Bakas. Carol will be speaking at the 25th Anniversary Celebration of the Re-Imagining Conference at Hamline College in St. Paul Minnesota on November 1 and 3 and at the Parliament of World Religions in Toronto, Canada on November 5.

Like Loading...
‹ When Silence and Speech both Burn Too Much by Marisa Goudy
A Better World is Impossible Today (#WETOO) by Adam F. Braun ›