Home › Bible › On Vayelech, Its Context and Theodicy by Ivy Helman

On Vayelech, Its Context and Theodicy by Ivy Helman 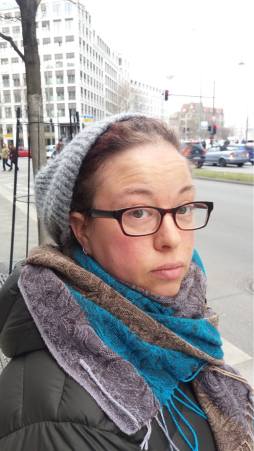 The Torah parshah for this week (to be read on 15 September) is Vayelech (Devarim/Deut. 31:1 – 30).  September 15th is also Shabbat Shuvah (return), the Shabbat that falls between Rosh Hashanah and Yom Kippur.  It is the time of the year when we focus on repentance for all of the ways in which we have failed to live up to G-d’s standards.

Perhaps it is fitting then that this parshah is also preeminently about how our ancestors believed they continually failed to live up to G-d’s standards.  It concerns itself quite repetitively with three things: one, the passing of the leadership of the Israelite community to Joshua and G-d’s last requests of Moses, two, the rants of a jealous G-d who already knows of the Israelites betrayal and, three, an invitation for the entire community (Israelite and non-Israelite men and women and children) to hear the words of the Torah and Moses’ song (which follows in Duet. 32).  This is prefaced by the occasion of Moses’ birthday as well as the reminder that Moses can’t enter the Promised Land.

My first thoughts about this passage went directly to context and how the ancient world thought deities behaved.  Gods get jealous when they aren’t obeyed.  The wrath of the deity brings punishment (most often in the Torah in the form of other civilizations armies).  And, then, most often, the cycle repeats.  This is theodicy, or explanation for why suffering and evil occur.  This particular one is quite common in the Torah: we must have done something wrong to deserve our current situation.  It has also been a common theodicy within Judaism.

Well, it was a common theodicy.  That is until the events of World War II, when no act or misbehavior could justify the death of 6 million Jews as some form of divine punishment or some type of atonement.  Yet, to return to it for the purposes of this parshah, this theodicy has a method for breaking this repetitive cycle of sin and punishment.  If one changes their ways, stops misbehaving and offers atonement (usually in the form of some type of animal sacrifice or grain offering at the temple), then they can be blessed by G-d instead. 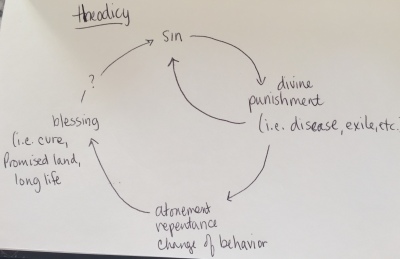 Let’s look at a common example.  In the ancient world, diseases were thought to be the result of divine punishment for misbehavior.  Changing one’s ways, repentance and atonement could cure said disease!  (There is a lot in the Torah about leprosy!)

Something similar is happening here.  However, we have to remember that the Torah was written down historically long after the events that occurred, when the Jews were in exile in Babylonian.  According to this theodicy then, it makes complete sense that G-d would know before the Israelites even entered the land that one day they would lose it.  What did the Israelites do wrong to warrant their punishment?  According to this parshah, they disobeyed G-d.  Clearly their disobeyal of G-d was self-evident justification of their punishment: exile from the land.

With that said, this parshah is saturated with the cultural mileau of the ancient world and how it understood deities as well as misfortunes, evil and suffering.  It’s hard to find kernels of wisdom in the midst of such preoccupations.  Yet, there are some messages that continue to speak to us even today.  First, there are two characteristics of G-d worth mentioning that differ considerably from jealousy and wrath.  Although I’m afraid that if you were to blink, you’d miss them.  First, G-d is always with us.  That’s verses 6 and 23.  Second, G-d delivers on promises.  That’s verse 20.

In addition, there is a vision of an inclusive community within the Promised Land.  Israelites and non-Israelites regardless of age or sex must be present at the reading of the Torah.  The Torah is not the property of one group or one community but is shared by all.  Likewise, this is unique as it speaks to the idea of shared accountability to behave according to the standards of justice outlined in the Torah.  Why?  Because everyone will have heard them.

So, despite the ancient patriarchal milieu which saw gods as wrathful and jealous wielding power-over as well as understood disease as punishment for misbehavior, there are some parts of this parshah that can still speak to us today.  More importantly, they allow for further reflection.

Like Loading...
‹ Three More Herstorical Divas to Die For by Mary Sharratt
A Prophet in Our Midst: Vandana Shiva by Carol P. Christ ›