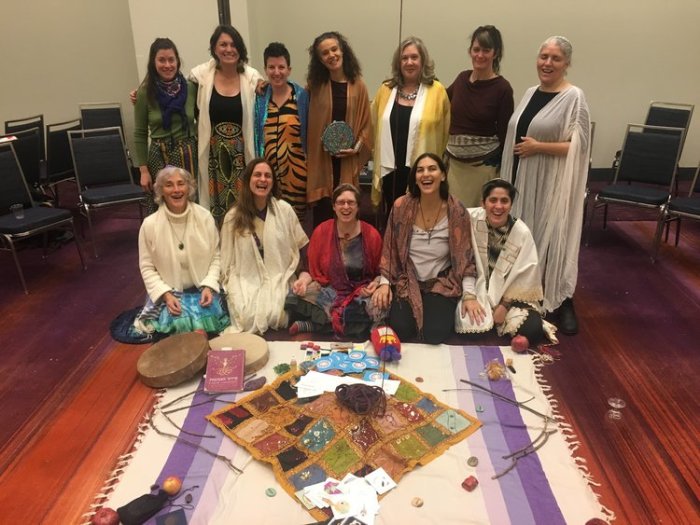 During the first week of November 2018, 12 graduates and current students of the Kohenet Hebrew Priestess Institute attended the Parliament of the World’s Religions in Toronto, Canada. The Parliament is a conference with a 125-year-old history that has grown to an estimated 10,000 participants representing more than 200 spiritual traditions. To share a Jewish feminist perspective with the Parliament’s attendees, we sought to create moving experiences and  intimate spaces through a variety of invited and informal initiatives.

Many of us were slated to speak at the Parliament, and rather than just show up and give an academic presentation on a panel, we brought the feminist spirit of Kohenet into our sessions, moving rows of chairs to create a circle, guiding participants through embodied practices rather than giving speeches, and crafting ritual.

Kohenet Ariel Vegosen stepped out from behind the podium to connect with the audience at a panel discussion about pluralism, sharing her journey to gender queer identity. Emerging Kohenet Bekah Starr shared her Hamsas for the Divine Feminine illustrations at “Soaring Spirit: A Women’s Art Salon”. More than 15 sacred artists presented their work and discussed how their different faith traditions inspired their art. In another session titled “Sacred Weaving,” Bekah and  Kohenet Annie Matan, called forth the weaver archetypes from many traditions and invited participants to mystically and physically experience weaving. Honorary Kohenet Rabbi Rayzel Raphael introduced participants to her Shekhinah Oracle deck. Kohenet Rae Abileah co-led a ritual session called “Women, Justice and the Environment” and also spoke on a panel of women at “Sacred Arts: Creative Expressions of Faith to Heal a Threatened Earth.”

Although climate and the environment were important 2018 Parliament themes and the focus of many sessions, Kohenet Rae’s session was one of the few that guided participants outside to engage in a ritual at the nearby Lake Ontario. The Kohanot were active participants at myriad Parliament sessions, weaving connections between faiths, between people, and forging new relationships.

Kohenet Rae and a group of clergy created a dedicated sacred space for climate grief and hope, bringing the Climate Ribbon global storytelling ritual installation to the Parliament. The Climate Ribbon greeted Parliament-goers with a grove of trees strung with brightly-colored ribbons, and a table on which a simple question appeared: What do you love and hope never to lose to Climate Chaos? Participants wrote down their personal answers to this question (alongside their name, age, and hometown), and tied their ribbon to the grove of trees. Then, looking through all the ribbons tied there, they found a stranger’s story that moved them, untied it from the Tree, and carried it with them throughout the Parliament. In the process of this sacred story-exchange, they became the guardian of what someone else most loves that’s under threat from Climate Chaos — and in order to protect it, they made a vow to take action for climate justice and a renewable energy future. This sacred space drew in participants to not only make ribbons, but also to pray and make music together. 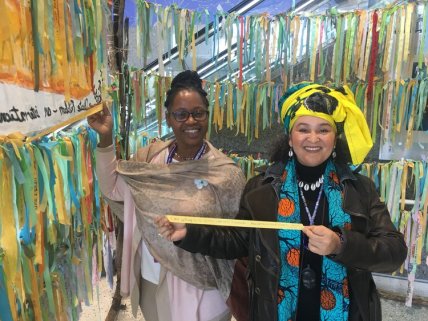 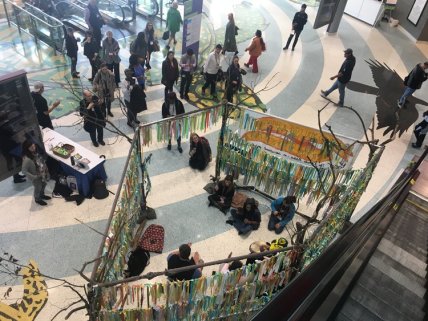 On Shabbat morning we led Shacharit services. To create the intimate setting though which we connect to Shekhinah and each other, we arranged chairs in concentric circles around our altar and suspended the symbolic yarn umbilical cord connecting the heavens to our gathering. To our joyous surprise, over 50 people showed up at 7 a.m. to pray with us. We opened with song, drumming, and a land acknowledgement, honoring that we were gathered on the traditional territory of the Mississaugas of the Credit River First Nation. Jews of many backgrounds have experienced a sense of geographical and cultural displacement over the years. We acknowledged our history of displacement, and the ways in which we as non-indigenous peoples and settlers have benefited from colonialism, former and ongoing which has hurt and oppressed First Nations peoples. We prayed for forgiveness and right action. We prayed with our hearts, bodies, and words, and participants from many traditions were moved to do the same.

It was the first time that we were gathering to daven shacharit since the horrific shooting in Pittsburgh’s Tree of Life synagogue one week prior. Before reciting Kaddish, Kohenet Elizabeth Berger called in the names of the 11 Jews murdered in the Tree of Life Synagogue, as well as the two people murdered at the Kroger supermarket in Jeffersontown, Kentucky after their shooter’s failed attempt to enter a church. We also called in the names of three teenage youth killed in Southern Gaza the previous week.

The Divine injected Herself into our Parliament experience though countless unexpected and joyous moments.  Just as we were preparing to make kiddush and motzi at the end of our service, a Pagan priestess leading services in the conference room next door entered with a large platter of honey-soaked bread and a goblet of fresh apple juice. In another spontaneous gesture, we sang songs from our liturgy through the halls of the conference center, making our way to the Red Tent, a sacred space dedicated to women at the conference. Following our lead, many other women in the space brought songs from their own traditions.  We were so moved by that experience that we elected to once again sing through the halls at the conclusion of the Parliament, singing Rav Kohenet Shoshana Jedwab’s “Where You Go,” a song of inclusion based on the Book of Ruth.

Whether facilitating sessions, speaking on panels, guiding ritual and prayer, creating sacred spaces, singing loudly, witnessing plenaries, relaxing in the Red Tent, Kohenet was a presence at the 2018 Parliament of the World’s Religions, and we hope to gather priestesses for many more interfaith conferences and events in the future!

We are so grateful to Kohenet Keshira HaLev Fife who had a huge hand in organizing the Kohenet delegation to the Parliament and was unable to attend as she attending to her Jewish community in Pittsburgh in the aftermath of the shooting. 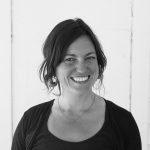 Rae Abileah is a social change strategist, author, editor, ritual facilitator, and advocate for collective liberation and economic justice. She is a trainer and contributing editor at Beautiful Trouble (www.beautifultrouble.org) and she is the co-creator of the global Climate Ribbon (www.theclimateribbon.org) storytelling art ritual project. Rae is a contributing author to numerous books including Beautiful Trouble: A Toolbox for Revolution; Beyond Tribal Loyalties: Personal Stories of Jewish Peace Activists; Sisters Singing: Blessings, Prayers, Art, Songs, Poetry and Sacred Stories By Women; and Siddur HaKohanot: A Hebrew Priestess Prayerbook.www.raeabileah.com @raeabileah

Bekah Starr is a Sacred Artist (https://www.bekahstarrart.com/) exploring connections to divine feminine mysticism through the lens of the Kohenet Hebrew Priestess Institute. Her sacred arts explorations include fine art, illustrations, altar crafting, sacred weaving, participatory community installations, and more. Bekah is a weaver of communities, a songress and a ritualist creating magical mystical empowerment opportunities for womxn. She created an altar card deck inspired by the 13 Netivot called Hamsas for the Divine Feminine. She lives with her family in the beautiful Hudson Valley of New York.

Full list of ordained Kohanot and students who were at the Parliament:

Like Loading...
‹ This Is What Rape Culture Looks Like: Part 3 by Carol P. Christ
Emotional Policing from Within: Choosing Right Relationship Over Being Right on FAR by Lache S. ›