I wish, desperately, that you were still here.  I miss you everyday. My body aches with grief. Tears run down my face.

It was so hard to say goodbye.  Sometimes, I feel like I should have done more.  I always thought you’d live to be older even though you made it to (nearly) 16.  I couldn’t imagine life without you. Some days I still can’t.

But, the vet said you’d broken your jaw, probably from cancer.  You struggled to walk from the arthritis and now your balance was off.  The medication we put you on to help the infection in your jaw caused you to not eat for two days.  You were so skinny. I couldn’t even keep you comfortable anymore. You cried so much. I knew, even though I didn’t want for it to be time, it was.

Nevertheless, it was an agonizing decision – to put you to sleep.  I wish I hadn’t had to have done it. But, I know that you’d tried and I’d tried, Hana tried and the vet tried.  There just wasn’t anything else anyone could do.  So, Hana and I chose compassion to end your suffering.

That surely doesn’t make it easier.  You were my constant companion for an amazing thirteen and a half years. And, until Hana entered my life, you were the one stable part of it.  You left a big hole in my heart when you took a piece of it with you to wherever you are now. You also set a terribly high standard for any other dog that would come into my life.

It’s been five months since you’ve been gone.  Life just hasn’t been the same. We’ve missed having you around and thought that maybe getting another dog would help heal some of our sadness. 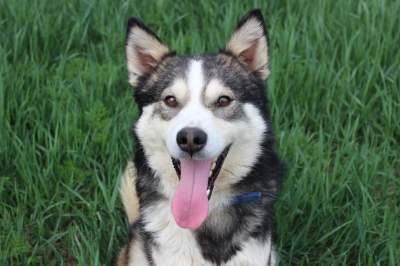 So, three weeks ago, we said hello.  His name is Huckleberry Hafík.  He just turned two.  We adopted him from Slovakia close to the Tatra mountain region you so loved.  Someone had found him wandering on the border between Hungary and Slovakia. He spent five days alone on the streets before someone was able to catch him.  He’s a husky mix, and probably, according to Hana, also part border collie. He’s about 20% bigger than you were, but still small for either breed. After we picked him up from the shelter, we spent our first week together hiking those same trails we walked with you only a year and a half ago.  We already told him all about you.

Many people think he looks like you.  I did too initially.  In fact, when Hana had first suggested adopting him, I immediately said no as he reminded me too much of you.  But, as the months past, I came to believe that maybe those reminders weren’t such a bad thing. It’s nice to be reminded of you. It makes me smile.  He does look an awful lot like you. 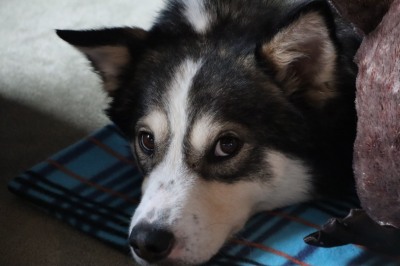 He also acts like you often.  For example, he’s obsessed with your sister Gabbi, not that that would surprise you.  You two were always quite cat-and-dog like until the end when she’d sit with you to comfort you.  He also loves the taste of her food. Big surprise, huh? You loved it too! He’s quite determined like you were too, and can be quite stubborn when he wants to be.  Sound familiar?

But, he’s different too.  He’s not as independent as you were.  Quite the opposite actually. He doesn’t like when we aren’t around  He’s also a cuddle-monster. He absolutely loves belly rubs. Can’t get enough actually!  That’s different. He also doesn’t care much about eating as you did. Sure he loves bones, but his regular food he’d pass on.  His ears don’t stand up as permanently as your ears did. He can move them a lot more. And, he’s considerably more nervous about every situation and every change.  You always went with the flow.

Hana and I talk about you often, perhaps even more so since Huckleberry’s arrival. It’s hard to remember that he’s not you, and we can’t expect him to be.

Hana thinks you led us to Huckleberry somehow, that you helped us pick him, that you had some role to play in us being his parents, and maybe you did.  I’m not sure one can do those things once you’ve died.  However, I hope there is more to life-after-death than my logical brain often convinces me there is.

Anyway, my dear.  I should be going for now.  Your brother needs to go out.  Wherever you are and whatever you are doing, I hope there is no more pain and that you’ve found some peace.  Maybe you feel like you are sleeping well. Maybe you’ve been happily basking in the sun and chasing ducks to your heart’s content.  Maybe you imagine us there with you taking hikes through the mountains. Maybe you are playing like nuts with Maverick, Lily and Addie.

You live on in our memories and always will, my little girl.  We love you. Goodbye for now.

Like Loading...
‹ Declaration of INTER-Dependence by Mary Sharratt
Grief, Have I Denied You? by Carol P. Christ ›