Home › Activism › ERA—Equal Rights for Women—in the US: Has Our Time Finally Come? by Carol P. Christ

ERA—Equal Rights for Women—in the US: Has Our Time Finally Come? by Carol P. Christ

On August 26, 1970, I borrowed an old VW bug from my mentor and summer employer Michael Novak to drive from Oyster Bay, Long Island to New York City to take part in the Women’s Strike for Equality march down Fifth Avenue. Some 50,000 women attended the march and another 50,000 took part in sister actions around the United States. The march celebrated the 50th anniversary of the passage of the Women’s Suffrage Amendment that gave women the right to vote. The ERA was on our minds, but it was not the only issue on the feminist agenda. We believed that all the walls created by patriachy would come tumbling down, and soon! 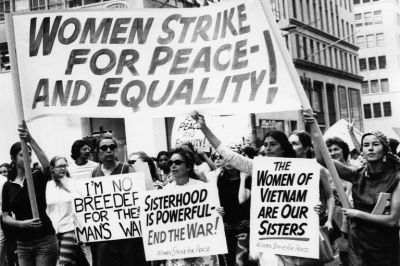 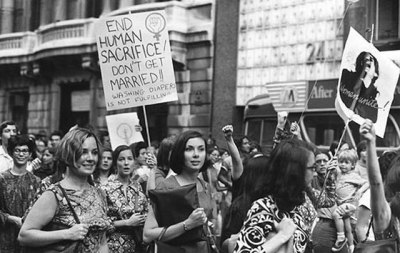 In those days, feminism was an unfamiliar idea and feminists were often objects of ridicule. Esteemed news anchor Eric Sevareid called feminism an “infectious disease” and labeled the marchers (I suppose that includes me!) “a bunch of braless bubbleheads.” Nonetheless the cause of women’s rights had widespread bipartisan support among lawmakers. Following a suggestion by Democratic Congresswoman Bella Abzug, Republican President Richard Nixon declared August 26 “Women’s Equality Day.”

In February 1970, the National Organization for Women sat in at the offices of Congress calling for a hearing on the Equal Rights Amendment. On August 10, Representative Martha Griffiths introduced the ERA in the House, where it was passed but not taken up by the Senate. Reintroduced by Rep. Griffiths, the ERA was overwhelmingly passed by both houses of Congress in 1972, and it was endorsed by Nixon, who asked the states to approve it. 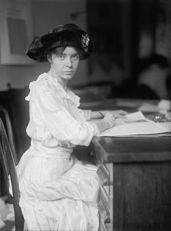 This was not the beginning of the struggle for equal rights for women in the United States. The ERA was an outgrowth of work for the vote and women’s rights that began in the 1840s. In 1923 suffragists and socialist feminists Alice Paul, founder of the National Women’s Party, and Crystal Eastman, founder of the Women’s Peace Party, delivered the original version of the ERA (which Paul revised in 1943, this wording becoming the text of the current amendment) to Congress.

When the amendment finally passed in 1972, it was widely believed that it would easily become law before the 1979 deadline that was arbitrarily attached to it.

The fact that the ERA has not yet been passed can be attributed to a well-educated married white woman, lawyer Phylis Schafley, who, funded by the insurance industry, unions that feared women would be sent back to sweat shops, and conservative interests in general, launched the STOP ERA (Stop Taking Our Privileges) campaign. The anti-ERA movement was supported by Southern whites, Evangelical Christians, Mormons (Sonia Johnson was excommunicated for supporting the ERA), Orthodox Jews, and Roman Catholics, including the National Council of Catholic Women.

With the deadline approaching, 35 states had ratified the amendment (with 4 rescinding the ratification), while 38 were needed for passage. The deadline was extended until 1982, but no new states passed it during the extension.

In the 1990s, a “three-state strategy” emerged. It proponents argued that when the 38 states ratified the ERA, it would be up to congress to decide whether or not to accept the ratification. They noted that states had passed amendments after the deadlines in the past, but that these ratifications had not been questioned. They also stated that there was no precedent for states to rescind ratification.

In 2009, the National Organization for Women supported the three-state strategy. Nevada ratified the ERA in 2017, followed by Illinois in 2018, leaving only one more stated needed. In November 2019, Virginia Democrats gained control of both houses: Virginia is widely expected to ratify the ERA in 2020.

The Virginia legislature was flipped from Republican to Democrat due in no small part to house-to-house campaigning by the grass-roots organization Indivisible that formed in reaction to the election of Donald Trump. My good friend and longtime feminist co-conspirator Ellen Boneparth was part of this effort. If the ERA passes, we will owe a debt of gratitude to her and others who have been knocking on doors over the past few years.

If Democrats win both houses of Congress in 2020, legislation to remove the ratification deadline will pass. It would then be up to the Supreme Court to decide whether or not to hear the case–that would surely be filed–alleging that Congress had no right to extend the deadline. The court could decline to rule on the case, thus indirectly affirming the ratification of the ERA. Or it could rule.

The equal rights amendment, in sum, would dedicate the nation to a new view of the rights and responsibilities of men and women. It firmly rejects sharp legislative lines between the sexes as constitutionally tolerable. Instead, it looks toward a legal system in which each person will be judged on the basis of individual merit and not on the basis of an unalterable trait of birth that bears no necessary relationship to need or ability.

May we knock on every door in the United States in 2020 in order to ensure that Donald Trump and his collaborators are thrown out of office in the greatest Blue Wave ever. Maybe then the time will finally come when women’s equality under the law will be affirmed in the United States Constitution! This would not be the end of women’s struggles to be treated as fully human, but it would indeed be a milestone worth celebration after all these years of women’s work.

Unattributed facts in this blog can be found in an exceeding scholarly entry “Equal Rights Amendment” in Wikepedia.

Like Loading...
‹ Teaching After the Getty Fire by Sara Frykenberg
Poem: She Works Hard for the Money and a Working Class Dream by Marie Cartier ›