The Storyteller by Sara Wright 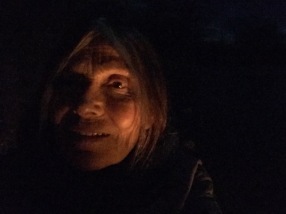 When I walked into the space a bolt of light shot across the room and struck me so forcibly that it felt like it shattered the cells beneath my skin. Did this occur before I glimpsed her bronzed moon shaped face? I will never know. I sat down almost in front of her, sizzling with the uncomfortable buzz that seizes my nervous system when what I call, the Powers of Nature, have taken over my body/mind. I gazed at her in a dazed sort of way. She wore silver and white, and the two sharply contrasting hues shone so brilliantly my eyes ached…

As she began to speak about the Navajo Blessingway, I drifted effortlessly into a light trance in spite of the static. Honeyed words poured out of her mouth as she slipped from her Native Dine’ language into English and back again; creating a profound musical intonation that made it difficult for me to concentrate on the stories. Initially. All that music. Layers upon layers. I had entered the Forest of Enchantment.

Blessingway stories are focused on hearth and home and are told only in the winter usually in cycles of two or four, helping tribal members to “re–member” (as in to render all the parts whole) who they were, they are, and who they shall become. All these stories occur simultaneously in one present, the Now.  And all are nestled the context of Nature who is ‘home’ to all “the People.” All Dine’ relatives are composed of human ancestors but also embrace mountains, water, air, trees, animals, insects, stars as relatives -every conceivable aspect of Nature is included.

The Storyteller told a family story that I loved – a poignant tale about how her people became part of the Bluebird Clan. Once these birds inhabited this country in all four directions and so the people chose the Bluebird as their animal familiar. Unfortunately, because Dine’ men served in the U.S. military they were forced to change their name. To belong to a Bluebird Clan made no sense to white people in power.

Some of the other Storyteller’s first stories also made us laugh. This woman ever so skillfully and effortlessly wove her family tales of joy, laughter, and sadness into one whole.

Although she has traveled extensively in her 30 years of Navajo story telling she comes from the matrilineal Salt-Water Clan and lives in New Mexico. Every child born in this clan belongs to the mother’s family.

This remarkable woman has worked not just within her own tribe but has functioned as part of an extensive network of Native people who until recently believed (some no doubt still do) that the only hope for peace and Earth sustainability lies with people of all races coming together with a single clear intention to begin to listen. Hope is embodied in the golden thread that places the well being of the planet before the individual creating a contextual reality for all humans to live. Perhaps with this radical shift of perspective westerners could begin to hear Nature’s cries?

The Storyteller focused on the relationship between the human and not human world in all her stories. She spoke of the powers of the eight directions N, S, E, W, and the four that lie in between. She made a point of speaking about an experience she had with a bird – Robin – who came to her that very afternoon, making it clear through her tale that the signs are there, ready to be read by the person who is capable of receiving. Nature is always speaking; it is people who are not listening.

Holly, a bear I know who reverses perspectives just like I have.

In western terms I would call The Storyteller an eco-feminist because the she knows that what happens to the animals and plants will also eventually happen to humans.

She made a radical statement: “Stop having children!” No doubt this remark incited anger or disbelief in some even when every other human and non -human species is in some kind of trouble because too many people are presently living on a planet that can no longer support them. So many are suffering and dying. The Storyteller says Americans live within a protected bubble. Or at least they did.

The tragic consequences of human hubris and arrogance are now becoming only too apparent she continues. Regardless of personal intent, ethnicity, race, each of us participates in the Earth’s crisis through our actions. We drive cars, burn wood, fossil fuels, wear petroleum – based clothing, clog our oceans with plastics. Our current president may be a monster, she believes, but he is also a mirror in which each of us can see the shadow side of ourselves, offering us a unique opportunity to own our complicity. We are participating in our own demise with each act of denial, blindness, indifference, including the refusal to be accountable for the problems we have created.

Worse from the Storyteller’s point of view is that westerners have deliberately silenced Nature by dismissing her as irrelevant. We use her, but have stolen Her Voice. Nature has absolutely no say in what happens to her as her forests are raped and set afire, her waters, soil, air poisoned, her mountains mined, her animals and plants deliberately murdered, imprisoned and treated as non sentient beings.

The Storyteller informs us that all aspects of Nature are speaking to her and other Native people revealing to those who can stand to live in the truth of ‘what is’ that the time for human extinction is drawing near.

Some would consider this the voice of doom, but is it? She reassures us that our beloved Earth will out live human destruction; the planet will recover from our species’ acts of unspeakable violence and carnage. I personally find this line of thinking hopeful.

About halfway through the storytelling when the story became darker and I began to weep listening to her words, the Storyteller’s eyes started boring into my own. She spoke of the technological damage of cell phones, conversed comfortably in the normality of telepathic communication and “read” the future of humankind with compassion, love, and deep humility, sorrowing as she spoke. We have twelve years she said, eight before things get much worse.

I could feel the buzz intensify to an unbearable pitch as her words penetrated my body. Towards the end she looked directly into the eyes of my heart and said twice, “you will live to be eighty”. My hair caught fire; she knew.

I had been crackling in the flames ever since I entered the room. Now I understood that this was because I was about to receive personal “life instructions” including further validation that my extensive research, my thinking, my intuition, sensing, listening, my dreams regarding the catastrophic loss of animals and plants (and what this would ultimately mean for humans) were sound and true.

Once I received this knowledge it penetrated every bone and sinew; my body was finally able to relax. I felt myself psychically collapsing like a rag doll.

We hugged tearfully after The Storyteller’s presentation. As we held one another immense courage and strength flowed between us. I thanked her for her truth telling and afterwards I could articulate the obvious; this woman was a seer.

For me an extraordinary reversal with profound implications for living the rest of my life had occurred this winter solstice night. It may have occurred for others as well. Many in attendance were exposed to truths they might not have wanted to hear. Some denied much of what the Storyteller said turning the whole thing into an uplifting experience. Others, more sensitive and open to receiving, wept.

Like the Storyteller, I will continue to do the small things I can to leave a lighter footprint on the Earth. I will also continue to accept responsibility for being part of the problem – we are in too deep. Yet I will also persist, offering deep gratitude and experiencing joy when any living creature, tree, plant, ant, dog, bird, deer, chooses to converse with me.

At the same time I honor myself as a woman of great strength, vulnerability, and integrity, a woman capable of loving, one with a ‘pure heart’ as someone told me recently.

By placing myself squarely in the here and now, I hope to become a better receiver, while accepting that my life and the age of the Anthropocene may be coming to a close sooner that I expected. Native time occurs in cycles so the ‘twelve years left’ may be metaphorically expressing the end of an era that could last longer in western linear time…

Either way the end is in probably in sight. As the Storyteller made clear human extinction is inevitable.

And some part of me breathes a sigh, ever so deep, in stark relief that this should be so.

Like Loading...
‹ The Matricide Basic to Patriarchy’s Birth by Carol P. Christ
Spirituality and Happiness by Gina Messina ›