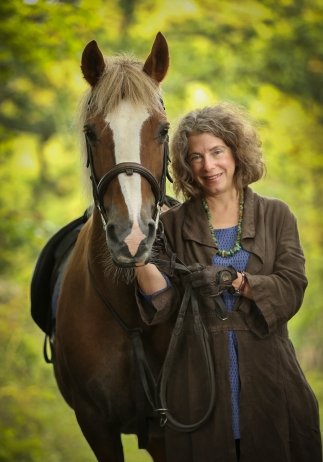 Five years ago, before peer pressure made me reach for the henna.

When I turned forty, my hair started going seriously gray. Fearing that this would make me look “old,” I drank the Koolaid and hopped straight onto the wheel of hair dyeing samsara, getting my hair professionally colored every six to eight weeks. This, alas, proved to be a very expensive and time-consuming obligation. I am not one of those women who views going to the salon as “pampering.” Quite the contrary. I would much rather be writing novels or pampering my pony.

The salon I frequented in those days, which has since gone out of business, had an alarming tendency to play nonstop Miley Cyrus videos. Sitting under a heat lamp with dye on my hair, I was truly a captive audience and could not run away, and the volume was so loud, it was impossible to read or even think. Subjected to such horrors, I could feel my brain cells slowly and painfully dying off, even as my hair was being dyed. I tried changing salons, but they all seemed to have the same loud, annoying soundtrack.

To compound this, my hair grows so fast, the gray roots would be visible two weeks after each dye job and then I had use root concealer to hide the evidence. Finally my scalp would take no more and I developed a skin intolerance to commercial hair dye. That, and one Miley Cyrus video too many, tipped me over the edge. I decided to jump off the hair dyeing merry-go-round and go naturally gray. By this time, I was approaching fifty.

After reading numerous blogs and websites by other women who were also fed up the dyeing, I made the long, awkward transition of growing out my roots for nearly a year, then getting a pixie cut and growing that out. I thought I would be free. My husband fully supported the natural me. My noble steed loves me no matter what I do to my hair. Young women didn’t have any problem with it. But women my own age and older were giving me a very hard time with such undermining commentary as, “Ooh, you’re so brave! I could never just let myself go like that,” or “You looked a lot younger when you were dyeing it,” or “I’m not ready to look old yet.”

Why are women so horrible to other women? Why would any woman get so worked up about another woman’s hair choices? Did my gray hair come as an unwelcome reminder that they, too, were aging and that no amount of salon appointments could ever reverse this?

On the other hand, I understand that some women genuinely enjoy the whole salon experience and do indeed consider professional hair coloring to be pampering. Power to these women! Just please don’t hate on those of us who wish to walk another path.

My darkest gray hair experience was encountering the ugly specter of age discrimination for the first time in my life. My gray hair barred me from a Vienna night club I wanted to visit with my friends. The door person said I was refused entry because I was wearing trainers, but they were letting in countless young people with trainers. I also discovered that every time I went to Manchester city center, I became a magnet for aggressive charity muggers, or street fundraisers, who apparently view older women as soft targets. It’s a different form of street harassment than the sexualized harassment younger women face.

Eventually all this pressure wore me down. I also had my 2016 novel The Dark Lady’s Mask, which was about to be released. I was worried my novel wouldn’t do well if its author looked too “old.” So I leapt back onto the wheel of hair-coloring samsara, but this time with a natural blend of organic henna and indigo that didn’t irritate my scalp. Since I put the henna on myself at home, it was much more affordable and there was no forced subjection to brain-destroying music videos.

My acquaintances who had been so uncomfortable with my gray hair were much relieved and complimented me on looking so much “younger” again. The henna made my hair strong and shiny. I grew out a long red witch mane that became my trademark. But my hair was still growing so fast that the roots were visible after two weeks of hennaing and I still had to do the same dance with root concealer. 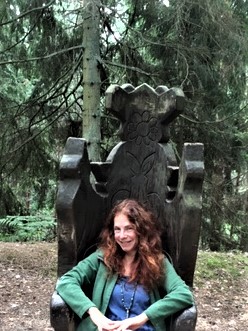 My witchy henna mane. Just don’t look too closely at the roots!

When I turned fifty-five in November last year, something snapped. If I didn’t have the courage to go gray now, when would I? Would I still be faffing around with henna and root concealer in my eighties? I decided I was done. I would use up my last box of henna, but that was it. I don’t know any man who has ever been bullied into coloring his hair because his friends said he would look too “old” otherwise. So why should I cave into bullying and shaming?

My last henna job was in early December 2019. After three months of growing out the roots, I bit the bullet in early March, marched into a salon with no annoying music, and asked for a short, choppy pixie. The enthusiastic young stylist was excited to take on the challenge, for it was a radical transformation. My hair had become quite long. She spent a full hour cutting and chipping away to give my super short hair texture. In the end I had a cut that was radically stylish and freeing.

It felt quite liberating to let all that hennaed hair fall away, as though I were shedding an old skin, an old identity that no longer served me. It’s staggering to contemplate the price I had to pay for buying into the collective delusion hair color can bestow eternal youth. The belief that I had to play along with this charade to win the approval of other women.

I hope I can stick to my resolution this time. I do intend to grow out a long witchy mane again eventually, but this time in silver. 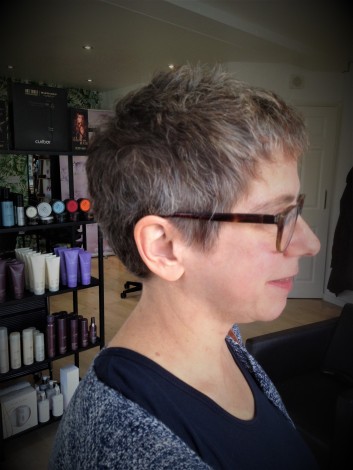 Mary Sharratt is on a mission to write women back into history. Her most recent novel Ecstasy is about the composer Alma Schindler Mahler. If you enjoyed this article, sign up for Mary’s newsletter or visit her website.

Like Loading...
‹ Insights on Sisterhood: An Offering to the Great Goddess by Eirini Delaki
Women’s Circles Need Well-Established Structures to Ensure that Everyone’s Voice Is Heard by Carol P. Christ ›