Post-Hysterectomy Reflections: Not All Women Bleed by Ivy Helman 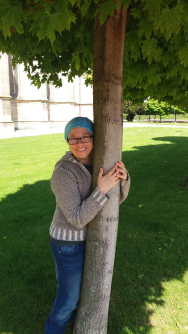 Around the age of 8, or maybe 10, I learned my aunt had had a hysterectomy.  I remember visiting her house either shortly before or after the operation.  I can’t remember which, and it doesn’t really matter.  At the time, I don’t think I even knew what a uterus was or that I too had one.

Just like me, she had suffered from uterine fibroids. This year, at the end of May, after nearly two years of various treatments including a failed myomectomy and ineffective prescription medication, I followed in her footsteps.  It was really the only option for me, although it was not an easy decision.  After surgery, there was the usual post-op pain and restrictions, but luckily my body has been healing well.

Since the surgery, and as I prepare to teach “Gender and Religion” again in the fall, I’ve been thinking about a conversation I had with a student the first time I offered the class at Charles University.  We were about to begin discussing the article, “Why Women Need a Feminist Spirituality,” by Judith G. Martin, when a student pressed me on why we weren’t acknowledging that not all women bleed.  What he really wanted was to make sure that in our category of women, we were including transwomen.

Honestly, that was not a conversation I expected to have so early on.  It is hard conversation in the context of feminism and religion as most recieved religious traditions, as well as some versions of feminist spirituality, often rely on essentialist definitions of gender.  Many religious ideals are so entrenched in gendered language, religious feminists usually have to break down some of those barriers before conversations which include all women and a variety of genders can even enter the conversation.  That was very true for Martin writing in early 1993.

I remember responding that, yes, gender is complicated.  Most women are biological females who have uteri and bleed regularly.  Yet, there are people born anatomically female who for numerous reasons, biological, hormonal or physical, have never bled.  Prepubescent and post-menopausal biological females do not bleed.  At the same time, not all of these biological females identify as women.  Some are transmen, some are non-binary, and some are gender fluid and so on. There are also people who identify as women who never had uteri from which to bleed and people who do not identify with either gender or beyond gender and yet have uteri and bleed.  Intersex people have with a wide range of anatomical possibilities and may or may not bleed regardless of their gender identity.

After my hysterectomy, I would add that there are people like me, not old enough for menopause, yet who for one reason or another, once had uteri and bled, but no longer do. Having a uterus and menstruation are not markers of being a woman, even if most women-identifying people and biological females do bleed at least for some time in their lives. Having a period is a marker of the biological possibility of some humans to get pregnant.  Before my hysterectomy, I could get pregnant, now I can’t.

However complicated we know gender to be, most religions aren’t there yet.  Some, like Judaism, have throughout history recognised some level of biological diversity, mostly to account for intersex individuals.  This makes starting the conversation easier. However, many religious traditions haven’t accounted for such things.  They were founded in a different time and place, which instituted clear divisions between men and women.  On top of that, they often assume their tenants to be universal, eternal values.  And, they’ve put a lot of time and energy into defining very specific gendered roles and defended them earnestly.  It is going to take some work to break them of their habits.  Unfortunately this means that we start with the recognizable categories that a given religious tradition understands, like essentialist understandings of men and women, even if it boils our blood to do so.

Thankfully, some twenty seven years after Martin’s work, many discussions about religion and gender do not have to start with such essentialistic ideas about womanhood.  In progressive Jewish circles, this is especially true.  For example, Rabbi David J. Meyer’s article entitled, “What the Torah Teaches Us about Gender Fluidity and Transgender Justice,” is just one way in which the conversation has changed.  Alana Suskin’s “Bet you didn’t know… what the Talmud says about Gender Ambiguity,” is another.  Finally, there is the National Council of Jewish Women’s amazing guide, “Gender Diversity and Judaism.”

Unfortunately this is not true for all streams of Jewish thought.  At the intersection of religion and feminism, we still have to work at dismantling essentialist ideas of gender.  After all, not all women bleed.  Post-hysterectomy, I am part of that category too.

Ivy Helman, Ph.D.: A feminist scholar and faculty member at Charles University in Prague, Czech Republic where she teaches a variety of Jewish Studies, Feminist and Ecofeminist courses.

Like Loading...
‹ Navigating Meaning in Unchartered Ways by Natalie Weaver
Judaism or Christianity: Which Tradition Is More Open to Feminist Change? by Carol P. Christ ›