Home › Archaeology › THE LABRYS: A RIVER OF BIRDS IN MIGRATION by Carol P. Christ

THE LABRYS: A RIVER OF BIRDS IN MIGRATION by Carol P. Christ

“There’s a river of birds in migration, a nation of women with wings.” —Goddess chant, Libana

On the Goddess Pilgrimage to Crete, I explain that many of the names given to “Minoan” (c. 3000-1450 BCE) Cretan artifacts and architecture are products of patriarchal and Eurocentric imaginations, and as such, are misleading.  For example the name “Minoan” was given to the culture of Bronze Age Crete in honor of “King Minos,” who was said to have ruled in Crete a few generations before the Trojan War–several hundred years after the end of the culture to which his name was attached.  In fact, despite his eagerness to find evidence that King Minos ruled at Knossos, the excavator Sir Arthur Evans finally had to concede that the best he could do was to produce a fresco of a “Prince of the Lilies” which he identifed as the image of the male ruler of the culture he called “Minoan.”  Evans’ Prince had white skin, a fact that Evans conveniently overlooked–because according to his own interpretation of “Minoan” iconography, white skin would mark the figure as female.  Mark Cameron, who reviewed Evans’ reconstruction of the fresco, suggested that the Prince is more likely to be a young woman who is perhaps leading a bull to take part in the bull-leaping games.  He also stated that the “crown” belonged to another fresco altogether.

Evans’ failure to find evidence of a King or for that matter a Queen at the complex of buildings he called “The Palace of Knossos” calls into question his idea that these structures were palaces.  Nanno Marinatos argued that the “palace” was instead a ritual center for the surrounding village, as well as a community gathering place, a place for storing grain, wine, and oil in a sacred way, and a place where ritual objects were fashioned of clay, bronze, stone, and gold.  Following her lead, I renamed the “Palaces” “Sacred Centers.” In this blog I will experiment with renaming the “Minoan” culture “Ariadnian,” after the pre-Greek name Ariadne, which may be one of the names of the Goddess of Bronze Age Crete.

One of the most pervasive–and many would say–most enigmatic symbols of the Ariadnian culture is the labrys.

Labrys is a pre-Greek word which is usually translated as “double axe.”  Labrys is the root of the word labyrinth, the home of the labrys.  In Ariadnian Crete, the labrys is  sometimes a pair of triangles joined at their apexes.  This symbol is also found in Anatolia in the Neolithic era, for example, at Catal Huyuk.  This image suggests the doubling of the sacred, life-giving, female public triangle. The labrys is carved on stones used in buildings in this way. However, in Crete the labrys is more frequently painted or cast in bronze or gold in a rounded shape that is only vaguely reminiscent of doubled triangles.  The labrys comes to symbolize more than the female triangle doubled.

Though books still say that the “double axe” was used to sacrifice the bull, there is in fact no evidence for that.  Nor is the labrys ever pictured as a “battle axe,” a weapon of war.  The labrys is never shown in Ariadnian Crete in the hands of a man or a boy–but only in the hands of women or Goddesses.

Large bronze labryses attached to wooden poles mark sacred spaces and are analogous to crosses that signify Christian sacred spaces.  Small gold labryses were found wedged into stalagmites in the ritual cave of Mt. Dicte.  On pottery the labrys “pole” sometimes becomes the head and body of what seemed to Marija Gimbutas to be a butterfly, and to others a nacent “angel.”

In many visits to the museums and archaeological sites of Crete, I have considered many interpretations, but none unlocked the “mystery” of the labrys for me.  As labrys is a difficult and unfamiliar word for many, I have often referred to the labrys as a “double axe.”

While thinking about a recent pilgrimage, I recalled that I was corrected by one of the other pilgrims when I used the archaeologist’s term “lustral bath” to refer to a small ritual room–after I had already explained that this and similar places could not be “baths” because they lacked drains.  For some reason my mind jumped to the mystery of the labrys.  I wondered if my frequent reference to it as a “double axe” also needed to be corrected. 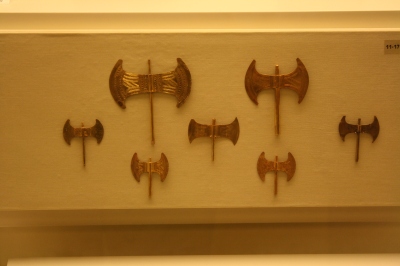 After an internet search that brought up several images of the labrys, words formed in my mind: “If you are not a double axe, then what are you?”  The answer came immediately:  “We are wings.”  “Of course.” I responded, “you are wings.” Why did it take me so long to recognize that?

According to Marija Gimbutas, the bird is one of the most common images of the Goddess of Old Europe–and Ariadnian Crete was the last flowering of Old Europe.  Birds are universally admired for their powers of flight.  Their appearance during a ritual in Ariadnian Crete  was understood as the hierophany of the Goddess–think of the Holy Spirit descending as a dove.  The days marked by the return of birds in spring and their departure at the end of the summer were correlated with planting and harvesting.  A bird egg is a symbol of fertility, a bird nest is a symbol of home, and the care and concern of birds for their young is a model for parenting.  To paraphrase Black Elk, because it means all this and so much more, the bird is sacred.

I suspect that my repetition of the words double axe had closed my mind to “seeing”  the labrys as wings.  But as soon as the labryses spoke to me, a cloud of mystification lifted from my mind.  Since then, I have felt an unexpected lightness of being.  I find myself singing, “There’s a river of birds in migration, a nation of women with wings,” while I go about my days.  Extending my arms to “fly,” I realize that the rounded shape of the labrys is the shape a human being makes when her arms imitate wings.  This too is intuitively satisfying.

I don’t know about you, but I will never see the labrys as a “double axe” again.  From now on I will repeat the message I received, “we are wings”:  double wings, wings of flight, wings of migration, wings of mothering and fathering birds bringing food to their young, wings of the Goddess inspiring, embracing, and protecting all life.  Blessed be!

Carol P. Christ has just returned from a life-transforming Goddess Pilgrimage to Crete which she led through Ariadne Institute.  The culture of ancient Crete, the last flowering of Old Europe, is one of the wellsprings of her spiritual vision, and there she participates in rituals that invoke Goddess and celebrate the connection of all beings in the web of  life.  It is not too late to join the fall pilgrimage, nor too early to sign up for spring 2014.  Carol spoke on a WATER Teleconference recently.  Her books include She Who Changes and Rebirth of the Goddess and the widely-used anthologies Womanspirit Rising and Weaving the Visions.

Like Loading...
‹ Tug-of-Warring over the Female Body (Part 2 of 2) by Jameelah X. Medina
Be-pistemology by Marcia Mount Shoop ›