Home › Activism › On Not Being A Big Hollywood Film Director, and Other Life Choices by Marie Cartier

On Not Being A Big Hollywood Film Director, and Other Life Choices by Marie Cartier 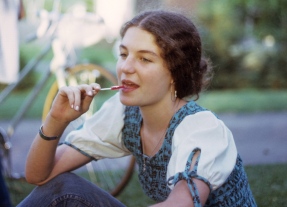 As you read this, dear FAR community, it will be my 59th birthday. I was born February 27, 1956. I have one year to go before I turn 60. For this last year I desperately wanted to dye my hair blue, purple and green and let the roots go gray.

However in a long conversation with my hair stylist she helped me realize that I have spent so many years dying my hair various shades of brown, dark brown and burgundy that if I bleach the hair out to white (so that I can then go blue, purple and green) the hair will fry and fall out—ah, Ok. I will

live with my brown, black and burgundy hair until I am ready to go completely gray and watch it grow out (my hairdresser tells me it will take three years). Or I will decide to live with the choice I made to dye my hair since I was 35 or so and let it be and keep dying it – and have that be the choice I made.

I bring this up to illustrate how at some point we have to make peace with our choices. Aging is life—if we are lucky. And I have written about this before in another “birthday post” last year two weeks after my mother passed. So another year has slipped through the hour glass and now my father is gone.

Whatever eschatological formations or study of “end things” we hold dear or loose – aging happens if we are lucky. As we age, we see seasons, pets, people, cities we have lived in and will not again, places we visited and will not visit again, and ideas and things we let go of as we lighten our load. I believe firmly in George Eliot’s saying that “It is never too late to be what you might have been.” But it is also true that as our short time on the roller coaster whirls through the kaleidoscope of living—at some point we have to decide what are the things we still wish to do. 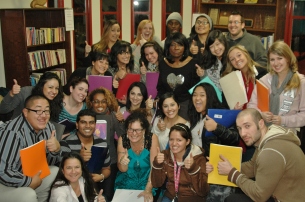 And so with that I give myself a gift, and you as well (I hope). Below is a poem I found as I went through files that has never been published, titled, On Not Being A Big Hollywood Film Director. I wrote this 7 years ago (a magic number and my favorite number) and it seems appropriate to publish it now—here in the context of feminists and religion. What are we searching for? What are we willing to let go of? How do we make peace with our self and the dreams of the selves we are at all the ages we are/will be?

The reason I moved to Los Angeles was to be “a big Hollywood film director.” I ended up writing poetry, doing “underground” experimental theater, getting a Ph.D. in religion, and interviewing pre-Stonewall gay women to write a book about gay bars as sacred space. I was the first artist the state of California funded to do workshops with incest survivors, doing my own healing around abuse, creating the Dandelion Warrior Project getting a black belt, marrying a woman, teaching Gender and Women Studies, Queer Studies…and yes, also teaching screenwriting. As I look towards my “end time” and formulate my eschatology, I lean towards the phenomena of experience that has no name – the idea of the holy, to quote Rudolf Otto. I speak to that younger self—with love, and I invite her to love also the choices I have made.

On Not Being a Big Hollywood Film Director

I moved to Los Angeles
to go to film school, and learn how to
Write Movies. A good friend of mine
in film school said the best part of
being in the theater (as opposed to film) was sitting
in the back of the theater
all in black smoking a cigarette. She had just
magic marker-ed out all of the yellow letters
on the navy sweatshirt that spelled out “UCLA.”

I was trying to figure out writing
and living then, too. You see,
it was always about poetry.
That awkward kid with the long hair,
smoking cigarettes in the well of the school yard
and saying weird things that stopped conversation,
not necessarily in a good way.

I was always in love with her, the one
in the long flowered dress crocheting
snowflakes from a small bag of yarn
she kept in a Victorian purse around her waist.

In there she also had Kool cigarettes
for the peace sign filter, matches,
half a joint and Bonne Belle lip gloss.

As I got older it was the
young woman in the pottery class
who quit because the teacher made her
break her first bowl because it
wasn’t perfect and she left in tears –
who wanted perfection anyway?
That’s not what she signed up for.

The one in the “Silence equals death”
T-shirt, leggings and sequined high tops
at the coffee shop, crying into her cell
phone while writing furiously on a napkin and
having her pen go dry and asking the waitress if
she could borrow hers. And she sat there
writing, writing on napkins
for two hours and walked away with two final copies
of something on four napkins folded carefully into
a paper back in her weird plaid backpack.

That person. I wanted to fall in love with the
person who was good for me.  The woman with the
cashmere sweater
set over slacks and low heels
who spoke a few languages and traveled to study
ancient culture, or the biologist or the
film director with the equipment she knew
how to use.

I tried. I walked out on the director at
a camera class and wrote a poem by the
vending machine missing most of the lecture.

When I said “Action!”
the thing that came to life was the
pages to my journal. They would lift
into the air like Harry Potter’s
white owl and settle in front
of me – screaming for the letter
to be released, my “letter to the world,
that never wrote to me.” Remembering

Emily Dickinson I remember that she said also “I’m Nobody.”
She never made a living,
either. But neither did Van Gogh
or most of the people I went to film school with.
We are all that thing now,
Mid Life, and I read crisis is normal at
This Stage….So, I turn to poetry.
I approach the long haired girl with the
spray glitter in her hair and eyelashes
curled with blue mascara.
I lean against the wall she slouches against,
writing on her hand with a pen.
I don’t look at her but squint towards the sky
as if I didn’t care, and I ask,
casually, and still my beating…
“Got a light?”

Like Loading...
‹ Abuse Does Not Have “Fifty Shades of Grey” by Michele Stopera Freyhauf
Connection by Deanne Quarrie ›