Journeying into the worlds of young adult fantasy enters another dimension with the second series I will be looking at: Laini Taylor’s series Daughter of Smoke and Bone.  The series premiered in 2011 and contains three books. Both Daughter of Smoke and Bone and the second book, Days of Blood and Starlight (2012) were on the lists of “Best Teen Book” for Amazon and the New York Times. The first book has already been sent into movie production. This series explores ideas surrounding good versus evil, tolerance, fear, grief, violence, and redemption. 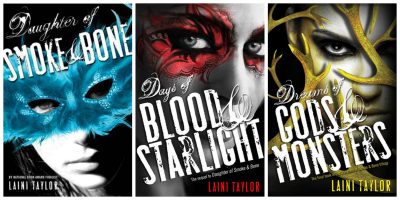 Daughter of Smoke and Bone is a series set within our modern world but also includes a fictional sub-world/dimension called Eretz. In Eretz, there lives creatures, called Chimera. These  creatures have human and animal features in multiple combinations. This world also has a species known as the Seraphim. They hold features which mimic that of human understanding of angels. We start off in the human world following a 17-year-old art student named Karou who lives in Prague. She grew up with Chimera, who live in-between the worlds/dimensions. Her adopted father, guardian, and employer named Brimstone deals in magic which centers around wishes – the power of which is gleaned from bones. Brimstone also has been taught the art of resurrection. He can bring back souls and place them into new bodies. The bodies are determined by the type of bones. This provides an interesting play on body and identity – in the wrong hands, resurrection is used to create bodies built for war. And it can be used to keep souls alive permanently.

It is on the cusp of a war between the Chimera and Seraphim which Karou unknowingly plays a large part of. Karou meets a mysterious man named Akiva, who turns out to be a Seraph. They are immediately drawn to one another and ultimately fall in love despite the heightened battle between the Seraphim and Chimera. It is because of Karou and Akiva that the human world is introduced to angels. We also found out the true story behind Karou, how she ended up in Brimstone’s care, and why she is so drawn to Akiva (but I won’t spoil this for you!)

The world of Eretz and our world are connected by portals. Many of the portals had been sealed shut but a few remain open. It is through these remaining portals that angels and the chimera start to enter. Taylor plays on society’s understanding of good versus evil and West versus East. The Seraphim are deliberate when they come to the human world. They display power and glory in their appearance, speak Latin, and go directly to Rome. A Chimeran group had started to use a portal found in Marrakesh and with the help of Karou (who has taken up Brimstone’s job as a resurrectionist), has started to build an army to take on the Seraphim, aka the Dominion. The Dominion uses the established religious landscape of good vs. evil and tells the human world that the Chimera are evil, which is why they carry animal form and are found in the deserts of the East. The leader of the Dominion, a cruel sadist, asks the Vatican for modern weapons to defeat the evil forces of Chimera. But through the writing of Taylor, the reader sees that both sides carries equally evil and good members – that appearance is not all that it seems.

This becomes important when both Akiva and Karou decide to change the worlds; to change how things have been done for all of time, to bridge the species. One of the ways this is discussed is through the understanding of hope. “Hope is true. Hope makes its own magic.”[1] Brimstone believes that Karou and later her ties with Akiva can bring about change, can turn the worlds upside for the better. This series plays with the ideas of love transcending time, transcending race, and transcending hate. It plays with the idea of how power can corrupt, and the pureness and capacity of hope; “Hope can be a powerful force. Maybe there’s no actual magic in it, but when you know what you hope for most and hold it like a light within you, you can make things happen, almost like magic.”[2] It is also discovered that the name of Karou means hope.

Taylor’s series can easily be a metaphor for inter-religious, interracial marriage, tolerance, acceptance, forgiveness, and the courage to change the world. Daughter of Smoke and Bone grapples with forgiveness, reconciliation, compassion, and freedom.  Despite the darkness of the world, one must always be true to oneself and one’s life. “Never repent of your own goodness, child. To stay true in the face of evil is a feat of strength.”[3] The series illustrates the capacity of even a select few creating a ripple to which even the largest forces and structures are affected by. The series and the journey of Karou helps to provide a way to explore how one goes about living in a world filled with violence and intolerance but keeping intake one’s integrity, one’s spirit, and more importantly one’s hope. And in this day, on the page and off it, Hope is a powerful thing. 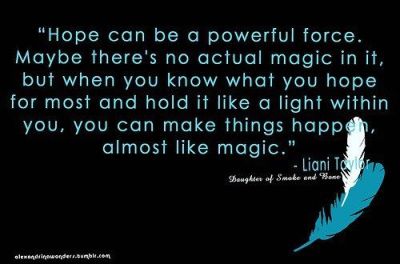 Anjeanette LeBoeuf is a Ph.D Candidate in Women Studies in Religion at Claremont Graduate University. Her focuses are divided between South Asian religions and religion and popular culture. She has become focused on exploring the representations of women in all forms of popular culture and how religion plays into them. She is an avid supporter of both soccer and hockey. She is also a television and movie buff which probably takes way too much of her time, but she enjoys every minute of it. Anjeanette has had a love affair with books from a very young age and always finds time in her demanding academic career to crack open a new book.

Like Loading...
‹ The Halcyon Days by Deanne Quarrie
FAR Press Publishes A Serpentine Path: Mysteries of the Goddess by Carol P. Christ ›