Home › Dance › The Tree of Life and the Forest of Friendship: Circle Dance to Restore our Hope by Laura Shannon

The Tree of Life and the Forest of Friendship: Circle Dance to Restore our Hope by Laura Shannon

Tree and Goddess motifs on the ‘Wall of the Foremothers’ (Ahninnenwand), Bodensee, Germany, 4th Millenium BCE

Yes, times are tough. But a better understanding of our interconnectedness can help us move beyond the cynicism, frustration, and despair we may be feeling in the modern world. A closer look at trees, and at women’s traditional circle dances, can offer valuable lessons about friendship, community, and the interconnectedness of all life.

The sacred Tree is found in virtually all cultures, often identified with the life-giving figure of the Goddess. Both motifs appear abundantly in archaeological finds dating back to the early Neolithic era. Dance archaeologist Yosef Garfinkel affirms that humans have been dancing in circles since then and probably for far longer.

The Tree of Life is central to the women’s traditional circle dances of the Balkans and the Near East, which I have been researching for over thirty years.  The pattern of the Tree of Life is encoded in the steps of dances, many dance songs refer to women as sacred or magical trees, people often dance around or under sacred trees, and Tree and Goddess motifs are featured on the textiles worn while dancing.  Furthermore, each dancer resembles a tree, with her ‘trunk’ upright and centred, arms symmetrically extended like branches, and hands joined so that we support each other in the circle.

As we dance, we learn to integrate and internalize the image of the sacred Tree. This helps us develop valuable skills: quiet strength, inner calm, a deep-rooted sense of being at home on the earth and in the body, and the upright and majestic posture of the dancer. Through practice in the dance, we learn ultimately to embody these qualities in daily life.

As well as individual dignity and grace, the dances teach us connection. We do not dance alone; we are part of a circle. Traditionally, dancers also dressed alike, in a unity of costume which emphasised commonality rather than difference. In this way the women’s ritual dances create a culture of partnership, rather than domination, to use Riane Eisler’s terminology. This is a culture of mutual support, based on linking instead of ranking. It is a culture of love and loyalty, generosity and equality, friendship and peace: ‘power with’, not ‘power over’. 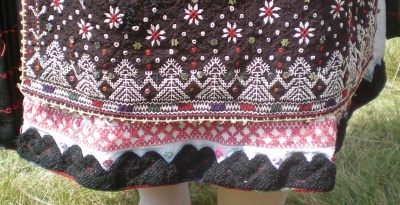 These are the values of the Goddess, as articulated by Carol Christ and others. They predate, and provide an alternative to, the modern worldview based on hierarchy and inequality. Mainstream Western society rewards individuals who fill their own pockets regardless of any harm it does to others, to the environment, or to society as a whole. But we cannot continue indefinitely down this path of exploitation and destruction driven by individual greed. Our planet will not be able to withstand it, and future generations will not be able to heal it.

So we see the importance of choosing an alternative way of being with each another and in our world. This alternative does not have to be newly imagined or invented. It already exists, in a worldview rooted in the oldest civilizations, including the earliest indigenous cultures of Neolithic Old Europe, and surviving in the last practices of traditional circle dance.

To better understand this ancient value system, and the principles of mutual support and friendship at its heart, let us turn with new eyes to the wisdom of the trees.

Western rationalist science perpetuates the misconception that individual trees in a forest are in constant competition for scarce resources of space, light, water, and food. This idea mirrors the outmoded Darwinian template of human society – that ‘survival of the fittest’ means that ‘only a few can win and all the rest must lose’. The reality of the forest, as more open-minded scientists are now able to demonstrate, is vastly different – and this shows that we can construct our society differently too.

Trees in groves and forests live longer than solitary trees. This is partly because forest trees help each other. They are friendly, sharing nutrients and information. Mother trees recognize, protect, feed, and communicate with their own kin and offspring. These descendants, in turn, may nourish the stump of a fallen mother tree by sending it nutrients, keeping it alive for hundreds of years.

Unrelated trees – even trees of different species – also share resources and support. Each individual tree is important, since if one tree falls in the forest, the gap in the canopy can disrupt the balanced microclimate and endanger all inhabitants.  Although trees normally photosynthesise at different rates, woodland trees balance the needs and abilities of stronger and weaker trees in order to maintain a consistent rate of photosynthesis throughout the forest. Forest researcher Suzanne Simard has shown that birches and firs take turns to help each other grow, sharing nutrients through the network of microscopic fungi that connect their roots. Yes, trees, like women, lend each other sugar when someone in their neighbourhood is running short.

Forester and ecologist Peter Wohlleben says, ‘a happy forest is a healthy forest’. Like us, I think trees are happiest when they are permitted to live in a culture of peace. One might question whether trees really experience their mutual support as ‘friendship’, but the point is that trees do not help only their ‘friends’. A healthy forest requires diversity, therefore forest trees live by an ethic of mutual support regardless of differences. This would be an excellent example for human beings to follow, as a way to create a healthy human community.

The forest thus demonstrates the principle of interconnectedness, or ‘interbeing’, in the word coined by Vietnamese Buddhist monk Thich Nhat Hanh. Economist and philosopher Charles Eisenstein shows how realizing the truth of our interbeing can provide ‘an antidote to the cynicism, frustration, and paralysis so many people feel in the modern world’: through understanding our essential interconnectedness, we can move beyond the destructive worldview of separation and competition which has led to our present planetary crisis, and finally create ‘the more beautiful world our hearts know is possible’.

Friendship, shared support and mutual respect are the keys. We can learn it from the dance, and we can learn it from the trees, and we can teach it to the world and to future generations. We who dance regularly know that every time we join our hands and hearts in a circle, we are already practicing this mutually supportive way of being. We are already creating that more beautiful world.

has been researching and teaching traditional women’s ritual dances since 1987. She is considered one of the ‘grandmothers’ of the worldwide Sacred / Circle Dance movement and gives workshops regularly in over twenty countries worldwide. Laura holds an honours degree in Intercultural Studies (1986) and a diploma in Dance Movement Therapy (1990).  She has also dedicated much time to primary research in Balkan and Greek villages, learning songs, dances, rituals and textile patterns which have been passed down for many generations, and which embody an age-old worldview of sustainability, community, and reverence for the earth. Laura’s essay ‘Women’s Ritual Dances: An Ancient Source of Healing in Our Times’,  was published in Dancing on the Earth. Laura lives partly in Greece and partly in the Findhorn ecological community in Scotland

Like Loading...
‹ Making Space for the Joy and the Grief by Christy Croft
Do We Need Wonder Woman Today? by Barbara Ardinger ›