Home › Buddhism › In the footprints of Machig Lapdron by Mary Sharratt

I’ve just returned from an illuminating trip to Bhutan, high in the Himalayas. Bhutan is a Buddhist kingdom and the world’s youngest democracy.

On our last full day in this enchanting land, my husband and I drove with our guide over the nearly 4000 meter pass of Chelela and into the Haa Valley which doesn’t see that many tourists. Our goal was the Hermitage of Juneydrak, where Machig Lapdron (1055-1145 CE), the famous female Tantric mystic, master, and lineage founder, once meditated.

For more information on Machig Lapdron and about women in Tibetan Buddhism, please read Lama Tsultrim Allione’s classic book, Women of Wisdom. An American teacher and author, Tsultrim Allione has been recognized as a modern incarnation of Machig Lapdron and she offers teachings in Machig Lapdron’s mother lineage. A magical synchronicity occurred when I discovered that Lama Tsultrim and a group of her students from her retreat center, Tara Mandala, were in Bhutan during the same time as I was and even staying in two of the same hotels! When I breathlessly introduced myself to Lama Tsultrim in our hotel dining room, she graciously took my hand and said it was no accident that our paths crossed in Bhutan of all places.

I don’t know whether Lama Tsultrim and her students visited the Juneydrak Hermitage. When I visited, my husband and I and our guide were the only visitors there. We hiked up from the village of Haa, past fields and pastures, past a ruined monastery wall, and then through a beautiful rhododendron and pine forest to the hermitage gates. The site can only be reached on foot.

Juneydrak is a site cloaked in mystery. Though our guide once attended college in Haa, he had never before been to the hermitage, nor did he or many of the valley’s residents know much about the site or its history. There was once a monastery at Juneydrak, but it burned down. In 2016, the eldest of the Bhutanese Queen Mothers (the late king had four wives) built a new meditation hall here.

At the hermitage gates, we met the caretakers, a married couple who spend their “retirement” in five-year care-taking stints at various remote monasteries and spiritual sites where they perform their own committed religious practice, as well as looking after the site. The male half of the hermit couple told us it is his goal to do 100,000 prostrations at each site he takes care of. 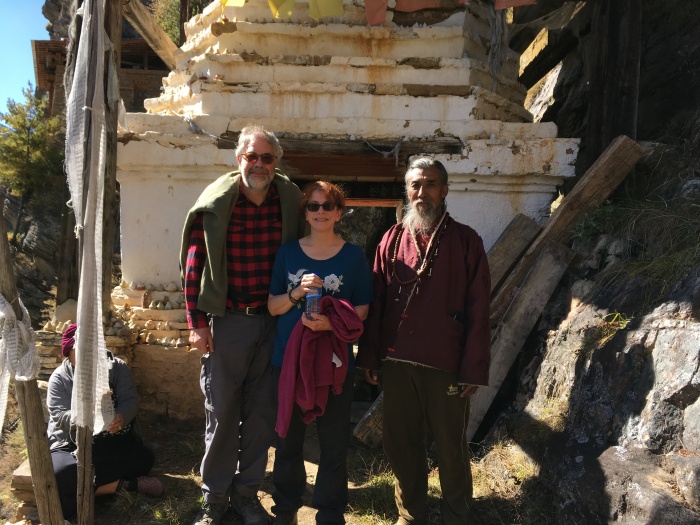 In front of the hermitage gates with my husband and the two hermit caretakers. The woman, seated with her mala beads, and her husband, standing.

After entering the hermitage gates, to gain access to the meditation hall, one must scale a sheer cliff face by way of rickety and weathered wooden ladders and by hauling oneself up nearly vertical stone steps with the help of a rope. The male caretaker literally took me by the hand and pulled me up so I wouldn’t fall. In the background, I could hear our guide praying aloud for our safety.

The hermitage: on the right you see the gate house. Up the sheer cliff face is the meditation hall.

Once we reached the meditation hall itself, we saw the main shrine, dedicated to Guru Rinpoche who first brought Buddhism to Tibet. The large male figure was flanked by two much smaller ancillary figures, his consorts. One of these consorts, Yeshe Tsoygal, was the first enlightened Tibetan and also believed to be an earlier incarnation of Machig Lapdron. I must admit I was disappointed not to see an image of Machig Lapdron herself.

Below Guru Rinpoche and his consorts was a silk-wrapped statue of the fierce, untamed red Yogini Goddess, Dorje Phakmo or Vajra Yogini, who drinks her menstrual blood from a skull cup. When Yeshe Tsoygal was having a near death experience, Vajra Yogini appeared to her and nourished the ailing woman with her own menstrual blood, in a direct female to female blood mystery transmission which restored Yeshe Tsoygal completely until she felt as strong and empowered as a snow lion. You can read Vicki Noble’s profound meditations on Yeshe Tsoygal’s encounter with Vajra Yogini here.

Machig Lapdron, Yeshe Tsoygal, and Vajra Yogini herself are all recognized as Dakinis.  Dakini is a Sanskrit word that literally translates as “sky dancer.” Dakinis can either be human women or deities–they are the female embodiment of enlightened wisdom.

I’m afraid I have no pictures of the inside of the shrine as photography inside temples and sacred sites is strictly forbidden in Bhutan.

But the holiest part of the shrine–what we came here for–was in the far corner. There, on the cliff face which forms the inner wall of the meditation hall, was a slender female footprint, believed to be the footprint of Machig Lapdron herself.

After meditating, my husband and I lit butter lamps. Each time you make such an offering, you may say a prayer or make a wish. In Buddhism, however, your prayers and wishes shouldn’t just be directed to yourself but toward the welfare and liberation of all beings. So I offered Vicki Noble’s beautiful prayer.

“OM MANI PADME HUM and Homage to the Jewel in the Lotus. May all beings be free. May all beings recognize the dakini. May all beings know happiness and an end to suffering. May all women know ourselves to be Vajrayogini and our bodies to be her sacred temple. May we be strong as snow-lions!”

Vicki Noble, from “The Auspiciousness of Being a Woman“

Mary Sharratt is on a mission to write women back into history. Her new novel, Ecstasy, drawn from the dramatic life of composer, muse, and life artist, Alma Schindler Mahler, will be published in April and is now available on preorder. She is also the author of Illuminations: A Novel of Hildegard von Bingen, inspired by one of the most creative women of all time. Visit her website.

Like Loading...
‹ Jewish Folklore and Women’s Clothing: When Things are the Text by Jill Hammer
Radical Inclusivity – Just Go ‘Inside’ – by Karen Leslie Hernandez ›