Home › Violence › Our Sacred Spaces are Burning By Anjeanette LeBoeuf

Our Sacred Spaces are Burning By Anjeanette LeBoeuf

Event Update: This post was largely written before the Saturday shooting at the Chabad Synagogue in Poway, California. I have added a few sentences at the end of this post in light of this new sacred space violence.

When I started to write this FAR post, it was going to be focused on the three historic Black Churches in Louisiana that had burned to the ground due to arson. These churches and communities remained largely unknown with very little coverage. The post then developed to include the accidental burning of the infamous historic Notre Dame Cathedral in Paris, France and the immediate global response. The Notre Dame response was immediate and massive; over 1 Billion dollars was promised for the future rebuild.  Yet for the most part the three Black churches remained in obscurity until social media critiques posted about how the global wealthy elite were so willing to drop money for building that already was in the stages of refurbishment. This post then shifted once again with the Easter Sunday bombings in Sri Lanka.

The devastating bombings that directly targeted Christians and Tourists has rocked the world. The current numbers are 350 dead and might continue to rise in the next few days. ISIS has claimed responsibility contrary to the rushed proclamation of Sri Lankan’s President Maithripala Sirisena that it was the small terrorist cell NTJ. The president also incorrectly stated that these bombings were a retaliation to the Mosque attacks in New Zealand last month. So where does that leave us with answers on why Sri Lanka? Why Easter Sunday? 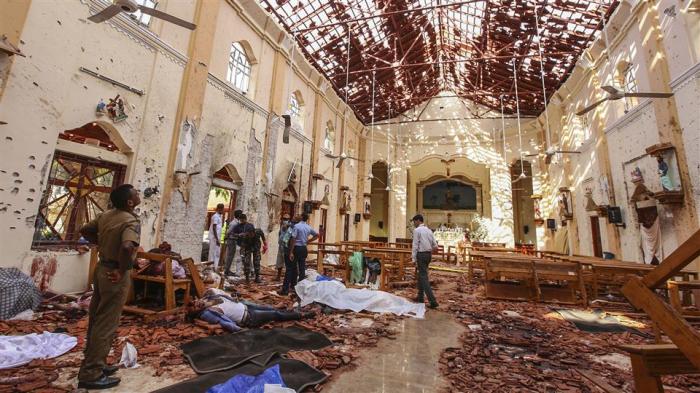 Easter Sunday Attacks are not new nor the only incidence within the last month. After the Sri Lanka bombings, Spanish police released a report that they foiled an attack which was planned for Easter Sunday in Seville. An armed woman went to a San Diego Church on Sunday, mere hours after news broke about the Sri Lanka bombings. A man tried to enter St. Patrick’s Cathedral in New York doused in gasoline. And the three historic Black Churches in Louisiana; St. Mary Baptist Church in Port Barre on March 26, Greater Union Baptist Church in Opelousas on April 2 and Mount Pleasant Baptist Church in Opelousas on April 4. And that was just within the last month.

In 2017, Egypt saw bombings that killed 45 Egyptian Coptic Christians on Easter. 2016 saw a suicide bombing on Easter Sunday in Lahore, Pakistan that killed 75 Muslims and Christians and injured 340. 2012 had a car bombing during Easter in Nigeria. I could continue with the amount of violence not just on Easter week but during other Religious holidays and festivals. Bombings, attacks, attempted violence.

While for many, Easter bombings seem to be a 21st Century product but the reality is that attacks during religious services have been methods to inflict pain and suffering. Part of the push for Irish Independence from the British, which is called the Easter Rising, took place during Easter Week in 1916. I could list many more instances of violence and religious holidays. The Sri Lanka bombings come while the globe is still dealing with the aftermath of the Christchurch Mosque shootings and the Synagogue shootings in Pittsburgh.

What is unique is the location of Sri Lanka. Both Muslim and Christian communities are minority populations in Sri Lanka. Muslims have a 3% advantage towards the Sri Lankan Christian communities. These continual attacks brought on by both sides are attempts to continue to sow contention and further split our allegiances. Stanly Johny writes in his article “Easter Sunday bombings: Why Sri Lanka?”

Their target is to spread terror anywhere in the world and trigger a cultural war between Islam and other faiths. This time it’s Sri Lanka, next time it could be any other country.

And sadly yes, more attacks will happen on religious holidays. And I am left pondering the connection with sacrality and violence. If violence is a way to which a person can achieve religious ‘brownie points’ or salvation, then it will always be a mainstay in our societies. It is in direct contention with concepts of peace, compassion, and love that most of the the globe’s religions hold onto.

We have been witnessed to the Crusades, the Spanish Inquisition, the horrors of the Shoah, the Armenian Genocide the terrors of Indian/Pakistan Partition, the unrest and violence in Palestine and Israel, September 11th, the Syrian Refugee Crisis, the Rohingya Genocide, and the list, sadly, is extremely extensive. We are also the remedy. We can draw a new sacred line, one that does not have a connection between sacrality and violence.

Patheos, a website community of interfaith dialogue, spirituality discourse, and current news posted an article about the Sri Lanka Easter Bombings that I found extremely poignant.

As more information unfolds about these attacks, if we are going to address terror or peace, then all religions are on the table. It is neither Islamophobic, anti-Christian, nor anti-Buddhist to recognize when any segment of a religious institution acts as a source of oppression and terror.

We can no longer use these labels, personal biases, and politics to keep up us from dealing the realities impacting billions of lives.

In other words, we must face a problem to effectively remedy it.

No religious institution represents the sole source of global peace or violence. Because institutions consist of individuals, we have the power to join others in promoting inclusion of diverse beliefs in our world.

One thing is certain that I cannot say enough: The hate must stop.

If we don’t make a more collective push to eradicate hatred and violence, then more churches, temples, synagogues, and mosques will continue to burn. Our sacred spaces will be continual marked by sacred violence.

6 months to the day after 11 people were gunned down while attended services at the Tree of Life synagogue in Pittsburgh, PA, and merely a week after the Sri Lanka Easter bombings, a 19 year old man took a semi-automatic assault weapon and fired at the Chabad Congregation in Poway, CA that has killed one and left 3 others injured. This violence can no longer be regulated to our NEW NORMAL, this is not the legacy of our generations. I stand in solidarity with all communities that have experienced hate crimes, religious violence, bigotry, racism, and sexism. We need to demand changes from our politicians, change the conversations which breeds racism, sexism, and religious hatred.

Anjeanette LeBoeuf is a Visiting Assistant Professor at Whittier College. She is the Queer Advocate for the Western Region of the American Academy of Religion. Anjeanette also writes for the activist blog, Engaged Gaze. Her focuses are divided between South Asian religions and religion and popular culture. She has become focused on exploring the representations of women in all forms of popular culture and how religion plays into them. She is an avid supporter of both soccer and hockey. She is also a television and movie buff which probably takes way too much of her time, but she enjoys every minute of it. Anjeanette has had a love affair with books from a very young age and always finds time in her demanding academic career to crack open a new book.

Like Loading...
‹ Where the Dance Is . . . On Cultivating a Daily Practice by Joyce Zonana
My Body, My Self by Carol P. Christ ›