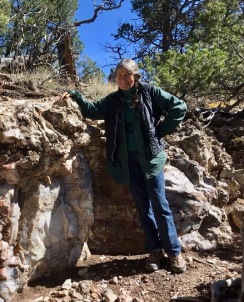 Scientist Susan Simard is a professor of forest ecology at the University in Vancouver, British Columbia, who has been studying the below-ground fungal networks that connect trees and facilitate underground inter-tree communication and interaction. Over a period of more than thirty years this field scientist and her students have learned how fungi networks move water, carbon and nutrients such as nitrogen between and among trees as well as across species. Her research has demonstrated that these complex, symbiotic networks in our forests — at the hub of which stand what she calls the “mother trees” — mimic our own neural and social networks. This groundbreaking work on symbiotic plant communication has far-reaching implications that include developing sustainable ways to ‘manage’ forests, and to improve tree and plant resistance to pathogens. Although much of Simard’s research occurs in forests, she has also studied the underground systems of grasslands, wetlands, tundra and alpine ecosystems.

Under our feet there is a whole world of biological pathways that connect trees and allow them to communicate and share resources and information. Other scientists who study these networks (like Dr. Merlin Sheldrake) agree with Susan who suggests that the forest behaves as though it’s a single cohesive organism.

When Simard first studied forestry she discovered that the extent of the clear-cutting was alarming, and the spraying and hacking away of aspens and birches to make way for the more commercially valuable planted pines and firs was frightening. By the time she was doing graduate work scientists had discovered in the laboratory that one pine seedling root could transmit carbon to another pine seedling root, and Susan hypothesized that this kind of exchange was exactly what occurred in real forests. Although many believed she was crazy Susan finally procured funding for conducting experiments deep in the forest. She grew 80 replicates of three species: paper birch, Douglas fir, and western red cedar believing the birch and the fir would be involved in two way communication underground while the cedar would not (cedar and maple have a symbiotic relationship of their own). To test her idea she injected two isotopes of carbon into the trees (in plastic bags) and within an hour the birch and fir exchanged carbon through their root systems.

Douglas fir and birch were conversing not only in the language of carbon but also exchanged nitrogen, phosphorus, water, defense signals, allele (gene) chemicals and hormones.

Scientists already had learned that an underground mutualistic symbiosis called the ‘myco-net was involved in this exchange. Mushrooms are the above ground reproductive evidence of the underground fungal threads that form  mycelium, and that mycelium infects and colonizes the roots of all the trees and plants. And where the fungal cells interact with the root cells, there’s a trade of carbon for nutrients, and that fungus gets those nutrients by growing through the soil and coating every soil particle. The web is so dense that there can be hundreds of kilometers of mycelium under a single footstep. Mycelium connects different individuals in the forest, not just individuals of the same species but also works between species, like birch and fir. Hub or “mother trees” (can be male or female) have the most powerful fungal highways. These trees nurture their young, the ones growing in the understory. In a single forest, a mother tree can be connected to hundreds of other trees each of which can send excess carbon etc. through the mycorrhizal network to understory seedlings, but especially to their own kin. Mother trees recognize and colonize their kin with bigger mycorrhizal networks. They send them more carbon below ground. They even reduce their own root competition to create space for their seedlings to grow. When mother trees are injured or dying, they also send carbon and defense signals to the next generation of seedlings helping the youngsters to resist future stresses.Through back and forth conversations, trees increase the survival rate of the whole community.

What makes the forest so resilient is that there are many hub or mother trees and many overlapping networks.

Unfortunately forests are also vulnerable, vulnerable not only to natural disturbances like bark beetles that preferentially attack big old trees but also to clear-cut logging. It is possible to remove one or two hub trees but not many of them; there is a tipping point after which the whole system collapses.

Trees may not have nervous systems but they can feel what is happening and can experience something analogous to pain. When a tree is cut it sends out electrical signals like wounded human tissue does.

Thirty years ago Simard hoped that her initial discoveries would change the way forestry was practiced. She was wrong. Forestry practices remain the same everywhere. In 2014, the World Resources Institute reported that Canada had the highest forest disturbance rate of any country worldwide, and that includes Brazil.

Worse, foresters continue to plant one or two species of trees for harvesting and weed out other trees like aspens and birches. These simplified forests lack complexity, and they’re really vulnerable to infections and insect infestation. As climate changes this is creating a perfect storm for extreme events to occur.

Simard explains her frustrations with Western science. “We don’t ask good questions about the interconnectedness of the forest, because we’re all trained as reductionists. We pick it apart and study one process at a time, even though we know these processes don’t happen in isolation. When I walk into a forest, I feel the spirit of the whole thing, everything working together in harmony, but we don’t have a way to map or measure that.” In her view her research and that of others is exposing the limitations of the Western scientific method itself.*

The one hope is that forests as complex systems have an enormous capacity to self-heal. Simard has demonstrated this capacity with recent experiments in which retention of hub trees, and careful patch cutting can lead to regeneration and recovering species diversity.

Because it is January, the time of year that bears give birth I want to close this essay with a bear – tree – carbon networking story. On the west coast in the Pacific temperate rainforests bears sit under trees and eat salmon leaving their carcasses behind. Researchers have discovered that the trees are absorbing salmon nitrogen and then sharing it with each other through the underground network. According to the Smithsonian this creates an interlinked system: fish forest fungi.

Someone forgot to mention the role that bears play in this story; the last sentence should read: bears, fish, forest, fungi.

Using reductionism and the scientific mechanistic paradigm as a baseline – scientists can think, intuit, even sense but they can’t be allowed to feel. Our bodies carry our feelings/emotions. When we refuse to credit emotional intelligence as a form of knowledge we cripple ourselves. Without using our capacity to feel we can’t help but distort our perceptions, skewing results – scientific or otherwise. We need all our faculties to problem solve efficiently…. Field scientists and ethologists like me probably have a better handle on this than most because we are looking at a more holistic picture.

It is not surprising that most of the criticism of Simard’s research comes from scientists who immediately throw out the accusation that the researcher is anthropomorphizing the moment feeling enters the picture.

Like Loading...
‹ Mis(sing)Understanding: Kobe, Pompeo, and a Paper Towel by Marcia Mount Shoop
The Kreismesser: Women and Magic Swords in Jewish Tradition by Jill Hammer ›