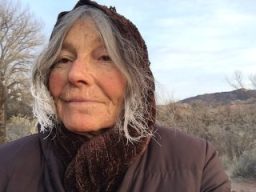 With the Winter Moon waxing on nights when stars are falling from the sky and the winter solstice passage, I am much aware of the healing and dwelling place that I inhabit that also characterizes these dark months of the year.

Unfortunately, even those who acknowledge our seasonal turnings rarely honor the dark as sacred. At the winter solstice the emphasis is still on light.

As Carol Christ writes so succinctly we manage to celebrate light at both solstices – at its apex and as its return.

This attitude reveals to me an inability to be present to dark, in both its generative and non – generative aspects. The original inhabitants of this country honored the dark months of the year very differently than westerners do. Their most important ceremonies occurred during the winter months. Both aspects of the dark were acknowledged and explicated through ceremony. What follows is a history of one of the Navajo healing ceremonies that occurs only during the winter months of the year.

The Navajo Night Chant is part of Native American religious tradition. The history of Native American cultures dates back thousands of years into prehistoric times. According to many scholars, the people who became Native Americans migrated from Asia across a land bridge that may have once connected the territories presently occupied by Alaska and Russia. The migrations, believed to have begun between 60,000 and 30,000 B. C. E., continued until approximately 4,000 B. C. E. This perspective, however, conflicts with traditional stories asserting that the Indigenous Americans have always lived in North America or that tribes moved up from the south.

The historical development of religious belief systems among Native Americans is not well known. Most of the information available was gathered by Europeans who arrived on the continent beginning in the sixteenth century. The data they recorded was fragmentary and oftentimes of questionable accuracy because the Europeans did not understand the native cultures they were trying to describe and Native Americans were reluctant to divulge details about themselves.

The nine-night ceremony known as the Night Chant or Nightway is believed to date from around 1000 B. C. E., when it was first performed by the Indians who lived in Canyon de Chelly (now eastern Arizona). It is considered to be the most sacred of all Navajo ceremonies and one of the most difficult and demanding to learn, involving the memorization of hundreds of songs, dozens of prayers, and several very complicated sand paintings. And yet the demand for Night Chants is so great that as many as fifty such ceremonies might be held during a single winter season, which lasts eighteen to twenty weeks.

The Navajo call themselves Diné, meaning “the people.” Their deities are known as the Holy People, and include Changing Woman, Talking God, the Sun, Earth, Moon, and Sky. Navajo religious practices emphasize healing rituals, in terms of curing diseases as well as healing relationships among all living things (if ever we needed to embrace this idea it is now).

Like the Navajo Mountain Chant, the Night Chant is designed both to cure people who are ill and to restore the order and balance of human and non-human relationships within the Navajo universe. The two are not separated. Led by a trained medicine man who has served a long apprenticeship and learned the intricate and detailed practices that are essential to the chant, the ceremony itself is capable of scaring off sickness and ugliness through the use of techniques, some that shock or arouse. Once disorder has been removed, order and balance are restored through song, prayer, sand painting, and other aspects of the ceremony. It’s important to note that this is a multi-valent process.

Before the chant itself takes place, young children undergo a tribal initiation. After being stripped of their clothing and then struck with a yucca whip, young boys are allowed to see the “gods” (i.e., the dancers who impersonate the gods) without their masks for the first time. Girls are not whipped but rather touched with ears of corn covered with sprays of spruce.

On the day of the chant, crowds gather expectantly outside the lodge where rehearsals have been taking place. The outdoor area in which the ceremony will be held is cleared of spectators, and many fires are lit to take the chill out of the night air. The dancers, who represent the gods, are led in by the medicine man and the maternal grandfather of the gods, along a path of meal that has been laid down for them to follow. The patient emerges from the lodge, sprinkles the gods with meal from his or her basket, and gives each one tobacco. The medicine man intones a long prayer for the patient, repeating each phrase four times. At no time is the patient’s illness separated from the disharmony that occurs around him in Nature. Afterwards the four gods dance, moving rhythmically back and forth, hooting at the end to denote the gods’ approval.