Home › Activism › Out of the Bars and Into the Streets and ….by Marie Cartier

Out of the Bars and Into the Streets and ….by Marie Cartier

I remember the election season of 1984. At the 1984 Democratic National Convention on July 18 in San Francisco, California, Jesse Jackson delivered the Keynote address, entitled “The Rainbow Coalition.” The speech called for Arab Americans, Native Americans, Asian Americans, youth, disabled veterans, small farmers, lesbians and gays to join with African Americans and Jewish Americans for a political purpose. My lover at the time woke me up very early in the morning to tell me that Jesse Jackson had said the words “lesbians and gays” as part of his speech at the Democratic Convention. I started to cry and called my mother and she cried, too. We both cried. It was a moment I will never forget…because in that moment I as a lesbian existed on national television and in the imagination and spoken word of the country’s political system where I live and pay taxes—in a way I never had before—I was spoken out loud.

Before November 6th of this year I said repeatedly, “No, he [President Obama] is not perfect. But he’s my president.” I can honestly say that working for the re-election of President Obama, and voting for him was the very first time—ever— that I was rooting for a presidential candidate who actually felt like my president. He repealed DOMA and he publicly supported gay marriage. He is the first sitting president to support gay marriage. That’s light years from a candidate running for the primary uttering the words “lesbians and gays.” And—those light years of travel are where we went and where we are now in these United States.

The ethics of social change demands a lot from those of us who do work for change. We must be open to coalition building, to repetitive conversations that change slightly as we are flexible, sometimes intractable and always –it’s complicated. Sometimes the arduous business of talking and working together feels like you are working under Malcom X’s mandate, “By any means necessary.” Anyone who has worked in the circular, frustrating, rewarding and challenging field of creating coalitions, finding consensus and collective building knows what I mean. But bit by bit—by any means necessary—society does change. And as the Reverend Martin Luther King, Jr. said, “The moral arc of the universe is long, but it bends towards justice.” And sometimes yes, it feels very, very long. 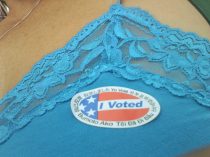 This November however we elected a president in the U.S. who supports gay marriage—it bears repeating. Gay marriage became legal in three states. Women’s presence in the Senate went up to 20%. In California money was budgeted for schools. Voter suppression was curtailed in many states—and the first gay person, Tammy Baldwin from Wisconsin—was elected to the Senate.

I don’t believe President Obama is “the lesser of two evils,” as many people on the radical left have said. I pray he is a radical change activist and that he does not prove me wrong. I also believe he is a not so perfect human. But– for my social change activist friends who I admire from the depths of my being I have this to say—it is OK to celebrate. Social change ethics means knowing when to push, pull – and when to take a break, rest and celebrate. President Obama is not everything we ever wanted. There are many troubling things about his presidency—not the least of which are the drone attacks.

But he is not “the lesser of two evils.” He is a visionary man and activist and the president. Social change ethics demands we allow him to push, pull and take a break, rest and celebrate– also.

The night of the election I made a bet at the election party I was at– that the President would mention gays and/or lesbians in his acceptance speech for the presidency of the United States at least once. And he did—and I won. The woman who lost the bet said she was never so happy to pay off a debt in her life.

Celebrate. The table just got a lot more crowded—more places have been set. Gay people are not just being talked about—we are also finally doing some of the talking. We are in the house and seated at the table of American politics.

Just for this moment. Celebrate. We earned it.

Like Loading...
‹ Blessed Are The Organized, by Amy Levin
I Stand with Fr. Roy Bourgeois by Gina Messina-Dysert ›