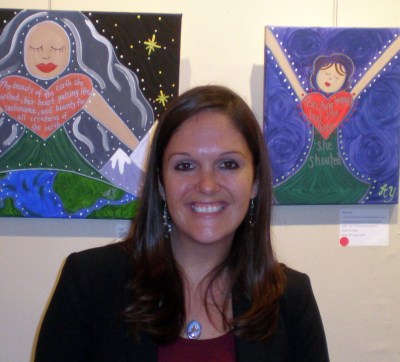 Also known as La Virgen de los Angeles, the Black Virgin is a very small representation of the Virgin Mary. She was originally discovered by an indigenous woman on August 2, 1635. When the poor indigenous woman tried to take the stone statuette, it miraculously reappeared. The people responded by building a shrine around her.

One may wonder where La Negrita came from and why this wandering woman tried to keep her. Legend has it that she came from stone, dark earth, tierra. Like the indigenous woman who discovered her, she represented the people of her homeland, indigenous Costa Ricans whose voices were often unheard. Like the anonymous indigenous woman who discovered her, she took up little space in the world, for she was only a tiny black stone less than a meter tall. As the Black Virgin is small in stature, the woman who first bore witness to her was small in society, relatively powerless, her body and being viewed as less-than. In these ways, La Negrita’s small and earth-bound stature evokes the people she represents.

What is more, though La Negrita may be small in stature, she works big and powerful miracles, often for the poor and marginalized. This is why so many Costa Ricans pilgrimage to her to request miracles and healing. It may also be why she is now dressed in an extravagant gold dress and standing upon a jeweled pedestal in the basilica. While some feel that such extravagance detracts from her humility, others claim that by elevating La Negrita’s dress and stature, all indigenous women are elevated, redeemed, and made a bit more holy and worthy.

I knew little of La Negrita when I was first commissioned to paint her. I knew she was part of the wider spirituality of La Morenita—the little dark one, the syncretized, often dark-skinned Mary—similar to Our Lady of Guadalupe and in stark contrast to elements of colonized Marian spirituality. Since I had the tremendous privilege of being commissioned to paint La Negrita by a brilliant scholar who resides in the borderlands as a half Costa Rican and half Salvadoran feminist, I was fortunate to learn, not only about La Negrita’s story, but of my dear friend and colleague’s story. Amidst our conversation and my research, I reread much of Gloria Anzaldúa’s work, contemplating mestiza consciousness, borderlands, and mujerista theology.

Like Anzaldúa and the colleague who commissioned this icon, I wanted to blend Spanish and English, acknowledging the constant flux of borders and cultures embodied in La Negrita’s being. I thought of Anzaldua’s Una lucha de fronteras/A Struggle of Borders:

Because I, a mestiza,
continually walk out of one culture
and into another,
because I am in all cultures at the same time,
alma entre dos mundos, tres, cuatro,
me zumba la cabeza con lo contradictorio.
estoy norteada por todas las voces que me hablan
simultáneamente.

“I am all the voices that speak to me simultaneously.” I thought of Anzaldúa, La Negrita, my friend, and I thought of tierra. Tierra is a Spanish word with multiple connotations, ranging from homeland, native land, earth, or even dirt/soil/earth. In these ways, tierra is like an intentional pun that has multiple meanings that aren’t easily translated into English. I thought about how La Negrita comes from tierra—a small black stone that’s part of the earth. She embraces all tierra—working miracles for all people from across the land. And Costa Ricans travel across tierra—their native land—to reach her.

And I thought of my brilliant friend and colleague. In many ways she is a lot like La Negrita: small in stature, living at the borderlands, traveling across tierra between Costa Rica and the United States, yet she does big, miraculous, and wonderful things.

As I stretched my canvas to paint La Negrita, I thought of these things. I knew I wanted to portray her in elements of her original form, particularly with a toddler Jesus wrapping her tiny body. Engulfed in black earth, yet shimmering bright, her heart is largest of all and it cries out to us:

From tierra, La Negrita’s
Heart of stone warmed
Upon the embrace of new life,
And so she embraced—miraculously—
All tierra

La Negrita’s powerful presence reminds us that no matter how small, how forgotten, how minimized our presence on this dark brown earth may be, we have the capacity to do miraculous things, good things, compassionate things. Like La Negrita, may we embrace all, warming hearts of stone into hearts that beat with love for all the earth, for all tierra.

Rev. Dr. Angela Yarber has a PhD in Art and Religion from the Graduate Theological Union at UC Berkeley and is author of Embodying the Feminine in the Dances of the World’s Religions, The Gendered Pulpit: Sex, Body, and Desire in Preaching and Worship, Dance in Scripture: How Biblical Dancers can Revolutionize Worship Today, and Holy Women Icons. She has been a clergywoman and professional dancer and artist since 1999. For more on her research, ministry, dance, or to purchase one of her icons, visit: www.angelayarber.com

Like Loading...
‹ Pope Francis is Paving the Way to FutureChurch by Gina Messina-Dysert
Choosing Well by Ivy Helman ›