Goddess Politics and the Cauldron of Memory by Kavita Maya 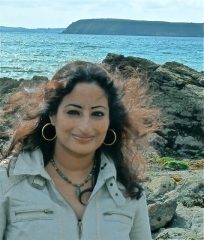 ‘Someone needs to gather the stories, to keep the cauldron,’ said the late Goddess feminist artist Lydia Ruyle during one of the last times we spoke, at the 2014 Glastonbury Goddess Conference. I had hinted at my concerns around conducting doctoral research in the presence of ongoing conflict within the Glastonbury Goddess community (especially when my broadly-stated site of interest is ‘politics’), and in reply she had stressed the need to ‘hold space’ for the different voices and perspectives in the UK Goddess movement, and that conflict would be inevitable. ‘There needs to be a weaver,’ she said.

The following day I recorded an interview with Lydia and some of her friends at Café Galatea on the High Street, which she had been keen to ensure since the previous summer—with poignant foresight, given her death in March 2016. I’m not sure if she was expecting that I should fully take on the role of this ‘weaver’—there are more stories than one PhD thesis can claim to encompass—but the theme is present in my writing. Her words lead me to reflect on the weaving together of politics with memory and storytelling, and on the need to honour the plural histories of the British Goddess movement.

Several years ago, one of my first considerations when designing fieldwork was how to understand the role of the Glastonbury Goddess community, currently the UK’s most visible site for Goddess spirituality, within a longer history. At that point the development of what I tend to call the ‘early’ UK Goddess movement seemed far more obscure to me than it does now—my thesis discusses its formation within 1970s and 80s socialist-feminist networks through the work of Asphodel Long, Monica Sjöö and other activists.

During fieldwork in Glastonbury, I met both town residents and people within the Goddess community who associated my research solely with the Glastonbury Goddess Temple community itself (known locally as ‘the Goddesses’), with no sense of the feminist significance of a ‘Goddess movement’, its history within the UK, or its connections to a larger Western feminist spirituality movement. Not everybody—but enough to remind me of the need to represent multiple stories within and beyond Glastonbury, and to re-weave the threads of the movement’s feminist history.

A recurrent topic arising in conversations with participants from 1970s-80s Goddess networks was that women drawn to Goddess spirituality today are less likely to associate the movement with politics. One person even expressed nostalgia when I used the phrase ‘spiritual feminism’, saying she hadn’t heard it ‘for many years’. The importance of recording the history of various aspects of the Goddess movement, including the Matriarchy Study Group and the movement’s association with radical and socialist feminism, was raised by several Goddess feminists I spoke with, in particular Lydia Ruyle and Daniel Cohen (who has contributed here on FAR), a close friend of Asphodel Long and Monica Sjöö.

Also noteworthy to me is the fracture between present-day Goddess spirituality and contemporary feminist ideas and networks. Some research participants located their active engagement with feminism in the past, as a completed stage in their life histories, while a few saw feminism itself as belonging in the past, with ‘spirituality’ its successor. (For those disengaged from it, I want to emphasise that feminist movement has continued to flourish and diversify, contrary to reports of its 20th-century demise.) With one, maybe two participants I was able to hold lengthy conversations about racial politics in the Goddess movement, while for the most part feminist expressions were non-intersectional. (I have introduced my work within a framework of intersectional feminist critique in a previous post.)

The importance of recognising that our collective stories are never singular is central to my understanding of feminist ethics. Stories are plural, multi-faceted and always political—in the sense of historically as well as socially embedded, related to power in ways that are gendered, ableist, raced and classed. The changing way we tell our shared stories in the present—what we collectively remember or forget—deserves careful attention, whether or not individuals choose to define themselves as activists.

While ‘weaving’ my thesis, something I have tried to keep in mind is how the stories we tell include or exclude others, marginalise some narratives but support others, both within the plural histories of the UK Goddess movement, but also in terms of broader questions of race and gender. For example, since the history of Britain is highly racialised, how Pagans and Goddess feminists tell stories about Britain’s past, their ‘ancestry’, their relationship to the land in which they live and their understandings of spirituality are also often racialised, perhaps in ways invisible to them (depending on their socio-historical position).

The critical component in my work has to do with examining the patterns woven through the movement’s historical and present forms, explaining how they carry traces of the past, and how they might shape the future. The point is that individually and collectively, turning away from the plurality of our communities and our shared, complicated histories tends to result in the repetition of harmful patterns, the repetition of silencing and marginalisation.

While writing this article I found myself thinking of the mother of the Nine Muses of creativity, Mnemosyne, Greek goddess of memory, a figure representing the capacity for profound re-imagination: what we remember and how we remember shape the politics of the present, but could also offer us the creative resources to tell stories differently, to transform the future—whether of a community, a movement, or a country.

Kavita Maya is a final-year PhD candidate at SOAS, University of London. Her doctoral thesis deals with a feminist and critical race analysis of the Goddess movement in Britain, based on fieldwork among the Goddess spirituality networks connected to Glastonbury, Somerset, the UK’s hub for countercultural spirituality. Her broader academic interests lie in the area of gender, religion and politics.

Like Loading...
‹ The Tension of Opposites: Love, Chaos, & the Wild Vortex by Christy Croft
Remember by John Erickson ›