Home › Ancestors › My Experience at Auschwitz by Ivy Helman

My Experience at Auschwitz by Ivy Helman 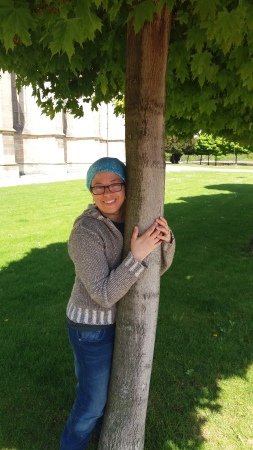 On August 4th, I visited Auschwitz.  In the beginning, the reality of the experience did not match my surrealist expectations of it.  I expected to walk onto the grounds and get hit over the head with the heaviness of what happened there, to feel a sense of deep connection to the land covered in the ashes of my people, to have the opportunity to mourn the loss of the members of my family I never met and to be utterly speechless as to the twisted systematization and industrialization of murder that took place there.  That blow never came.  Why?

The day of my visit was out-of-this-world hot.  My guided tour, in Czech, started at 2pm.  I was early so I wandered among the crowd outside of the site.  There were families lounging on the lawns eating ice creams and drinking cokes.  There were tourists taking selfies.  There were lots of conversations and lots of laughter.  I was pretty convinced that I was the only Jew around.

Upon entering the grounds, I was stunned by how green and lush it was.  There were many old brick buildings, seemingly orderly, with lanterns and building signs hanging outside the entrances.  Among it all, upwards of 500 people clustered in groups walked from place to place. 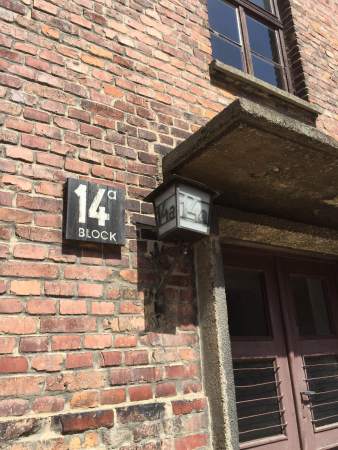 The tour began with a basic history of the events of the Holocaust with “exhibits” contained within 3 or 4 different buildings. The guide seemed to me to have memorized a script in which we went from one building to another looking at the “exhibits,” most of which consisted of nothing more than one or two oversized pictures and maps.  Outwardly, I sensed no sentiment in the guide and no spirit in the exhibitions either.  Her voice was monotone, pronouncing the Czech in such a syllable-by-syllable fashion that it was nearly incomprehensible.  Most exhibition rooms were sparse, if they had any objects at all other than the black and white pictures and maps.  The tour and exhibitions portrayed such a distance from the events it was almost as if they didn’t happen there, in that place. 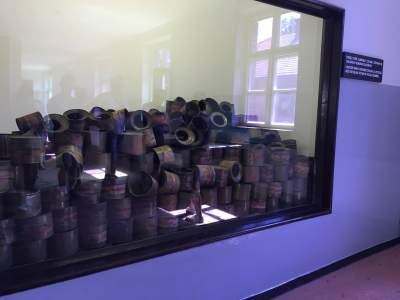 There were a few buildings with objects all hermetically sealed behind glass once again keeping us at a distance.  One room housed a display of used Zyklon B canisters and had an artist’s small scale all-white model of the “process of extermination,” meaning the “changing rooms,” “showers” and crematoriums – with tiny people crammed into the areas and bodies piled on the floors next to the ovens.  Two other buildings contained large displays, again behind glass and removed from their context, of what the exhibition called “evidence of the destruction:” piles of hair loosened from the burlaps sacks they had been founded in when the camp was liberated; shoes of the victims and a large (two-story) container filled with the pots and pans the victims had packed and brought with them but never used.

After we finished our tour of Auschwitz 1, we were given a 15 minute break and were instructed to 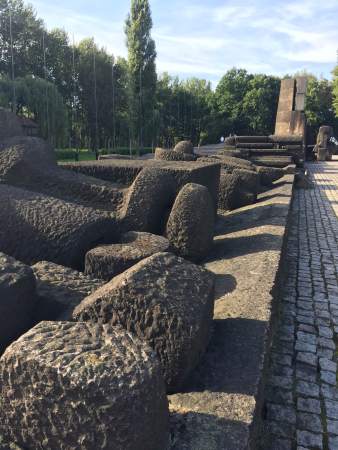 reassemble by the bus that would take us to Auschwitz-Birkenau.  Once there, we rushed through the camp at such a pace that we were done in about 45 minutes.  In spite of the rush, I did manage to leave two stones on the pillars, which marked where the ashes of the victims were scattered (buried?).  We glanced at the memorial at the back of the camp as well as what was left of the bombed-out crematoriums.  Returning to the front of the camp, we ducked into a reconstructed dormitory and a reconstructed bathroom building.  The guide asked if we had any questions.  Silence.  The tour was done.

I stood there debating what to do.  Do I leave?  Do I stay?  I was pretty confident that it didn’t feel right to just go.  So, I headed back to the memorial.  The tour guide had said that each of the smaller stones creating the steps and floor commemorated one of the 1.1 million Jews killed in Auschwitz.  Yet, it was unclear as to the meaning of the large stones.  After circling the large stones and a futile attempt to make some meaning out of them, I went and sat on the stairs of the memorial and just looked out over the place and the people there. 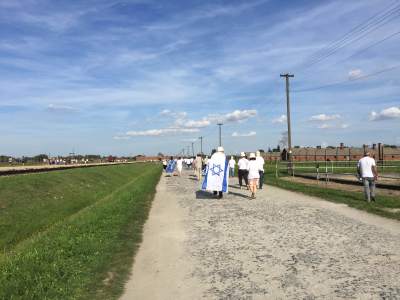 Still puzzled but needing to catch the train, I made my way to the entrance.  In front of me was a group of Israeli Jews wrapped in Israeli flags, looking the Superhero part.  Something changed.  Maybe I didn’t need the sad, mournful, pit-of-the-stomach experience.  Maybe I’ve had it enough, learned about it enough, taught it enough and lived with it enough.  Maybe my pilgrimage there as a witness to the horrors was enough.

It was those Israeli Jews that I needed.  Walking into Auschwitz was one thing, but they were proud Jews walking out.  I followed them.  We, Jews, were the lucky ones who got to leave.  Isn’t that something!

Like Loading...
‹ Priestess as Shamanic Path – Part 2 by Molly Remer
Thinking about Goddess and God by Judith Plaskow and Carol P. Christ ›