Springing Forward with the Wicked Witch by Barbara Ardinger

El Presidente was enlarging his war against his citizens. This meant the roads were more crowded than before with refugees fleeing the capital city for safety among the farmers on the plains and up in the hills. Some of these refugees arrived, of course, at the farm of the wicked witch.

Whenever a family arrived, the witch would put on her wickedest face and voice (she’d been practicing) and tell the children she was going to roast them and eat them with mashed potatoes and baby gravy. The children believed her for about a minute and a half, whereas their parents just smiled as each family was taken in hand by the senior refugees and led to rooms where there were new beds. The tenured refugees had (with the witch’s permission) taken charge and somehow found enough lumber to build two new rooms (lean-tos) at the side of the house. They were also working the farm and doing whatever they could with other providers of shelter to make newcomers as comfortable as possible. All the farms across the plains and in the hills had nearly run out of food to feed their guests, but with the coming of spring and tiny green shoots already showing, many of the people were hopeful.

But not the wicked witch. Tonight she was, as usual, up in her little study, exhausted after a day of working with the refugees and serving the new arrivals, including a trio of ancient grandmothers and an enfeebled paterfamilias. She watched Kahlil the raven as he peered suspiciously at her little dish of baby carrots.

“Will we survive this war?” she asked him. “We’ve got people sleeping in piles all over the house. We’re all hungry.”

The raven looked at her. “You don’t even wanna know what it’s like in the capital,” he said. He poked at her supper. “Grapes, but no eyeballs. Pah! Plenty eyeballs in the capital. I’ve learned to like fingers ’n’ toes, too, y’know, but these here carrots? Not even close. And them leafy green stems don’t even come close to blood vessels.” The witch just smiled. “I almost forgot,” he went on. “I brought a friend. Yo! Hamilton!”

Another raven poked his head around the window. When he came in, the witch saw that he had patches of white and gray feathers. “I can’t help but notice you trying not to stare at me,” Hamilton said. “Yes, I’m a raven. The coloring’s an egg defect. Where my mom and her sisters built their nests, all there was to eat was pesticide-coated grain. I’m the one that lived.” As the witch offered her sympathy, he went on. “But enough about that. Kahlil here is the prophet. I’m the divine messenger. Something has to be done to save our land.”

“Girlfriend,” said Kahlil, “y’all’re in a world a hurt. Didja know there was once a Parliament of Fowls? Long time ago. Poet named Chaucer wrote about it. Well…me ’n’ Hamilton are here with a plan.”

The next day, the wicked witch consulted with several refugees, who promptly set out to gather supplies. At the same time, the ravens flew out to station themselves along migratory paths. A few days after that, the refugees were constructing a scarecrow. It was tall and thick and had ugly straw hair. Someone found a red baseball cap to hide the hair. Then they set the scarecrow up in the middle of a rocky field owned by one of the witch’s neighbors. (The neighbors and their refugees had quickly become enthusiastic supporters of the ravens’ plan.)

Then the birds began to arrive, thrice thirteen of them, and thrice more, and thrice again, birds large and small—a pair of storks, a golden eagle, hawks and pigeons, flocks of geese and swans, starlings, terns and gulls, parrots, a whole flock of scarlet macaws, sandpipers, robins and sparrows, a chorus of nightingales, even a pair of intrepid hummingbirds. As the sun began to set on the night of the dark moon, the birds formed a triple spiral around the scarecrow. Behind them those refugees and neighbors who wanted to participate in the ritual gathered in circles. It was a great diversity of birds and people, and pretty soon some of the surviving dogs and cats (and a few wilder creatures) also joined the circle. Hungry as the animals were, none bothered the birds. Or each other.

The wicked witch stationed herself among the birds on the north side of the spiral. Holding her grimoire cradled next to her heart and raising her bundle of sage, garlic flowers, basil, and rosemary like a torch above her head with her other arm, she stood quietly until the circle grew silent. “Breathe,” she said. “Connect with each other and with Mother Liberty.” Soon she felt the energy of breath around her. “We are here to do what we can,” she said. ‘Perhaps not enough, for we are poor people. Our intention is to bind El Presidente. I believe that if enough people across our lands will also do binding spells of their own devising, then the greater magic will take hold. And he will be bound.” 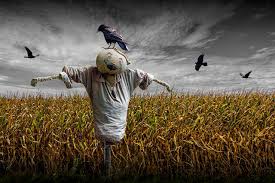 Now the birds all began flapping their wings to raise more energy, and the wicked witch directed the people to visualize the binding itself. “Sew his mouth shut,” she said. “Tie his hands and arms to his sides. Tape his legs together. Bind El Presidente so that he can neither speak nor move.” As she spoke and the people visualized the binding, the avian prophet and the avian messenger flew to the scarecrow and perched on its shoulders. What they spoke into its straw ears, they never said… but when the people opened their eyes again, the scarecrow had crumbled, its red cap was shredded, and the flapping of the birds’ wings was blowing the scattered straw into the air above the heads of the people. Magic was in the air. Where will it go? That I cannot guess.

Like Loading...
‹ What is the Most Dangerous Breed? by Karen Leslie Hernandez
It’s a Small Thing in Relation to Everything Else: Or Is It? by Carol P. Christ ›