In a world where humans were small and nature was big, surrounded by forests of trees of immense size and stature, it’s not surprising that the ancient Celts came to hold trees as sacred. Like many others, the Celts revered the World Tree or the Tree of Life as the mythic bridge between heaven and earth. The roots reach down and ground with the Earth while the branches spread their canopy up to the heavens.

During the Neolithic period the original peoples of Ireland created their sacred sites with timber circles, consisting of concentric rings of freestanding timber surround by a bank and a ditch. These sacred trees were later replaced with stone markers, keeping a more permanent watch over the area.

The Celtic tribes designated particular local trees of each area as sacred. The earliest form of Celtic writing, the ogham alphabet, developed from the Celts’ veneration of trees. Each symbol of the alphabet, which many believe was used mainly for esoteric purposes, was associated with a particular tree. In a leap of connection, the ancient Celtic mind linked their alphabet with their calendar and their sacred trees. The Celtic year has 13 lunar months, each one named as one of the sacred trees.

It’s hard for us to imagine today joining our time consciousness with trees in a way that defines the movement of our lives with a sacred connection to trees. The ancient forests of Old Europe are almost all gone now and the deforestation of the United States still continues. Yet even though we rush around from task to task more connected to our electronic devices than to nature, trees still move us into a place of awe and wonder.

I suppose my own Celtic heritage surfaces in my love of plein-air painting and drawing of trees. I have spent many wonderful moments connected to the cosmos through this intense viewing of olive trees, cottonwood trees, and oak trees. Even words about trees can move me to taking brush in hand in an exploration of the sacred nature of tress.

I was recently inspired by Elizabeth Cunningham’s words in the second novel of her Maeve Chronicles, The Passion of Mary Magdalene. She describes a magical, mystical experience in a sacred grove which transformed into a Goddess Temple. In this temple was a central pillar which was a great tree with stars in its branches.  An image of a star tree bloomed in my mind’s eye.

So once again I set off on the trail of manifesting an esoteric feeling/experience into a concrete image. I have found this path to be elusive in the past, requiring multiple studies on paper and much finding and destroying and finding again of the image on canvas. My vision of The Star Tree and my attempt to manifest it onto canvas has been no different.

I worked back and forth on these two studies using gouache on paper. I felt drawn to connect a Star Goddess to the Star Tree. Then neither seemed to work for me so I started working on canvas. That process opened a new vision for the studies, which I then went back to working on and brought to this end. 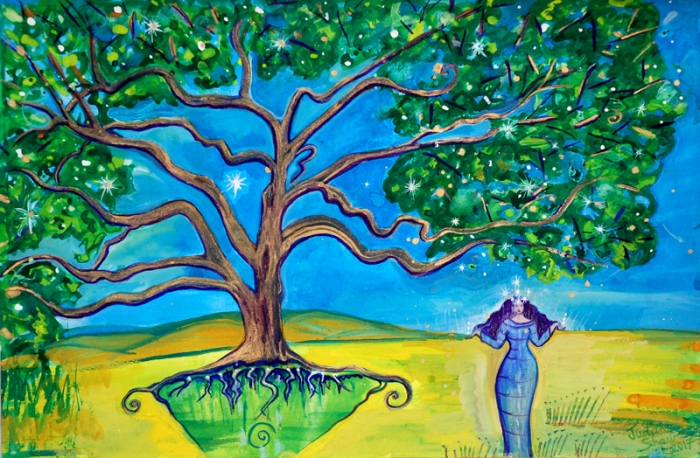 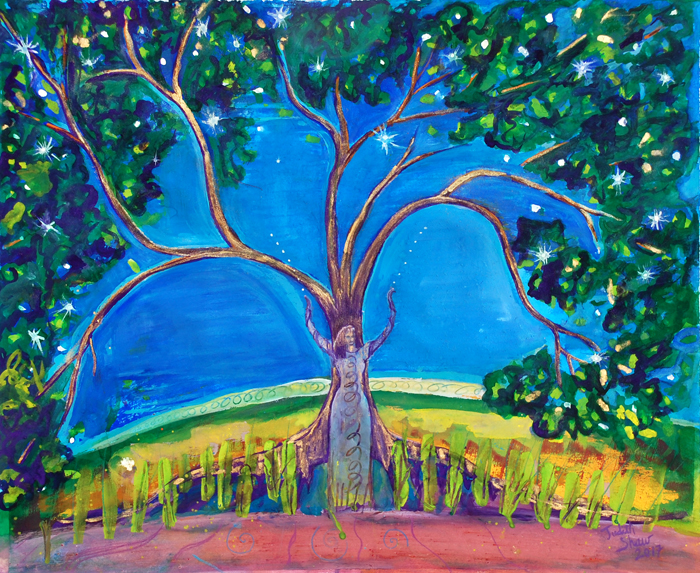 Reworking the studies opened a new vision for the oil painting. It might be done as it is now but you never can tell since there’s not my usual layers and layers of paint. If I work on it more, I’ll post an update here.

Trees and Goddess have merged as one in my mind. They both express the truth that body, soul and spirit are one; that heaven and earth continually interact with one another; that life on Earth is good and beautiful; that the whole Earth is spirit made flesh. May you feel the power of the stars swirling around us in the heavens, the Tree of Life which connects us on Earth to the stars in the heavens and the Goddess who reigns over all.

Sources: The Wisdom of Trees in the Celtic Landscape, The Sacred Trees,

Judith Shaw, a graduate of the San Francisco Art Institute, has been interested in myth, culture and mystical studies all her life.  Not long after graduating from SFAI, while living in Greece, Judith began exploring the Goddess in her artwork.  She continues to be inspired by the Goddess in all of Her manifestations. Originally from New Orleans, Judith now makes her home in New Mexico where she paints as much as time allows and sells real estate part-time.  Give yourself the gift of one of Judith’s prints or paintings, priced from $25 – $3000.