Talking about Privilege with Nuance by Elise M. Edwards 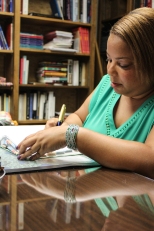 Yesterday evening, I led a seminar at a local church as part of their series on “Unpacking Privilege.” Once before, I’d been invited to this church, Lake Shore Baptist Church, to speak about intersectional feminism with one of my colleagues, so I expected them to be open-minded and welcoming.  They were.  Although the attendees were overwhelmingly white and older than me, they were attentive and engaged.  We had an enriching time together diving into topics like male privilege, white privilege, and class privilege with Peggy McIntosh’s 1989 essay “White Privilege: Unpacking the Invisible Knapsack” as a resource.  (If you are unfamiliar with it, I recommend taking a few minutes to read it and reflect.)

In the essay, McIntosh writes about becoming critical of male privilege and men’s obliviousness to it through her work in Women’s Studies, which then led her to see her own race privilege (as a white woman) and her obliviousness to it.  The essay does not offer a precise definition of white privilege, but the entire piece is a reflection about it.  She explains:

“I have come to see white privilege as an invisible package of unearned assets which I can count on cashing in each day, but about which I was ‘meant’ to remain oblivious. White privilege is like an invisible weightless knapsack of special provisions, maps, passports, codebooks, visas, clothes, tools and blank checks.”

Comparing her own circumstances with some African-American women she worked with, McIntosh lists multiple examples of white privilege.  While her examples are illustrative and evocative, McIntosh has cautioned readers from taking them to be definitive, as they come from her own experience.  Taking cues from her work, in last night’s seminar, we focused on sharing our own experiences as testimony or autobiographical insight instead of forming precise definitions about what privilege is.  I’ve learned that intentional attention to people’s lives is a critical part of feminist, womanist, and liberationist methodologies.  Adopted in this church seminar, the emphasis on speaking our own experiences allowed our learning to be cooperatively constructed: I provided the framework for our discussion, McIntosh provided accessible, yet provocative descriptions of privilege and the seminar participants offered their own examples of insights into why privilege is difficult to acknowledge.

Although we focused on personal experience, the seminar was not about airing grievances.  Rather, my aim for both seminar participants and readers here is to make us aware of privilege’s systemic nature and the multiplicity of forms so that we can first recognize, and then address the injustices that result from it.  Privilege is ultimately about power, not just feelings of exclusion.  As McIntosh explains, white privilege and male privilege “simply confer dominance because of one’s race or sex.”  By developing nuance in our understanding of privilege, we can understand the different ways that privilege confers dominance and provide alternatives to it.

I chose to explore McIntosh’s essay because when I teach lessons on racism, sexism, and heterosexism in my university classes and I introduce the concept of privilege, time demands often prevent us from drawing out its fine points.  But the church context provided the opportunity for subverting this pattern.  Last night’s seminar was the third in a series on privilege and the church is progressive enough to be familiar with language about social justice that we could do an exercise I’ve thought about bringing to my classroom. It’s prompted by McIntosh’s statement that “we need a more finely differentiated taxonomy of privilege.”  We named some examples of white privilege, but then contextualized them and differentiated between conditions of daily experience that unfairly empower some people over others vs. conditions we would want everyone in a just society to have.

Let me provide an example of privilege that empowers one group over another.  In many academic disciplines that work with cultural traditions (like the study of religion or theology), the writings of European males form a dominant canon that is taught and referenced in the discipline’s ongoing work.  We expect scholars from all kinds of backgrounds, even those of non-European descent to become conversant with the canon, whether it reflects their own cultural heritage and social context or not.  And yet, it has been my experience that male scholars of European descent are not expected to have the same familiarity with writings beyond their context.  We often expect women and non-whites to know their own traditions and the male-dominated, Eurocentric canon.  It is clear who holds the power.

And yet, McIntosh provides a related example of a condition that we’d want everyone to experience if the world were just: “I can be sure that my children will be given curricular materials that testify to the existence of their race.”  Seeing one’s own people in the educational curriculum is not a form of privilege we should want to take away from the dominant group.  It is a form of privilege we need to extend to others so that they, too, have their contributions to society affirmed.  By extending this form of privilege, its ability to disproportionately confer power on one group over another is dissipated.

I concluded the seminar with a discussion of responses to counter privilege.  Recognizing it is important, but McIntosh offers another suggestion, too.  Those of us who have some form of privilege should use our “unearned advantage to weaken the systems of unearned advantage.”  In my next post, I’ll expand on this point and connect it to Christian theologies.  In the meantime, I’m interested to hear about your experiences of either benefiting from or being disadvantaged by privilege and what we should do to disrupt these systems.

Elise M. Edwards, Ph.D. is a Senior Lecturer in Christian Ethics at Baylor University and a graduate of Claremont Graduate University. She is also a registered architect in the State of Florida. Her interdisciplinary work examines issues of civic engagement and how beliefs and commitments are expressed publicly. As a black feminist, she primarily focuses on cultural expressions by, for, and about women and marginalized communities. Follow her on twitter or academia.edu.

Like Loading...
‹ “Closer to Fine:” Trans Femme Reflections on the Sacred Found in Lesbian Music Culture by Nathan Bakken
Her Love is the Love of God by Natalie Weaver ›