Home › General › Rituals of “Re-birth” Are Based in Matricide by Carol P. Christ

Rituals of “Re-birth” Are Based in Matricide by Carol P. Christ 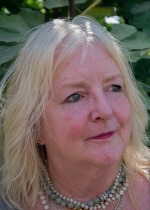 The other night, while I was having dinner with two Greek women friends, one of them asked me what I learned studying theology at Yale. I responded that I learned that woman was created second; that she brought sin and death into the world; and that therefore woman must obey man.

Spurred on by a bit of red wine (on my part) and ouzo (on theirs), our conversation quickly turned into to a dissection of the Greek baptism ritual. I noted that during the baptism of her grandchild, my friend’s daughter was standing outside the church talking to me. When asked why, the young woman stated that the mother had no part in the ritual. This prompted one of us to ask whether the mother was even allowed in the church during the ritual.

In fact, the mother is allowed in the church, but our instincts was not wrong: the mother’s presence is irrelevant.

My mind floated back to a conversation I had with a Jewish feminist friend about her son’s circumcision. She stated that as a feminist she did not agree with a ritual that initiates a baby boy into the Jewish community but excludes girls. She said she did not like the idea that her baby would have his penis cut as a symbol of his entrance into the Jewish community. (Her reasons for agreeing to the circumcision were complicated.)

“But,” she continued, “my experience of my son’s circumcision did not focus on any of that. What became central for me,” she said, “was that I was required to hand my son over to his father and a group of men who would perform a ritual in which I had no part. I understood on a bodily level that they were taking my baby from me. The purpose of the ritual is to break the bond between mother and child.”

In the Greek Orthodox baptism, as in the Jewish circumcision, the mother must hand her baby over to others. “The godparents take possession of the child in the narthex [the entrance to the church]. There the priest removes Satan from the child. The prayer is followed by three Exorcisms.”

What mother could ever believe her child was possessed by the devil until a priest intervened?

If the child is a girl, the priest recites additional words that remove the sin of Eve from her tiny body. (The fact that girls and boys are treated differently at this point is not mentioned in the source from which I am quoting. Most parents miss this reference to theological dogma concerning the sinfulness of the female sex.)

Some mothers may believe what they have been taught about the sin of Eve, but I doubt that it would ever cross any mother’s mind to think that her baby daughter is already contaminated by this sin. The fact that the mother is not holding her child while the exorcisms are performed makes it clear that her opinion is of no consequence. She will hold her tongue.

When the exorcism is completed, the godparents follow the priest into the sanctuary. There the baby’s clothes are removed. “The person to be baptized (now undressed) will be anointed with the blessed oil on the forehead, nose, ears, mouth, chest, legs, feet, hands and back. The Godparent will then anoint the person to be baptized, to prepare him/her, just as an athlete prepares, to battle the demon who he has just renounced and to slip away from the grip of sin.“ (I have been told that the baby’s genitals are also annointed, but the source I am quoting also omits this fact.)

The baby is then placed in the hands of the priest, a man with a long beard, dressed in a long robe, black or brocade. The priest grasps the squirming baby in his unfamiliar hands, raising it above his head so that the whole congregation can see the baby’s nakedness.

The baby may be too young to feel shame at nakedness, but it knows that something is going terribly wrong.

The priest thrusts the baby into the cold water of the baptismal fount, making sure that its head is under the water. The baby is pulled from the water gasping for breath. And then it happens again. And again.

“Now the neophyte will be immersed three times in the Font which represents the ‘Tomb of Jesus’, symbolically being ‘buried’ with Christ, then ‘raised’ with Christ as the neophyte is removed from the Font and placed in the arms of the Godparent who is waiting for him/her with a white sheet. The truth of baptism  , , , is that the candidate for baptism has chosen to die and be reborn for Christ. ” 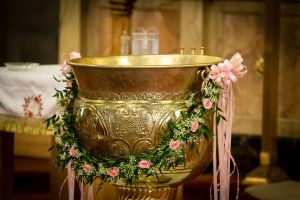 During baptism, when the baby is crying for dear life, it knows that what is happening is not right.

Imagine if Uncle John forced a baby’s head under the bath water.

Any good mother would grab the baby out of Uncle John’s hands and tell him never to come near her baby again. The police might be called. They should be.

But when the act of holding a child’s head under the water is performed by the priest, the mother is not allowed to protect her child.

After the baptism, the child (if it is male) is taken behind icon screen to be presented to God. As girl and boy babies are not generally baptized at the same time, most parents are not aware that female children are not entitled to this honor due to the sin of Eve. (The source I am quoting again fails to note the differential treatment of male and female babies.)

“If the newly baptized person is a child, the mother of the child will then be called by the Priest to make the sign of the Cross and venerate the Icon of Christ thanking Him for the great blessing of rendering her child a Member of His Church. She will then be asked to kiss the hand of the Godparent as a sign of respect and gratitude for having assumed the high responsibility of assisting in the spiritual development of the child throughout its life as a member of the Church.”

Having claimed the child as its own, the Church also takes over the role of feeding it: “For at least the next three Sundays after the Baptism, the Godparent will take the child to Church to receive Holy Communion, its first taste of the Body and Blood of the Lord. Just as a mother physically nourishes the newborn infant with milk, so too the Grace of God offers as spiritual food, Holy Communion to its newest member, just born through baptism.”

My Jewish feminist friend was right.

The message of rituals of “re-birth” is clear:

Need I mention that in the religions that preceded patriarchy, birth was sacred, motherhood was revered, the cries of children were not ignored, and the Mother Goddess was worshiped as the Source of Life.

Though I have focused on the Jewish ritual of circumcision and Greek Orthodox baptism, the point I am making is a general one. All rituals of re-birth intend to break the bonds between mother and child and to declare that the father and fathers are the only true parent. This is the matricide at the heart of patriarchy and patriarchal religions.

Like Loading...
‹ Would You Rather Just Not Be? by Esther Nelson
Week 3 – Goddess Birthing Liberation: A Feminist Advent Daily Devotional by Trelawney Grenfell-Muir ›