Home › Activism › To Have and to Hold: Gay Marriage and the Religion Question

To Have and to Hold: Gay Marriage and the Religion Question

Outrage.  Anger.  Fear.  Hatred.  These are just a few of the words that flashed across my Twitter feed as I woke up on that fateful Wednesday, June 26 morning when the Supreme Court of the United States ruled that the Defense of Marriage Act (or DOMA) was unconstitutional and that supporters of Proposition 8, the hotly contested voter initiative in California that banned same-sex marriage, had no standing.   People were mad.  However, it wasn’t just the typical kind of mad that is associated with hatred, it was a type

of mad that was met with impossible anguish because what I was reading and feeling was a result of one thing: there was nothing more they could do.

What does all this mean?  Questions from friends and family were filling up my inbox and although I wanted to take a moment to just hit “Reply All,” and input the words: Equality, I had to hold back and start to examine the notion that although equality may now be firmly on the proverbial table, there is still a lot of work to be done, specifically for gay marriage and those wanting to marrying inside the traditional church spaces they grew up in and not just the ones that have come out as open and affirming in recent years towards LGBT individuals.

The ongoing shift of public opinion in support of gay marriage and LGBT rights in recent years is encouraging but it still is only one piece of the puzzle.  Working for the City of West Hollywood has granted me the opportunity to see first hand the beauty and the work still left to be done.  Although organizations such as California Faith for Equality or Equality California are doing an excellent job in recruiting faith-based communities and other religious organizations to join the fight for LGBT equality within religious communities the work and conversations that need to still occur outside of open and affirming churches is becoming a daunting and often overwhelming force of opposition.  The amount of individuals who still do not support gay marriage or LGBT rights in general in conservative and oftentimes hyper patriarchal religious traditions such as Catholicism, Mormonism, Islam, Judaism and other conservative Evangelical traditions still remains a daunting number and it only appears to be growing now that there has been such a public declaration from public policy and legality standpoints that echo Hilary Clinton’s famous words that: “gay rights are human rights.”

The question that remains is not why do these religious groups not support gay marriage or LGBT rights in general but how are individuals, typically on the outside, supposed to convince members of these faith-based traditions to leave or possibly change their opinions if they still remain steadfast and stubborn on other progressive causes that are often discussed on this very blog.  Women’s ordination, sexual ethics, women’s rights, and theological and religious equality in general are just a few causes that individuals on the outside believe would be no brainers when compared to tackling the issues of gay marriage and LGBT rights but still we have on-going and often exhaustive conversations about ensuring the full rights of women in faith-based traditions and communities.

The other question that remains may seem to be the icing on the cake but it is really the tip of the iceberg when we discuss issues like equality within religion: if people refuse to leave their religious traditions and communities when women, who are oftentimes the reason for the very success of not only religion but also faith-based communities in general, then do we really think or expect that they’ll leave when their LGBT brothers and sisters are also denied that same type of recognition but on top of it constantly told they are sinners and are going to hell?  If a conservative religious traditions can’t give their mothers or sisters full equality, how can we expect them to give LGBT individuals the time of day? 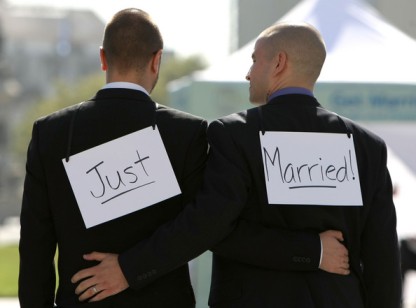 The issue of equality doesn’t just stop at gay marriage and LGBT rights but only begins there.  Women’s rights, women’s ordination, and even the idea of a woman President are the only a few of the other pieces of the equality puzzle anxiously awaiting to be put together.   As we have seen with the fight for equality, groups are banding together now more than ever before and although gay marriage may be on the front page of newspapers today, who knows what tomorrow could bring.

John Erickson is a doctoral student in American Religious History at Claremont Graduate University.  His research interests involve an interdisciplinary approach and are influenced by his time as the director of a women’s center and active member in the GLBTQ and women’s rights movements.  His work is inspired by the intersectionality of  feminism, queer identity, and religious political and cultural rhetoric.  He is the author of the blog, From Wisconsin, with Love and can be followed on Twitter at@jerickson85.

Like Loading...
‹ What Is Patriotism? by Carol P. Christ
Feminism and My Existentialist Leanings by Xochitl Alvizo ›