Solidarity Thy Clothing is a Black Gown by Anjeanette LeBoeuf

On Sunday, January 7th, a highly visible and poignant protest and stance was made. The 75th Golden Globes was the frontline to which the privileged Hollywood A-Listers took a stance. They collectively drew a line, a call for change.  A straightforward act of wearing the color black, spoke volumes. Gone were the entertainment commentators stating which color was bold or trendy. The focus was on the collective statement that was being made on the red carpet. Countless actors voiced their own stories of #WhyWeWearBlack, they called out executives who are complicit in maintaining pay inequality, in hiding sexual abuse and intimidation, in the unequal job opportunities, and even in the lack of recognition.

Before the awards even aired, rumors flew that actresses attending the ceremony were going to dress in black as an act of protest, a marker of solidarity, and a call for commitment. This came out of the watershed events of Harvey Weinstein, Kevin Spacey, Senator Al Franken, and so many more. It was built upon the backs of the Women’s March of 2017. It was fueled by the #MeToo campaign that saw people across mediums, across states, and across socio-economic ranks to voice their own struggles, treatments, and experiences. These powerful moments have not just been high traffic social media bleeps, a growing trend to be replaced by the next hot topic. No, they have only gained steam and have raged for the better part of a year.

The media was highly focused on allowing more and more women to step forward and voice her struggles, her pain, and the wrongs committed. And it was in this spotlight of these horrors which the ‘glamorous’ have also had to endure, that more and more women find companionship. Alianza Nacional de Campesinas (The National Farmworker Women’s Alliance) wrote a letter of solidarity to the women in Hollywood and brought a voice to the endemic problem that our society has maintained.

“Even though we work in very different environments, we share a common experience of being preyed upon by individuals who have the power to hire, fire, blacklist and otherwise threaten our economic, physical and emotional security.”

This letter is a shining example of the meaning of solidarity. That the illumination to the inequalities and corruption faced in Hollywood is just one of many environments to which this is taking place. From this letter, a group of women got together, organized, and created a movement, a legal strategy, and a rallying point. They created TIME’S UP. A legal, social media, and organization that is seeking gender equality and elimination of sexual and gender harassment. Their website states,

“TIME’S UP is a unified call for change from women in entertainment for women everywhere. From movie sets to farm fields to boardrooms alike, we envision nationwide leadership that reflects the world in which we live… No more silence. No more waiting. No more tolerance for discrimination, harassment or abuse.”

Added to the many voices which called attention to the blatant and systematic abuse that had been growing like a cancer in Hollywood – came the voices of many more outside of the industry crying out, adding to the unity of experiences, of struggles. That it was much bigger then the glittered streets of Hollywood.

The wearing Black campaign became a way to acknowledge this, a way to show support. The clothing protest was furthered also with attendees wearing TIME’S UP and HEFORSHE pins,

Debra Messing called out the entertainment news company who was interviewing her for their overt gender pay inequality. When both actors and actresses took the stage at the ceremony, the focus was on the power of the movement, the power of the moment, and what it means for the status quo. Natalie Portman brought to light that yet again the category for Best Director was a list of all men. In a historic win, Oprah Winfrey became the first African American Woman to be awarded the Cecil B. DeMille award for outstanding contributions to the world of entertainment. She received 4 standing ovations during her speech. A speech which will live in infamy with its poignant words of truth, history, and hope.  She brought to light Recy Taylor and her plight during the Jim Crow era to receive justice for the crimes committed to her.  And in a time when our nation’s leader takes to Twitter to provoke, ridicule, and enrage, Oprah’s speech has become a voice of reason and inspiration:

“What I know for sure is that speaking your truth is the most powerful tool we all have. And I’m especially proud and inspired by all the women who have felt strong enough and empowered enough to speak up and share their personal stories…But it’s not just a story affecting the entertainment industry. It’s one that transcends any culture, geography, race, religion, politics, or workplace. So, I want tonight to express gratitude to all the women who have endured years of abuse and assault because they, like my mother, had children to feed and bills to pay and dreams to pursue…They’re the women whose names we’ll never know. They are domestic workers and farm workers. They are working in factories and they work in restaurants and they’re in academia, engineering, medicine, and science. They’re part of the world of tech and politics and business. They’re our athletes in the Olympics and they’re our soldiers in the military…For too long, women have not been heard or believed if they dare speak the truth to the power of those men. But their time is up. Their time is up. Their time is up.”

In solidarity, with hope for the future, we must use our voices, take to the street, cast our votes, and move towards a future with equality, justice, peace, and prosperity. 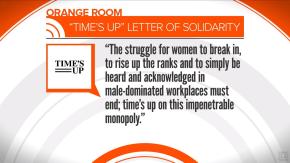 Anjeanette LeBoeuf is a Ph.D Candidate in Women Studies in Religion at Claremont Graduate University. She is the Queer Advocate for the Western Region of the American Academy of Religion. She is currently a Lecturer of Asian Religions at Whittier College. She is a Wabash Teaching Fellow for Claremont McKenna College. Anjeanette also writes the for activist blog, Engaged Gaze. Her focuses are divided between South Asian religions and religion and popular culture. She has become focused on exploring the representations of women in all forms of popular culture and how religion plays into them. She is an avid supporter of both soccer and hockey. She is also a television and movie buff which probably takes way too much of her time, but she enjoys every minute of it. Anjeanette has had a love affair with books from a very young age and always finds time in her demanding academic career to crack open a new book.

Like Loading...
‹ A Time to Make New by Deanne Quarrie
Run Women Run! You Can Do Better than a Mediocre White Man! by Carol P. Christ ›