Home › Feminism › I am in Peace: The Ministry of Margaret Fell by Mary Sharratt

I am in Peace: The Ministry of Margaret Fell by Mary Sharratt 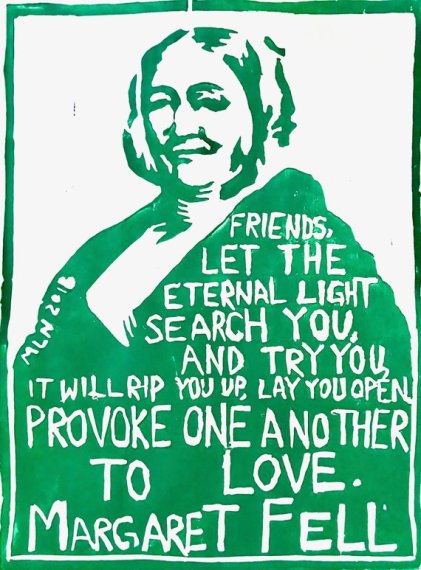 This linoprint of Margaret Fell can be ordered here.

Pendle Hill will forever be associated to the Pendle Witches of 1612 who live on in the undying soul of the landscape and its folklore and who inspired my 2010 novel, Daughters of the Witching Hill. Pendle Hill also gave birth to the Quaker movement.

In 1652, George Fox, a simple weaver’s son and cobbler’s apprentice turned dissenting preacher, wandered across England on a spiritual quest. When he climbed Pendle Hill, his revelation came to him—an event that would change both Fox and the world forever. He envisioned a “great multitude waiting to be gathered.”

As we travelled, we came near a very great hill, called Pendle Hill, and I was moved of the Lord to go up to the top of it; which I did with difficulty, it was so very steep and high. When I was come to the top, I saw the sea bordering upon Lancashire. From the top of this hill the Lord let me see in what places he had a great people to be gathered.

The view of Pendle Hill from my back garden.

Later when he walked on to Firbank Fell and met with the Westmoreland Seekers, he found his “great multitude.”

Wandering still further, Fox came to Swarthmoor Hall in Cumbria where he hoped to discuss his revelations with the lord of the manor, Thomas Fell. Instead he met Margaret Fell, the mistress of the house, a woman who had been searching for spiritual direction for the past twenty years.

From the first time Fell heard Fox preach, his vision became her own. In the following three weeks, Fell, her children, servants, estate workers, and many inhabitants of Furness became a part of the Society of Friends. When the lord of the manor finally returned, he found himself in a Quaker stronghold.

Fell eventually managed to reconcile her husband to their unusual guest, but Thomas Fell never converted. He did, however, allow his wife to use Swarthmoor Hall as a meeting house for worship. Through the 1650s, Swarthmoor Hall became the powerhouse of the Quaker movement. Thomas died in 1658, leaving the estate to Margaret.

Regarded by many as co-founder of the Quaker movement, Fell devoted her life to the Society of Friends. She wrote epistles and funded missionaries. One of the few early Quakers who was a member of the gentry, she interceded on behalf of her co-religionists who were arrested for illegal preaching or refusing to take oaths. In 1660 and 1662 she traveled to London to convince King Charles II and his parliament for freedom of conscience.

In 1664, Fell herself was arrested for failing to take an oath and for allowing Quaker Meetings to be held in her home. She spent six months in Lancaster Gaol, where she was sentenced for life imprisonment and forfeiture of her property. While in prison she wrote religious pamphlets. Her most famous work is “Women’s Speaking Justified,” a scripture-based argument for women’s ministry. From its very inception, the Quaker religion insisted on gender equality, women’s right to preach, the abolition of slavery, and the immortality of war.

In 1668 Fell was released from prison by order of the king. The following year she married George Fox. Returning to Lancashire, she was arrested again. Shortly after her release, Fox departed on his mission to America, only to be imprisoned on his return to England.

Surviving both her husbands, Fell remained a religious activist into her eighties and finally died in 1702 at the age of 88. Her last words were, “I am in Peace.”

Mary Sharratt makes her home in the Pendle region of Lancashire, England, the dramatic setting for her 2010 novel, Daughters of the Witching Hill. She is on a mission to write women back into history. Her most recent novel Ecstasy is about the composer Alma Schindler Mahler. Visit her website.

Like Loading...
‹ Eve by Any Other Name… by Janet Maika’i Rudolph
Gendered Only In Expression by Christy Croft ›