Home › Ancestors › The Tree as Mother by Mama Donna Henes

The Tree as Mother by Mama Donna Henes

Arbor Day, Earth Day, May Day and Mother’s Day are deeply connected conceptually, etymologically, culturally and emotionally.
The tree, with its roots buried deep in the earth and its branches reaching upward toward heaven, spread wide to embrace all of eternity, is a prime symbol of life in many cultures. Trees have long been worshipped as beneficent spirits of bounty. Trees, after all, shade and feed us. Supply and sustain us. Serve us in endless ways. Trees breathe life into our lungs, the source of endless inspiration.
Possessing the potent powers of fertility, growth, resilience and longevity, the tree is widely seen as the progenitor of the world Family Tree. The Tree of Life. The tree goddess was seen as a sylph, an airy tree spirit who resides among the green leaves, sustaining and nurturing the vegetative forces. She is the symbol of the flow of life, a Mother Goddess who is Herself the Tree of Life.
The Maasai people claim their descent from an original parent tree. For the Slavs, The World Tree is the symbol of all relationship, and as such, is held as the central philosophical image in that culture. The Maya of Central America understand themselves to be part of a great celestial ceiba tree. This silk-cotton tree, which stands for all life is the pole at the center of the Earth and serves to hold up the heavens. The Koran refers to the cosmos as a tree.
Yggdrasil, the World Ash, is the tree goddess of the Scandinavian underworld who overreaches the human abode, touching the sky with Her branches. Her roots reach to the very center of the Earth where they wind around the sacred wells, the deep source of wisdom.
The Hebrew goddess, Asherah, was associated with a sacred tree. Asherah was also called “Lady of the Sea,” “Tree of Life,” “She Who Gives Birth” and for the Caananites, “Mother of the Gods.” Through Her association with trees, She was seen as the bringer of fertility, new growth and successful crops. She was the conscientious caretaker nurse of nature. The Canaanite Goddess of Love, Fertility and Childbirth was Malidthu the spirit of the fragrant Myrrh-tree. The sycamore specifically was regarded as a manifestation of the Egyptian goddesses Nut, Isis and Hathor, “Lady of the Sycamore.”
The Greek goddess Athena was represented by an eternally flourishing olive tree. Aphrodite was associated with the myrtle tree. Helen, of Troy fame, was worshiped as a tree on the Greek island of Rhodes into the 19th Century AD.
Old European spring festivities were held in honor of the trees and their mistresses, the virgin vegetation goddesses. Mid spring was celebrated as Floralia by the Romans, Walpurgisnacht by the Tuetons and Beltane by the Celts, romantic devotions for Flora, Walpurga and Maia, for whom this month is named.
Maia, whose name means “grandmother, midwife or wise one,” can be traced back to Maya, the pre-Vedic mistress of perceptual reality who was the virgin mother of the Buddha. The Greek goddess, Maia was the virgin mother of Hermes. The Blessed Virgin Mary, Mother of Christ, is the patroness of the month of May, which the early church dedicated to Her. 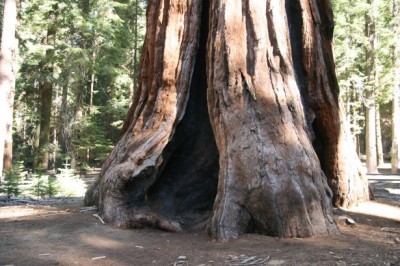 The redwoods in Oregon and California are the largest and oldest living beings (I cannot call them “things”)on Earth. Unimaginably 40 stories tall and thick, they have been growing for four thousand years and they are growing still. The secret of their survival? In times of drought they reach out with their root systems to connect with their neighbors, thus allowing them to share whatever water there is. Those majestic, mighty mamas slung with shawls of moss stand stolidly in the heart of the primordial fern forest. As old as Egyptian papyrus, they stand there and bear witness. Standing tall through it all.
The tree supports and centers our relationship with the Earth and reminds us of our own connection to the sacred life source. In the tall and stately tree we can see a projection of our own best selves. We aspire to stand strong like the tree. Proud and erect, our foundation planted firmly in solid rock, we weather the storms that swirl around us. Our stance is solid yet supple. Flexible, our outward, upward reach extends, bends always toward the light.
We, too, manufacture our sustenance from the sun. And so do we, just like the tree, nourish and provide and shelter and heal those who depend upon us. We share the very breath of life with the tree, an ongoing exchange of air. If the tree sickens and dies, so do we. We are the tree. We are the Family Tree of Humanity. May we grow together to be the Universal Tree of Peace.
Arbol de la esperanza
mantante firme.
Tree of hope
keep firm.
– Frida Kahlo

Donna Henes is a spiritual leader specializing in rituals and writings in support of personal and planetary transformation. She is an internationally renowned urban shaman, contemporary ceremonialist, spiritual teacher, award-winning author, popular speaker and workshop leader whose joyful celebrations of celestial events have introduced ancient traditional rituals and contemporary ceremonies to millions of people in more than 100 cities since 1972. Henes composed the first and only satellite  peace message orbiting in space.  has performed a Purification Ritual for Obama’s first inauguration, a Blessing of the Fleet for New York’s Quadricentennial, and leads the annual Greenwich Village Halloween Parade with blessings.She has published five books, a CD, an acclaimed Ezine and writes for The Huffington Post, Beliefnet and UPI Religion and Spirituality Forum. A noted ritual expert, she serves as a ritual consultant for the television and film industry. Mama Donna, as she is affectionately called, maintains a ceremonial center, spirit shop, ritual practice and consultancy in Exotic Brooklyn, NY where she  offers intuitive tarot readings, spiritual counseling and works with individuals, groups, institutions, municipalities and corporations to create meaningful ceremonies for every imaginable occasion.

Like Loading...
‹ May is the Month of Mary by Mary Jane Miller
Women’s Bodies and the Bible by Janet Maika’i Rudolph ›