Home › Books › Mother-Love: A Review of Rosemary Daniell’s THE MURDEROUS SKY: POEMS OF MADNESS AND MERCY by Joyce Zonana

Mother-Love: A Review of Rosemary Daniell’s THE MURDEROUS SKY: POEMS OF MADNESS AND MERCY by Joyce Zonana

She’s been called a “national treasure” by Bruce Feiler and lauded by Erica Jong as “one of the women by whom our age will be known in times to come.” The author of three books of poetry, a novel, several memoirs, and several books of nonfiction, she is the founder of the revolutionary “Zona Rosa” writing workshops and retreats that have helped hundreds of participants—mostly women—become published authors.  For many years she led writing workshops in women’s prisons in Georgia and Wyoming, and served as program director for Georgia’s Poetry in the Schools. Her work has been featured in numerous magazines and newspapers. And yet Rosemary Daniell is not as well-known as she deserves to be—perhaps because she is a fiercely feminist Southern woman who unabashedly celebrates her own sexuality while also bringing her formidable intellect, wit, charm, and compassion to bear on her approach to writing.

I confess. I’m one of the lucky women who has been profoundly touched by Rosemary Daniell’s bold writing and generous teaching. Back in 2000, she spoke at the University of New Orleans as part of a “Women’s Life-Writing” lecture series I had helped to organize. We’d invited her to discuss her deeply moving memoir about her mother’s life and death–Fatal Flowers: On Sin, Sex, and Suicide in the Deep South. After her talk, she led a writing workshop, using “exorcises” drawn from her books: The Woman Who Spilled Words All Over Herself: Writing and Living the Zona Rosa Way and Secrets of the Zona Rosa: How Writing (and Sisterhood) Can Change Women’s Lives. With one brief comment, she freed me from my long struggle to find my voice for the memoir that would eventually be published as Dream Homes: From Cairo to Katrina, an Exile’s Journey. Afraid to hurt my parents, I had been withholding the difficult truths about my family. Daniell put it to me bluntly yet lovingly: tell your story, and let them tell theirs! Since then, I’ve attended additional workshops led by Daniell and for many years I was part of a women’s writing group in New Orleans that modeled itself on her Zona Rosa work. 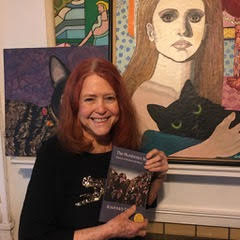 Rosemary Daniell in front of her daughter’s paintings

And so, I’m delighted now to be able to write here about Daniell’s latest collection of poetry, The Murderous Sky: Poems of Madness and Mercy, recently published by Lavender Ink, and winner of the 2019 William Faulkner-William Wisdom Poetry Prize. 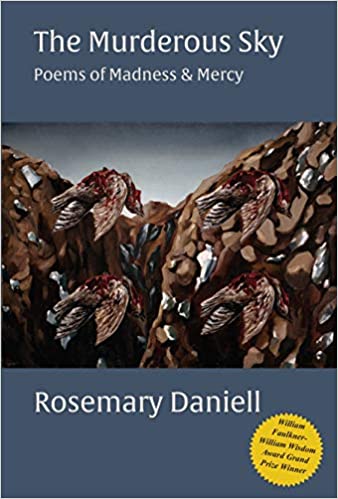 Taking its title and its cover image from a disturbing painting by René Magritte, this is, as Daniell calls it, a volume of “madness and mercy,” featuring poems that explore in searing detail the author’s aching love for a bipolar, drug-addicted artist daughter and a paranoid schizophrenic musician son who died too young.

“I had a daughter once,” the first poem begins, “beautiful and raven-haired,” with “face as fair as pearl.” The fairy-tale opening quickly transmutes into a nightmarish account of that same daughter, now a “woman / sodden & raging    taken / in handcuffs    the small blue stars / of needle tracks at elbow / and ankle & wrist.”  Those “small blue stars” of needle tracks are an astonishing, characteristic touch: a glimpse of fragile beauty amid brutal horror. In another poem, Daniell likens the needles wrapped in cellophane to “deadly candies,” again linking pain and pleasure. Similarly, the son whose arm she “once cradled   dimpled & plump,” now “hovers above” her, “hard   brown   muscular,” convinced that murderers are out to get the two of them.

Numerous poems detail the charm of Daniell’s daughter, naming the “sacred things” that include a snapshot of her “at three” in a “red / velvet bowler,” or later, “striding / up Fifth Avenue   in high heels / & short fur.” But that was before Daniell watched the same daughter “stepping off that Greyhound / eyes purpled by a fist.” Or before the son, a gifted guitar player who “holds the audience enthralled” turns to drugs and is diagnosed with terminal cancer.

It is almost too much for the reader to bear, and one wonders how Daniell herself has borne it, realizing that “the power of [her] love can’t save” these two precious, vulnerable children, “no matter / how hard” she “tug[s].”  Doctors, rehabs, money, prayers, medication, faith, all fail. It is only language, the craft of writing, that saves her, and blesses us. Waiting for news of her daughter, “ a woman whose pain I feel / as though it is mine,” fearing she might be found dead, Daniell sits by a phone “silent as stone”:

to dam what may come crashing     crashing in.

To her surprise, startling beauty breaks through—“a few yellow buds / & two full-blown purple crocuses with butter centers / right where the ice was last week.” “Miracles do happen” and “rapture blaze[s] where even this pain is.”

The questions these poems ask—“why?” and “how can I help?”—have no answers, although Daniell persists in asking them, inviting us to share her despairing journey and ultimate redemption. Because her pain, her persistent mother-love, does in fact lead to a kind of peace: “What do we learn from the inexorable landscape?” she asks in a short poem titled “Wyoming”:

Only what the animals have always known—

Deceptively simple, Daniell’s poems linger in the mind, enter the blood, with stunning images and subtle rhythms. Ordinary moments become occasions for profound meditation; analogies are mined, comfort gleaned. We read and re-read, experiencing, with the author, both madness and mercy:

of a mountain      as distant    as self-contained

This week, I’ve also been reading French feminist theorist Hélène Cixous’s inspiring Three Steps on the Ladder of Writing. In it Cixous reminds us that “we need the books that hurt us,” books that “strike us like terrible events,” written by writers who “play with fire . . . sometimes go as far as catching fire, as far as being seized by fire.”  Daniell is just such a writer, committed to a dangerous, difficult, fiery truth-telling, offering readers a descent into her and hence our own depths, where we too might find the “beautiful things” we may never have known we needed.

Joyce Zonana is a writer and literary translator. Her most recent translation, Tobie Nathan’s A Land Like You, is available from Seagull Books. Her memoir,  Dream Homes: From Cairo to Katrina, an Exile’s Journey was published by the Feminist Press. Joyce served for a time as co-Director of the Ariadne Institute for the Study of Myth and Ritual, and is a contributor to the Abbey of Hope’s Reflectionary, where her writing is accompanied by Deborah Saltz Amerling’s luminous artwork.

Like Loading...
‹ Blue Is My Favorite Color by Marie Cartier
The Utter and Undeniable Need For Walls of Compassion. Still. by Karen Leslie Hernandez ›