Home › Abuse of Power › Please Excuse Me for Having a Penis: Taking a Back Seat to Privilege and Power by John Erickson

Please Excuse Me for Having a Penis: Taking a Back Seat to Privilege and Power by John Erickson

I have often struggled with that little voice, call it my conscience if you will, that speaks to me during times of distress.  Although I consider myself a proud feminist, I still struggle with aspects of what I call, internalized misogyny, or more aptly defined as a male born characteristic trait that imparts the idea that men are not only dominant but also more powerful than the other 50% of the species.

For many reasons, I believe religion is one of the main culprits of this growing evil, one that we all witnessed throughout this last election cycle.  However, instead of placing blame solely on religion and images of the male Godhead we have to begin deconstructing the sociological consequences these subconscious social, sexual, religious, and gendered norms have on men but more importantly men who identify as feminists. 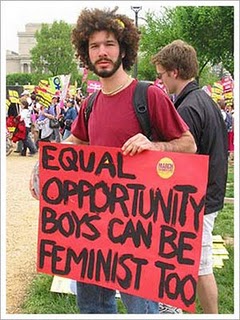 I was recently on a panel at the National Women’s Studies Association’s annual conference in Oakland, CA that discussed the issue of having a Men’s Caucus at the annual convention.  Officially becoming a caucus provides the group with an official vote on the board and a possible say with the future direction of the NWSA Conference.  Staged against Robert Jensen, who argued against the formation of such a caucus, I took on the position of the need for such a body to exist, to reexamine the growing field of masculinity studies as well as the growing number of men or male identified individuals who have been coming to the conference in recent years.

As more men become involved in women’s studies and more women start taking an interest in the growing field of masculinity studies, men and women alike have to start examining the reasons why men in feminism is both beneficial to the field as well as being useful in changing the ways in which men, women, boys and girls all interact with each other and construct their individual social, sexual, and religious identities.

However, as many scholars and activists have point out, while men continue to engage in feminist discourse, we still have to remind ourselves, on a daily basis at times, that even though we may be a minority within the safe space of the NWSA Conference, the moment we step outside the doors of the conference hotel, we are no longer the minority but again the majority.  Male feminists must take a back seat to the inherited privilege and power that is given to us within social and religious circles and remind ourselves each day why we chose to become feminists and more importantly why we continue to fight against our internalized misogyny that silently whispers to us that “we deserved” whatever position or opportunity we were passed over for simply because we have a penis.

Male feminists must be aware that we not only engage in an ongoing struggle against sexual and gender inequality, but more importantly an ongoing fight with ourselves.

Previously discussed at the Gender, Society, and Change Conference at Claremont Graduate University where myself and other scholars discussed “masculinities,” sometimes, always raising our hand in class may not be the best option and sometimes always speaking our mind does more harm then good, but in the end, the fight continues and it is within the space of the fight that we begin to not only occupy and navigate through the delicate area of power and privilege but also into a new world where men and women no longer have to take the metaphorical back seat but can operate and function in a world together, equally.

(This post would not have been possible without the support of two dedicated scholars and activists, Brian Jara and Tal Peretz (the moderator for the panel mentioned above) who proposed the idea for the panel and have, like myself, been at the forefront of the issues surrounding men in feminism.  I am grateful to their dedication and honored they asked me to serve on the panel alongside Robert Jensen)

Like Loading...
‹ Sappho Chose Love Not War, What Will You Choose? by Carol P. Christ
Confessions of a Former Sex Worker by Anonymous ›