Home › animals › The Dog and the Divine by Ivy Helman

The Dog and the Divine by Ivy Helman 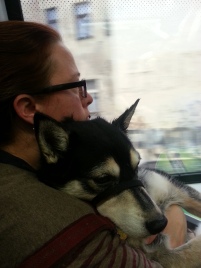 When I was in high school, I once gave a speech summarizing what I had learned about G-d through my dog.  I still chuckle at the idea.  I cringe sometimes and wonder what others thought of the piece.  Oh, the seeming immaturity of such an idea and perhaps naiveté.  I’m still embarrassed by my high school self.

The connection, on which I drew, included some of the ways I had come to love my four-legged friend as well as the way I interpreted his actions as love for me.  I remember I had a list of ten things my dog had taught me about the divine.  There was definitely a mention of unconditional love, being happy to see me, probably something about not being angry or ever holding a grudge, sharing secrets, perhaps a lesson on patience, and, of course, many more which I can’t remember.  This is beginning to sound like my blog post about Hanukkah, isn’t it? What were the other two nights?  What were the other six comparisons?  Oh, never mind.

Nevertheless, as I cringe, I also think I was onto something there.  I know the whole idea that dog is G-d spelt backwards.  So, of course, two and two together, why wouldn’t that be an obvious association?  But actually, at play, there is something much deeper to the idea than some English language twists. Besides, in none of the other languages I know both words for – Spanish, Czech, French, Hebrew, German – have such a language connection between the word for dog and the word for G-d.  So let’s put that aside.  Rather, I think the real connection comes from the biblical pasukim (verses) which draw together humans, animals and the Creator, Bereshit (Genesis) 1:26-28. 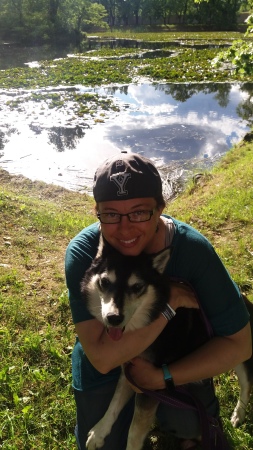 Mini and I in Cesky Krumlov

In parshah Bereshit (Torah portion Genesis 1:1 to 6:8), after humans were created, G-d rested and re-souled from all the work the Holy One had done.  But before the rest, G-d gave humans power over all of creation, including animals.  This is where cringe-worthy material enters the picture.  Why compare G-d to some “thing,” over which G-d gave us power?  Because if we took the comparison one step further, it could suggest the following: if we have power over animals, then comparing animal characteristics to truths about the nature of the divine also means suggesting that humans have power over G-d.

These lines of thought plunge us into the very muddy waters of cringe-worthy dualistic thinking, dualistic thinking that divides humans from animals and creation from Creator.  As feminists, we both want and need to move away from this.  First, we cannot consider ourselves better than animals for we too are animals.  Second, we are part of creation so how can we be separated from it in order to assume power over it.

In other words, overvaluing humans and subsuming power over all of creation permits controlling behavior, abuses, exploitation, maltreatment and more.  But, if we didn’t have this sort of mentality, perhaps comparing the relationship between humans and the deity to that of humans and dogs wouldn’t be so troublesome or “cringe-worthy” as one might assume.  Let’s examine three examples.

First, we could see the mutuality in the relationship; humans do not own dogs rather we each benefit from each others’ company.  I give her food, water, hugs and walks.  She gives me wagging tails, wet noses and furry companionship.  The Holy One doesn’t control us or own us.  We freely entered into our covenant with G-d.  We are partners co-creating the world around us through the mitzvot and rejoicing in our relationship through prayer, celebrations and dedication. 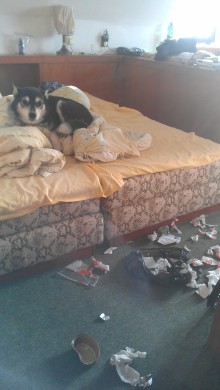 It’s looking a little messy down there.

Second, we could see the ways we might, even unintentionally, hurt one another.  When my dog gets frustrated because she’s been left home all day with little time outside or little attention from me, she barks.  A dog who never barks, her frustrated bark (and the very fact that she is barking at all) says everything.  She reminds me of the commitment I made to her and my need to act in order to fulfill my side of the deal.  There are little reminders throughout the day of the commitment we made to the mitzvot and the need to act in order to fulfill them.  We should bark loudly at decisions that create inequality, foster racism, turn away the refugee and build up the mechanisms of militarism and violence.  Bark away!  Bark until they have no choice but to listen because they can’t stand your barking any longer!

Finally, we are on this journey, we call life, together.  I

don’t think when I adopted my dog that I would ever have thought she would accompany me when I moved to Europe.  She also travels with us to various countries, climbing the snow-capped Tatra Mountains in Slovakia, walking the bustling streets of Berlin and hiking through the forests of Sumava National Park.  While she won’t live as long as me (no matter how much I wish it), we are deeply committed to each other no matter how much time we have together.  There is no place without the divine presence.  We are not eternal.  Here, we are the dogs and the divine is us.  I only hope to be as faithful of a companion to the Creator as my dog is with me.

Being in the moment, soaking up the sun.

So, here I am again comparing my dog with the divine.  This time it feels less cringe-worthy because models and understandings of the Holy One that would belittle these insights play into patriarchal dualisms which situate humans over animals and divinity over humanity.  Rather we are partners and companions on this journey.  We each have roles to play and tasks to fulfill.  How we understand the divine, humanity and animals directly shapes what we think our earthly mission is.  I prefer the version with the dog and the divine.  Do you?

Ivy Helman, Ph.D. is feminist scholar and faculty member at Charles University and Anglo-American University in Prague, Czech Republic where she teaches a variety of Jewish Studies and Ecofeminist courses.  She is an Associate of Merrimack College‘s Center for the Study of Jewish-Christian-Muslim Relations and spent many years there as an Adjunct Lecturer in the Religious and Theological Studies Department.  In addition to teaching and research, Ivy spends considerable amounts of time learning Czech, painting, drawing, creating new kosher delicacies and playing with her dog, Mini, and cat, Gabbi.