On Pronouns and Liberation in the Classroom by Ivy Helman 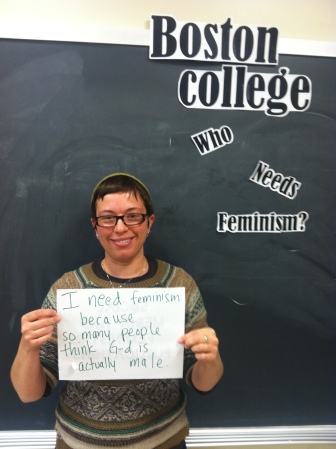 In my introduction to Christianity class, almost every one of my students (who come from diverse religious backgrounds – primarily Roman Catholic, Protestant and Muslim), continues to believe that the best image if not the only appropriate image for G-d is male.  When probed they may speak generically about G-d as genderless, an entity or spiritual presence of some kind, yet conclude by affirming their belief that G-d is male often by adding something along the lines that G-d is best described as Father.  Some go so far in these affirmations that they articulate G-d’s maleness as fact.  It never fails that every semester I struggle with how to address this basic feminist issue within the classroom.

At least as early as 1973, Mary Daly, in Beyond G-d the Father: Towards a Philosophy of Women’s Liberation, articulated the problematic basis of the relationship between gender and divine imagery.  She argues that “If G-d in ‘his’ heaven is a father ruling ‘his’ people, then it is in the ‘nature’ of things and according to divine plan and the order of the universe that society be male-dominated.”  In other words, if maleness is associated with divinity, then the power, domination and running of society by men seems to be divinely ordained.

To counter this underlying problem within patriarchal religious traditions, some feminist scholars have suggested balancing masculine and feminine images for G-d. This too can be problematic as the feminine sides of a given deity are often understood to be lesser.  Rosemary Radford Ruether expresses this well in Sexism and G-d-Talk: Toward a Feminist Theology: “We need to go beyond the idea of a ‘feminine side’ of G-d, whether to be with the Spirit or even with the Sophia-Spirit together, and question the assumption that the highest symbol of divine sovereignty still remains exclusively masculine.”  Others, such as Sallie McFague in Models of G-d, have argued that Christianity (and other Abrahamic faiths for that matter) needs models of G-d that are free of king and judge imagery associated with “power-over” ot

hers.  At the same time, many feminist scholars, finding their received religious traditions too patriarchal to be changed, have walked out of them to make new rituals and from new communities focused on the worship of a Goddess instead.

Forty years later, I continue to encounter students who do not understand the power of language to shape our perceptions, our assumptions and our everyday lives.  In other words, these students do not understand the link between pronouns and liberation.  Most have never heard of this problematic association between gender, power and divinity nor had the opportunity within their religious educations to think about G-d outside of the proverbial male box in which patriarchal religious traditions have enclosed “Him.”  When we confine the Holy One in a box and continue to explain G-d’s power as power-over, we not only do a disservice to G-d but we are also frustrating and delaying the global liberation of women.  In addition, we are supporting patriarchal forms of domination, power and conquest that form the basis of racism, classism, heterosexism, colonialism and environmental destruction.

From a practical perspective in the classroom, I have struggled with how to introduce and foster productive conversations about the ramifications of exclusively male-gendered language for G-d.  As the professor, I conscientiously and consistently use only gender neutral language for G-d by substituting G-d for every use of a male pronoun referring to G-d in the Bible and our textbooks.  Nevertheless, from day one my students call G-d he.  I am not sure it registers that I never do.

A few years ago because of a growing frustration with the seeming lack of effect that my personal word choices had on students, I experimented for two semesters.  I confronted the issue the first week of class by introducing feminism’s critique of G-d’s maleness and asking every student to speak and write about G-d as gender neutrally as possible.  To that end, I also included a policy statement in the syllabus requiring gender inclusive language for humanity as well as G-d.  Then I went on to teach the rest of the class as I normally did with a few reminders of my inclusivity policy when it was violated.

Almost every student evaluation I received mentioned my call for inclusivity.  They believed it to be pointless, exhausting, bothersome, annoying or just plain overdone and unnecessary, even when it was clear they understood why we did it.  Most didn’t think it was that important anymore since women had made strides in so many walks of life.  Using “one” instead of “he” to represent the generic person and substituting “G-d” for “he” seemed to be just too much for them.  Even those raised Roman Catholic who understood the direct connection between gender discrimination, the priesthood and the maleness of Jesus and his disciples did not think new imagery, concepts or gender neutral language for G-d was really necessary. 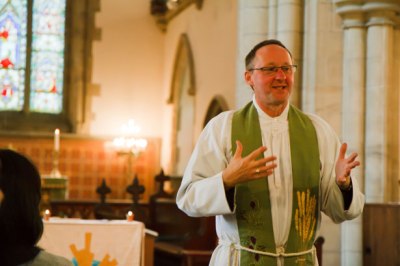 Needless to say, as a feminist and a religious scholar who wishes to advance the liberation of humanity from all forms of oppression as well as someone who wants liberatory religious traditions for us and the planet, I was and have been extremely saddened and frustrated.  This was one of the earliest critiques of patriarchal religion by feminists, and it is nowhere near being settled or even clearly understood by many members of the next human generation.

So, I took it out of the syllabus and out of most of the class.  While I still use only gender neutral language for G-d and humanity, I save the discussion about G-d and gender for the last week of class.  By then, the students seem to have an educated enough understanding of Christianity and its history that they are able to think more open-mindedly about the use of language.  The discussions go better and the evaluations do not focus on it as a problematic or annoying issue within the class.

I’m not sure why exactly that is, but I have a few ideas.  First, leaving discussion about the gender of G-d to the last week makes it seem tangential and therefore not as important as everything else the students learned all semester.  This seems to make the topic safer to consider.  Second, I approach the conversation as a hypothetical suggestion.  I am cautious as I speak and use language in which I suggest that the students think about these critiques.  I imply that they do not have to believe them although I am clear about the fact that I do.  Finally, I have come to find that one concrete example offers them a look at the relationship between gendered ideology and power: the male-only Roman Catholic priesthood.  I layout the reasons given by the Roman Catholic Church as to why women cannot be ordained.

I believe it to be a combination of these three tactics in the classroom that facilitate a good and productive discussion about gendered imagery for the divine.  This is nowhere near perfect.  However, I figure that if I have raised the consciousness of even two students in my classroom about the relationship between power-over and  gendered language for G-d, then I have made a contribution to the advancement of feminism in religion.