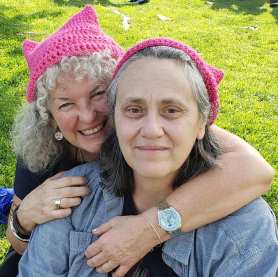 Photo of the author (left) and her wife Kimberly Esslinger

Here we are at the fourth now annual Women’s March. I have done a photo essay of the March every year for Feminism and Religion (FAR), the first two from the Los Angeles March, and the last two from Orange County.

I’m taking a break this month from the series “In These United States” poems I have been delivering to FAR (back with more poems next month) to showcase some of the activism, commitment, humor, and courage that showed up at the March I attended in Santa Ana in Orange County, California, January 18, 2020.

In this part of these United States the marchers chanted, danced, laughed, and were very serious. Santa Ana is a densely populated city where almost 62% of the population is Mexican. This evidenced itself in the March where for the first time I saw ballet folkloric by a company dressed in traditional folkloric costumes, in suffrage colors.

There were a lot of young children at the March as well as newly minted voters ready to create change. See for yourself—a dedicated mini version of RBG and Harriet Tubman. Native dancers. Savvy politics. Welcome to the OC Women’s March and meet all those who rocked it… 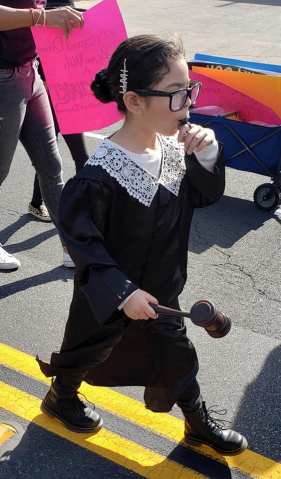 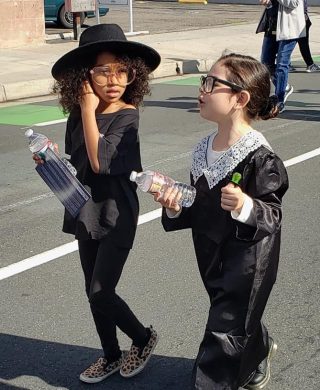 Photo Credits:
All Women’s March photos by Marie Cartier
Photo of the author and her wife Kimberly Esslinger by Margaret Smith
Marie Cartier has a Ph.D. in Religion with an emphasis on Women and Religion from Claremont Graduate University.  She is the author of the critically acclaimed book Baby, You Are My Religion: Women, Gay Bars, and Theology Before Stonewall (Routledge 2013). She is a senior lecturer in Gender and Women’s Studies and Queer Studies at California State University Northridge, and in Film Studies at Univ. of CA Irvine.

Like Loading...
‹ Wolf – The Call of the Wild by Judith Shaw
I’m Getting Triggered by the Impeachment Trial and I Bet I’m Not Alone by Janet Maika’i Rudolph ›